The Photograph and Australia, AGNSW till 8 June 2015

For anyone with an interest in photography, this exhibition at the Art Gallery of New South Wales (AGNSW) has to be seen, and then seen again.

As I was about to leave the exhibition, I heard someone say that the exhibition was great but very exhausting. I agree. It is a large exhibition with heaps to take in. The curator, Judy Annear, has presented a special view of Australian photography using a set of themes. This is not your usual survey show. Definitely not. It is not a linear journey through Australian photography with all the usual icons to tell the tale. Instead it is about a number of stories (themes) using a mix of photographs, known and not so well-known, including a hefty number of 19th Century photographs.

The curator has joined photographs through a variety of hanging methods and has made some very intelligent connections between images. There are sometimes hidden layers—some of which I picked up on and I suspect quite a few I probably missed. The exhibition hang is not the usual clothes line variety, it is very varied which adds to the enjoyment.

Here’s a few of the reviews:

From the Guardian – click here;  and The Conversation;  and the Australian.

The big positive was that there were so many photographs that I had not seen before or at least not very often. The mixed hanging definitely made you think about what the connections were — so for once you needed to read the wall introductions to get a handle on what was being focussed on. The strength of the 19th Century work became very evident and left you thinking how so many issues and style were already set by the time the modern era arrived.

I was amazed by the central room which house, in darkened light, by the high number of Daguerreotypes. Has Judy got her hands on just about all that there is on offer? There was so much to see in this room. I still do not know how she did it – as Daguerreotypes are often hard to look at because of the need for particular lighting. In this room they were all quite easy to observe. 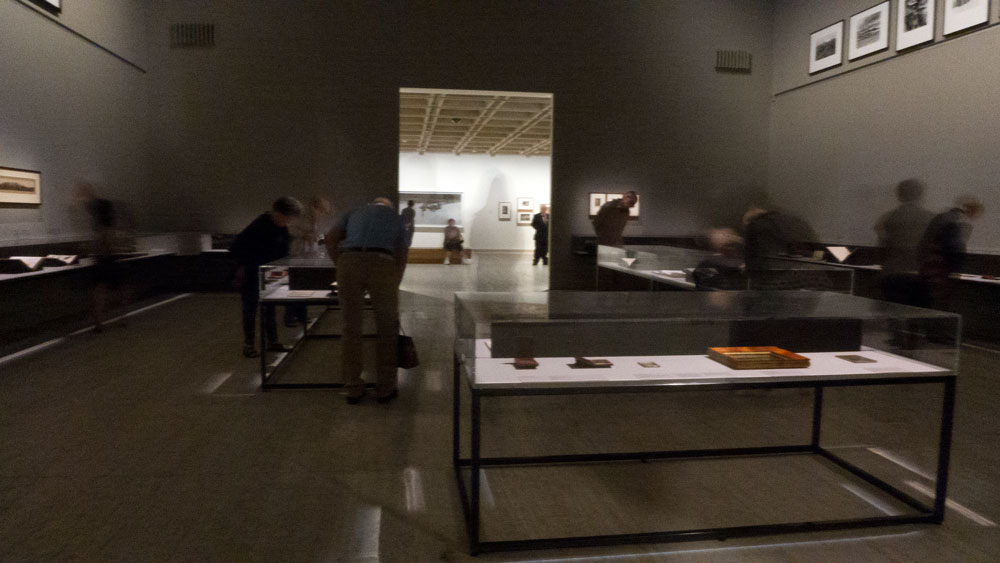 The photographs by Tracey Moffatt and Ricky Maynard looked down from on high at the room of colonial photographs. There was a message there!

Unfortunately while the positioning worked for one reason, they may have been just a little too high as it was very difficult to appreciate Ricky’s photographs. Despite that I had to return to this room for another look before I left as there were so many gems there.

One little surprise for me was the hang of the Sue Ford self-portraits. Last time I saw these was in Melbourne as part of the Victorian State Gallery exhibition on Sue Ford. In that exhibition I thought that the hang did not work and the self portrait selection was not all that enjoyable. Here in the AGNSW the same works looked great thanks to the very different hang and the context of this exhibition. Amazing how that works.

Maybe I was getting tired, but I thought the parts of the last room did not quite work. That video was a distraction. The rest of the exhibition was about viewing and honouring the artifact, the photograph. I enjoy looking at a work of art for as long as I wish. Any video is time based and you must stay for the prescribed time to view the whole work. I didn’t. I moved on after not giving it much of a chance.

Photography books are important for the medium as this is often the way so many people see images first. There was a very small introduction to this concept. I suggest we would have been better off with none or that there should have been much more.

The framing of the CDVs along one wall was the best I have seen for showing these small photographs. It looked great as one work. The photographs on display obviously came from one purchase. The quality was a bit mixed. However it was a good look although I doubt too many people will manage to look at all of them in detail as there are about 200 images.

So to finish a reminder. This is not a survey exhibition of the history of Australian photography. Many eras of photography are missing or just touched on slightly. Your favoured photographer may have not been included. So for some it may be a bit of an effort to get over not seeing their favourites.

The exhibition is based on a set of themes that focus you towards a particular point of view of photography and how it influenced Australia. It works if you take the time to read the images and to make the connections.

This is a great exhibition and full congratulations to the curator for her research and selections and ultimately for the wonderful exhibition and book. It is a great statement on how wonderful our 19th Century photographers were. I suspect a lot of people will now take far more attention of the 19th Century photographers and their influence on the subsequent years, let alone on Australia.

I also suspect that those contemporary photographers that were included will appreciate being seen in this context as there work is being viewed through a different lens having  being surrounded by so many historical photographs.

We need more exhibitions like this where the curator makes a selection not by covering all bases and not including the usual suspects,  but by creatively choosing photographs from the most relevant parts of  the whole history of photographs in order to illustrate a point – or two or three.

Once I get the chance to read the book, I  will be returning for another look.

Remember it closes 8th June – so allow time to see it and then to return.

Here’s a link to the AGNSW site – click here.