A new future for the Aboriginal Tent Embassy in Canberra

The tent embassy has had a mixed history since the first one was established in January 1972 in Canberra right in front of the former Parliament House. There is a reasonably full history on wikipedia – click here. It is worth reading.

Presently the number of tents varies as does the level of activity. Over the years I am aware that the government as well as the National Capital Authority have had discussions about its future. Nothing has changed except for the comings and goings of the residents.

When the tent embassy was original established it was in front of the Parliament House and was able to gather the press easily on any occasion to deliver a message. It was indeed a frequent and effective thorn in the side of many of the governments. 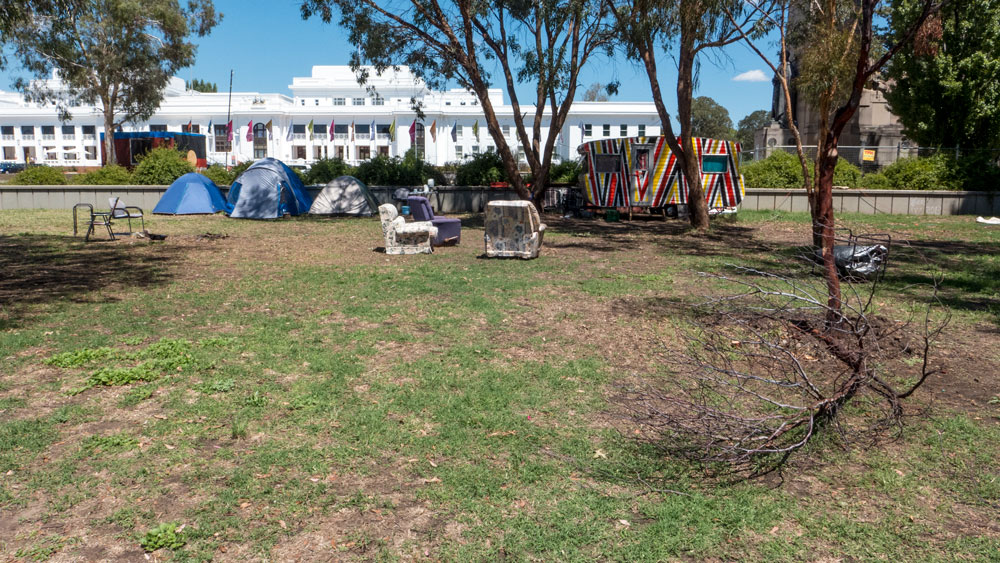 When the Houses of Parliament moved up the hill, the tent embassy has remained on the original site. The embassy did not move. It no longer has the same message of being an in-your-face form of protest and reminder to the politicians as they come and go. I would even suggest that many of the current crop of politicians would be unaware of its presence.

Tourists often stop at the top of the Old Parliament House steps and take a snap or may wander down to the roadside for a look. Few venture much closer. Often there is no-one in residence to greet them. 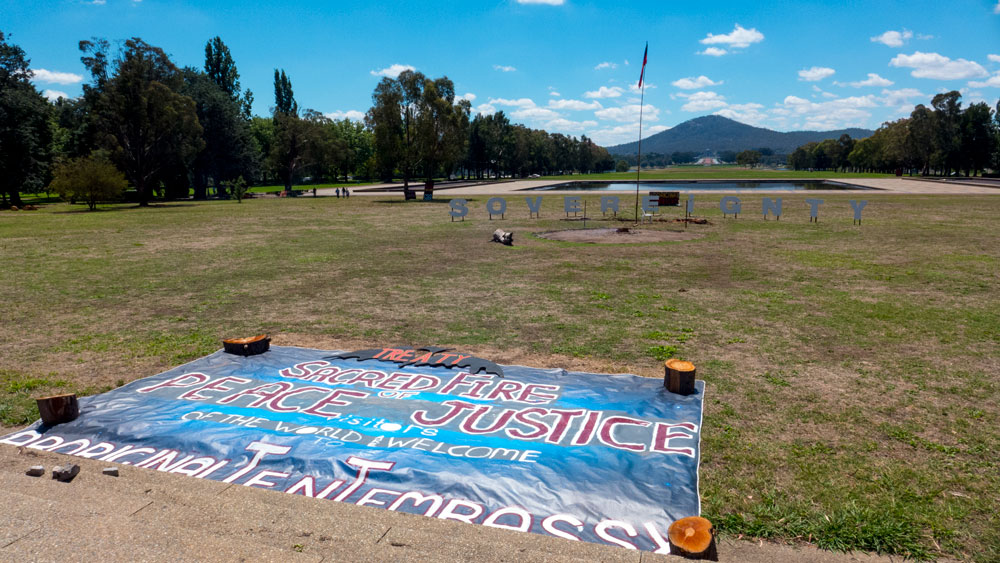 There is usually a few messages available for the tourists to read. This could be a banner or two and at times some artwork is scrawled on the pavement. But these do not last long. 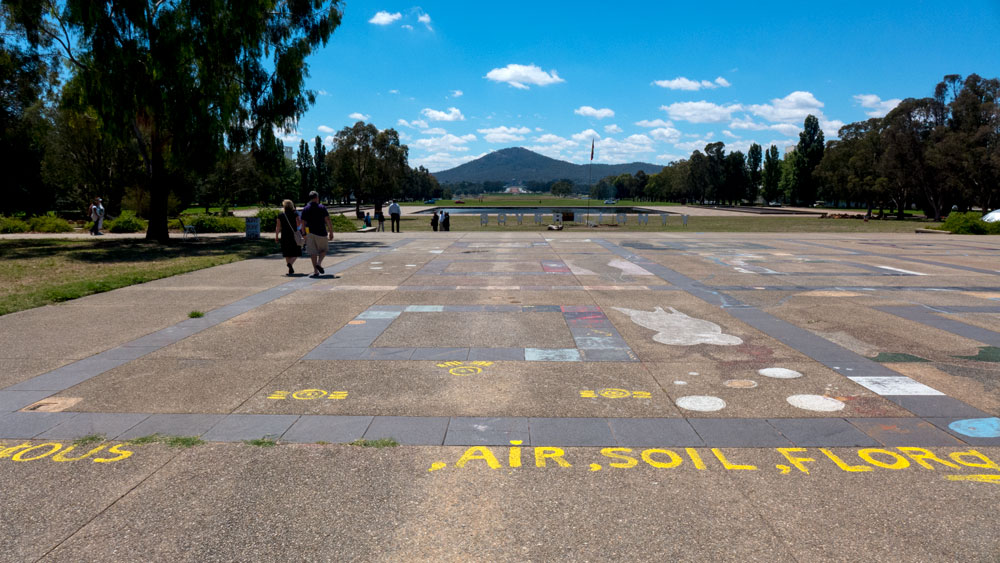 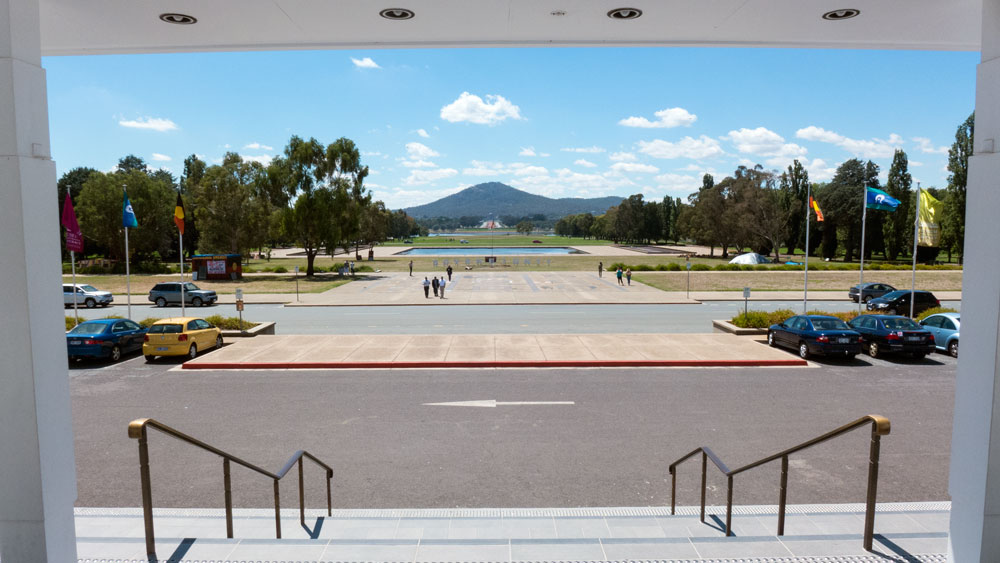 The proposal for a permanent Indigenous Embassy in Canberra

I am now proposing that the time has come to do something about the temporary nature of the Aboriginal Tent Embassy.

As you can see from the image above, the view across the road, across the lawns and ponds to the far landscape is a key point of view from the Old Parliament House. You can see the hut to the left and behind that are the current crop of tents and the caravan and the portable toilet. There are temporary artworks on the pavements where those people are walking.

Given that the indigenous peoples are the original owners of this land, I am suggesting that a permanent building needs to be provided for an Aboriginal Embassy on this site. With careful design work, a building could be placed to the left to effectively be part of the landscape without hindering the major aspects of the view.

This first building should be positioned where the hut is right now to the left. It should be an information centre as well as have a function room for meetings and for special seminars.

Behind this building, on the lower level, there could be a set of special apartments for those who wish to be primarily responsible for the embassy.

The centre area should become a permanent landscape artwork. This artwork would most likely be some form of mosaic but this final detail would have to be worked out with the relevant people.

The whole set of buildings and associated artworks should become a permanent presence on this historic site.

This should not duplicate any research centres or archives already established. The present structures do not attract visitors beyond a curious few. This new proposal is for a very accessible and attractive indigenous embassy that will attract visitors to enter and to become informed of the complexities of the indigenous issues in Australia.

The first challenge for the National Capital Authority is to bring people together to put together a preliminary design brief. This concept would encompass the requirements of placing a permanent structure within the Parliamentary Triangle, the heritage requirements of the main axis views, the historic nature of the tent embassy and what it has been trying to achieve as well as the importance of recognition to be given to the complexities of the indigenous issues in Australia. There would be a significant architectural component, some important artworks to be planned for as well as very important landscape design elements.

If I wanted to be really optimistic, the landscape components of the brief should include removing the European lawns from the adjacent areas and replacing them with more appropriate plants to reflect the need to adapt for climate change and to use far less water.

This brief would then be presented to the Commonwealth for initial approval. In order that the whole project receive positive attention, the approved brief should then be subject to a very significant international design competition.

The new and permanent embassy should then become part of the national capital’s landscape and become a main attraction within the Parliamentary Triangle.