Once the devastating 2003 Canberra fires were over, the Canberra landscapes to the west of the Lake Burley Griffin were left denuded of the previous forest. The subsequent international design competition delivered a much celebrated design for a National Arboretum.

The ACT Government committed the funds and away we went. It opened later in 2013. Already it is a tourist attraction. It attracted a lot of criticism and this was all part of the uncivilized media campaigns of the last few years. The ACT has a labor government and so it was a target as well as the Federal Labor Government. But Unfortunately for the multitude of critics and associated nut jobs, the ACT did have elections during this period and the people have twice voted this government back in.

Full marks to the ACT government, led by Jon Stanhope and then Katy Gallagher, as they kept to its commitments to delivering this enormous Arboretum. Although it was understood that the present tourists and locals may not  see it completed, hopefully that will be the pleasure of future generations.

A professional promotion from an architecture blog – click here

I had read some of these promotional pieces before I visited the site. Sometimes it is better not to read these promotional articles before visiting as they do raise expectations. In this case, I was skeptical enough while reading all the spin in the available articles. But curiousity was heightened enough to encourage a visit

This I did for the first time during the Christmas break in December 2013. I had driven passed the site numerous times but from the road it has been hard to see what the progress has been. The two buildings had appeared this year and there were thousands of plantings dotted across the hills.

This image below is typical of those use in the promotions. It is a wonderful photograph taken by John Gollings. He has been lucky to have seen this view from above and maybe therefore saw the pattern making of the concept.

Most of us have to see the site from the ground and spend much of time looking up the side of the hills. The other big difference is that it was so green in the promotions. It definitely was not so when we went for our visit in December 2013. It was dominated by glorious Australian drought brown. 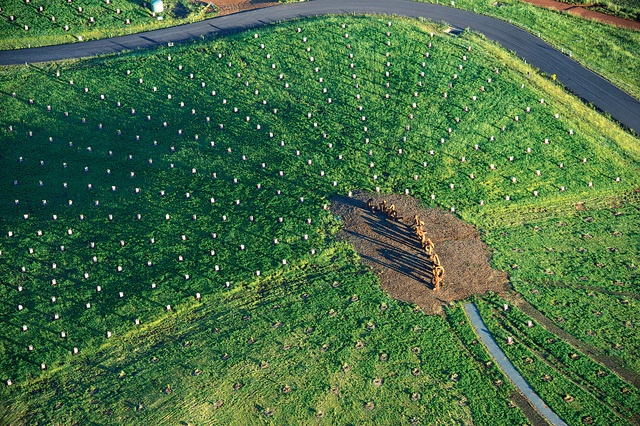 Today as you drive in, the image below is far more typical.

Here’s the same artwork that John Gollings photographed, as seen by visitors.

This is a major landscape site with a couple of buildings on it. One of them looks to be left over from the Sydney Opera House. The other, the visitor centre, cafe, restaurant and the attached playground, I passed by as it was full of the Christmas tourists. And we were there to look at the site and the arboretum, not just another visitor centre and cafe.

The playground thing looked amazingly over the top. I will have reserve my thoughts on that for a visit some time when the place is quieter.

The feeling I have is that the centre, the venue and the playground will attract tourists and visitors and will most likely be very successful as most such superficial fun fairs things are successful. Such is the nature of current tourism. I saw online that to park at the centre requires paid parking. That’s a bit odd.

Before I say anything else, the hills within this new site is a great place to take visitors to Canberra. The hills and the drive around the hills provide some very panoramic views across the inner city as well as of the far suburbs and the mountains beyond. When there is snow on the mountains, head up here for the view.

A little tangent. It seems that this site meant a lot to a local writer before the rest of us discovered it. Click here.

I have thought about this review for a couple of weeks. The concept of an arboretum may still be relevant to the 21st Century. However I suggest that most of the research on trees for the local climate has been done and is being done by our scientists. It is probably more relevant to get on with ensuring the future of the urban trees and even making sure that there is more than ample shade being built into all the new suburban developments.

This arboretum is bringing in trees from many national an international locations. There will also be a seed bank developed. Do we need a seed bank? I thought there were several very significant ones already established.

So I think I have concluded that this scale of arboretum as a scientific entity is now mostly irrelevant. So what have we been delivered.

In one of the reviews above, this arboretum is referred to as being more like a Zoo for Trees. The site is a long way from being this, but whenever it is completed and fully grown, this will be probably a correct description.

So what are tourists told: The National Arboretum is Canberra’s newest attraction. It’s a living museum, entertainment facility and events venue offering a unique visitor experience. Set on a 250 hectare site the Arboretum includes 100 forests of Australian natives and various rare and endangered trees from Australia and around the world. It’s also home to the National Bonsai Collection. Enjoy guided and self-guided tours, interactive displays, sculptures, Pod playground, a café and shop and picnic areas with outlooks to some of Canberra’s most spectacular views. The Arboretum is a great place to play!

The management of the arboretum has a more detailed descriptions online. click here

At least they place a little more emphasis on the trees. Most of the other promotions seem to have focused on marketing the site to tourists as an events venue, cafe, a viewing platform and a playground.. and oh yes, there are some trees.

The photographs top and bottom here are very typical of the current scenes over Christmas 2013.

I have to say that if you want to enjoy some time amongst some trees and sculpture, then you should head  to the National Gallery of Australia, see an exhibition or two or three and enjoy the NGA’s sculpture garden. Now if the NGA would get some decent picnic tables, complete with shade pergolas, into their sculpture garden then it would be a winner for locals and tourists looking for a place to rest and socialise with friends.

If you want to spend time with Australian trees and shrubs and go for a walk amongst them, and then have a coffee afterwards, I strongly recommend that you travel down the road from the Arboretum to the National Botanic Gardens. They are wonderful!

The National Arboretum Canberra. What do I think? The jury is well and truly still out on this one.

I think the original concept was a great exercise of landscape pattern making and very ambitious design for a representation of what an arboretum has become, namely a fun fair and zoo of trees. But as the trees actually grow, I may yet prove to be wrong.

I have come to the conclusion that the National Arboretum, while based on some flamboyant pattern making landscape design, it is in fact a model arboretum of the 21st Century. Its primary role will not be scientific research. Its role will be to be a folly – to provide entertainment, recreation and a chance to view. It will not really serve any serious purpose beyond tourism.

A folly, while having the appearance of being useful, is primarily decorative and has some form of exaggeration to such an extent that it transcends the normal range of ornamental design. In the original use of the word, follies that were  buildings or gardens had no practical use, beyond exaggerated ornamentation. So in this case, the national arboretum in Canberra is based on an exaggerated pattern making design that has been promoted as delivering a large scientific arboretum. The reality is that it will become a major folly, an ornamental tree zoo, that will be probably be a successful tourist attraction. This arboretum does not seriously address in any realistic way the contemporary climate change issues effecting Canberra and society.

Final word this time around (as I think I will be returning to this review later), I think there was a missed opportunity in the advice given the then Chief Minister. The arboretum was most likely sold to him as a national tourist attraction, and I agree that Canberra can do with even more tourist attractions.

I seriously think that with food security being such a priority, that this vast piece of land could have been a creative landscape design solution that also delivered local food to the area. Rather than a tree zoo with its much touted green wash and exotic tree elements, it would have been much better to deal with climate change issues and food security. I can image those hills with terraced fields with food growing as well as lots of trees and shrubs.

and click here for more on this project (and another architect award project) from a later blog posting.

Recommendation:
based on many hours of research and one visit in late 2013, Rating: 5/10

Recommendation: For the next few years or more, I strongly recommend instead a visit to both the NGA Sculpture Garden, and the National Botanic Gardens .

(and before you write, I know that the plural of arboretum is usually arboreta; however it can also be arboretums, which I prefer)