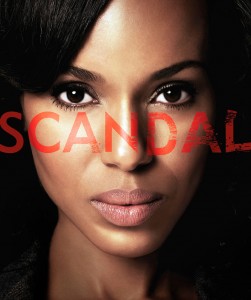 Trash TV is alive and well. There is real trash such as Revenge (a review some time soon). Then there are programs such as Scandal that come with a fictional framework with a touch of reality, that really tries to be serious, but moves back and forth from potentially being a reasonable political crime drama to a fluffy and unrealistic soap opera. It can be fun to watch but depends on your mood and what you are looking for entertainment.

Warning; We are half way through series two – so if you have not seen these episodes, spoilers may follow.

The plot’s framework is a combination of political and behind the scenes not-so-legal shenanigans as we are used to see with British political dramas mixed with a bit of West Wing or something similar concerning Washington, the President, his wife and the White House staffers, along with very questionable and dubious political scandals. The main character has jumped from being on the President’s staff to be a high-profile ‘Fixer’.

The whole series would have been stronger if more emphasis had been placed on her firm’s activities as fixers. There remains scope for all sorts of crime and political intrigues. Unfortunately the program is dominated by the lead, Olivia Pope, and her affair with the President. It gets a bit much at times. Would have been much better if the affair had been a thing of the past with on-going subtle tensions in their dealings with each other now.

Yes it is fiction, but the program leaps into story-lines which are composites of many of the stories, unreal and unbelievable, that happened around several presidents, their campaigns and their time in office.

In a few episodes back, in the midst of a crisis involving the President, Olivia just rolls back into the White House and assumes her former staff position. So much for security and so much for all the other senior staffers who just allowed this to happen. Maybe I will consider showing up in the offices of my former employer and take up my old role as soon I consider the former employer is off the rails. Can really see that happening!

Interesting to speculate as to how non traditional Anglo-American audiences view such fictional stories given the links to some contemporary goings-on within the US government circles. Even if it is fiction, the culture of the society in and around the US Government is definitely looking a bit weird. The program is really made for Americans who love conspiracy theories about how their country is being run. For the rest of us, it is a curious fictional spectacle.

I knew that there are cameras in the oval office and the instant I saw it about to happen. I am sure I was not alone in knowing that any use of the President’s desk for shared physical activities would be caught on camera. The newly elected President was not aware of this? Give me a break! Oh yes, it is fiction.

This is entertaining enough. You may need to have your mind in neutral at times. It is another reminder that people in a certain class behave differently to the majority. And for Australians, the US government looks even stranger than ours. Given the peculiar state of Australia’s federal government at the end of 2013, that’s saying something.

The rating below is in the context of the program’s type and style. It is a sometime annoying soap dressed up as a sometimes believable political and crime fictitious drama.

with occasional spikes of higher rating – so maybe at times 7/10.