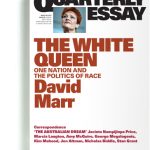 From the publishers: Most Australians despise what Pauline Hanson stands for, yet politics in this country is now orbiting around One Nation. In this timely Quarterly Essay, David Marr looks at Australia’s politics of fear, resentment and race. Who votes One Nation, and why? How much of this is due to inequality? How much to racism? How should the major parties respond to anti-immigrant and anti-Muslim voices? What damage do Australia’s new entrepreneurs of hate inflict on the nation?

Written with drama and wit, this is a ground-breaking look at politics and prejudice by one of Australia’s best writers.

I recommend this as being a good read – recommended for those looking for an intelligent insight into this whole strange event.

Trouble is that that those who read this will probably already know that the Pauline Hanson thing is a scam. They already know that she has not changed as a a person or in her fringe pretend policies (compliment to even use the word policies). People who read this already know that she has learnt to play the system better – she knows more about how to play the election game or how to get others to do it on her behalf (eg in WA elections) in order to increase the amount of money she earns from election. David Marr estimates her winnings now total about $7,000,000 since she started this gaming of the electoral systems.

But it is a good read and he presents loads of facts/stats to back up his views on Hanson.