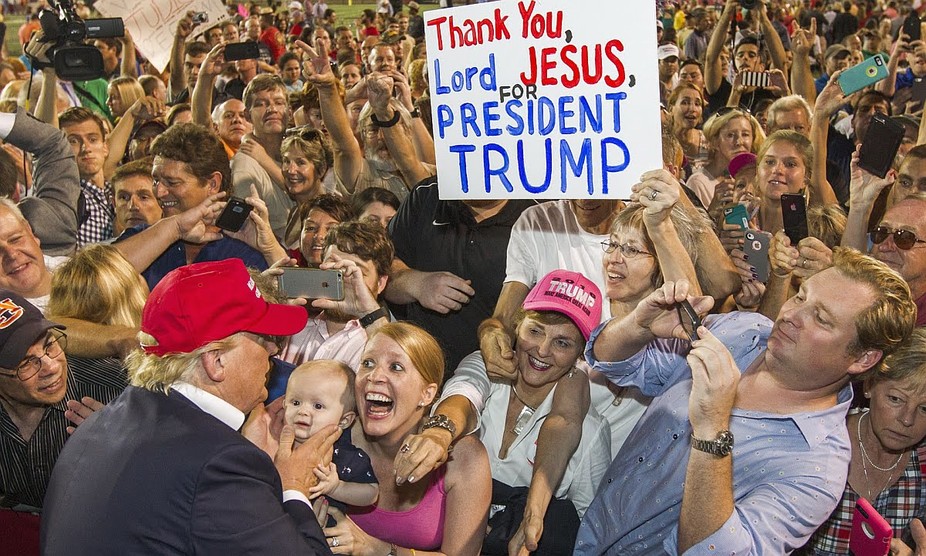 ( a note from Paul Costigan – Before you read the Clive Hamilton article below from The Conversation– – have a look at the photograph above. It is scary!)

Can we get real about the meaning of Donald Trump’s victory? The day before the presidential election everyone believed Hillary Clinton would win. The polls consistently showed she was some 3 or more percentage points ahead and she was leading in the key battleground states.

It had been known for many months that 40+ per cent of American voters would stick with Trump no matter what kind of tax-avoiding, race-baiting, crotch-grabbing outrage he committed. A mass of data showed their demographics, told us they were not confined to the clichéd “white working-class males”, and set out why they supported Trump.

We knew that American society was deeply divided, and that positions were fixed. Yet the day after the election every right-wing commentator in the land began braying about how America had shifted, of how “the American people” had spoken and they wanted Trump. Trump won, they announced, because the “sneering elites” are completely cut-off from the concerns of everyday Americans.

But nothing happened in American society between the day before and the day after the election. The unexpectedness of Trump’s victory was due to one phenomenon alone: around 3 per cent of voters who favoured Trump were unwilling to reveal their intentions to the pollsters. That’s all.

Yet in a slew of articles that would not have been written had the shy 3 per cent been more upfront, the pundits are telling us that the world has shifted. To be sure, the world will shift as a result of Trump’s win, but his win tells us nothing about American society and the state of the world that we did not know beforehand, when we all expected Clinton to win.

For politicians in other countries to begin recalibrating their messages and policies in response to Trump’s victory is absurd. How does the revelation of the shy 3 per cent in the United States change their understanding of their own societies and political divisions?

Many progressive analysts have fallen for the right-wing construction of a new world. Suddenly they think they must have missed something fundamental, some tectonic shift that was rumbling, undetected, beneath their feet.

The tectonic shifts that gave rise to Trumpism have been gathering force over the last six decades. Over that time, the left won the cultural battle and the right won the economic battle, and Trumpism is a reaction against both.

While the left from the 1970s was prosecuting its war on cultural conservatism, the right was winning in the economic domain. The Democratic Party as much as the Republicans either openly embraced, or felt it had no alternative but to accept, the deregulation, welfare cuts and free trade program of neoliberal economics. The story of the rise of neoliberalism in the 1970s and 1980s, not least the vital role of right-wing think tanks, is well known.

Backed by powerful interests in business, the media and academia, and with no apparent alternative, it soon became irresistible to politicians the world over. On taking office in 1992, President Clinton “put Wall Street in charge of national economic strategy”. By pandering to the self-interested claims of the masters of finance, Clinton did more to bring on the 2008 recession than President Bush.

And so Republicans and Democrats – not least Hillary Clinton – both embraced free trade agreements that seemed to suck jobs out of the United States. If Republicans more vigorously pursued the tax-cutting and welfare-slashing policies that gave rise to gross inequality, leaving many families struggling to get by, Democrats were not far behind.

As a result, the wealthy are richer and more powerful. Billionaires and big corporations have greater influence over politics. Leaving things to the market has had a devastating impact of great swathes of middle America.

Bernie Sanders wanted to change it, while staying with the cultural agenda of the left. But Clinton won with the left’s culture and the right’s economics.

While his criticisms of political correctness felt like a breath of fresh air to millions tired of being put on the back foot, at the same time Trump cut through with his heart-felt attack on “globalization” and vigorous criticism of economic policies that have enriched a few while impoverishing many. When economic nationalism combines with cultural pride, as in the case of the Mexican wall, the force is irresistible.

The industrial and suburban wastelands of the mid-West, the relocation of factories to Mexico and China, the return of Wall Street excess after the exposure of its criminal greed in 2008 – to the losers all of these look like a direct assault on the deeply-held belief that America is a place where everyone can get ahead.

Trump’s message resonates deeply with those who feel they have been on the losing side of both the economic battle and the cultural battle of the last decades. “You don’t win anymore”, he tells them. They feel deprived of their birthright, the American Dream. No wonder they are angry.

But, as Adam Haslett has argued brilliantly, beneath the anger of Trump supporters lies something deeper – shame, the shame of no longer being able to get ahead, the bitterness that their children will be worse off than they are, the resentment of being told they are backward, and fearing that they might be. Like Russian nationalists who put their faith in Putin, and Chinese patriots who back Xi, Americans who support Trump are responding to their private or collective humiliation.

The question now is whether President Trump can turn back the tide of cultural change, and successfully restructure an economy built on decades of neoliberal policies.