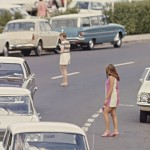 It was during a radio program on the future of Civic, the centre of Canberra, that an architectural academic came forward with his Big Idea on how this city centre could be refurbished. To my surprise the academic suggested that Civic’s pedestrian areas should be opened up for cars. I have to say that ‘architectural experts’ often speak on urban matters as if they are living on another planet.

Canberra has constantly suffered from a lack of an intelligent approach to transport. Today’s Canberra planning is dominated by transport bureaucrats who favour roads and cars. Other forms of transport receive a token amount of consideration. This all started with the bureaucracies of  the 1950s through to the 1970s who favoured cars to the extent that they planned freeways in and around Canberra. Public transport was not high on their agenda. The first bicycle paths came much later and were placed in such a way not to disrupt the dominance of the cars and their roads. This usually meant that they were not well used as they were not necessarily in the right place. Such is the way with Canberra planners then and now.

The centre of Canberra requires many new ideas to make it an attractive area again. It continues to suffer from the big box mall, the Canberra Centre, that former planners and the developers decided that was good for Canberra and which has since sucked the life out of the surrounding plazas. To even think that somehow introducing cars into these pedestrian areas is crazy.

I intend to write more soon about Civic, the centre of Canberra and how it requires some urgent actions from the politicians as the bureaucracy, being the planners, have failed.

Meanwhile the thinking is that dominance of cars needs to be challenged. He’s a debate from Sydney where the trend has been that building more expressways should solve all the traffic problems whereas the evidence has shown that all it does is to encourage more people to use cars. The history of transport decisions in Sydney is dominated by transport bureaucracies that favour cars over public transport, pedestrians and cycling.

Meanwhile there are many voices internationally that are talking about how city governments are starting to see that it is time to question the dominance of cars. Here’s an article for The Guardian – click here.