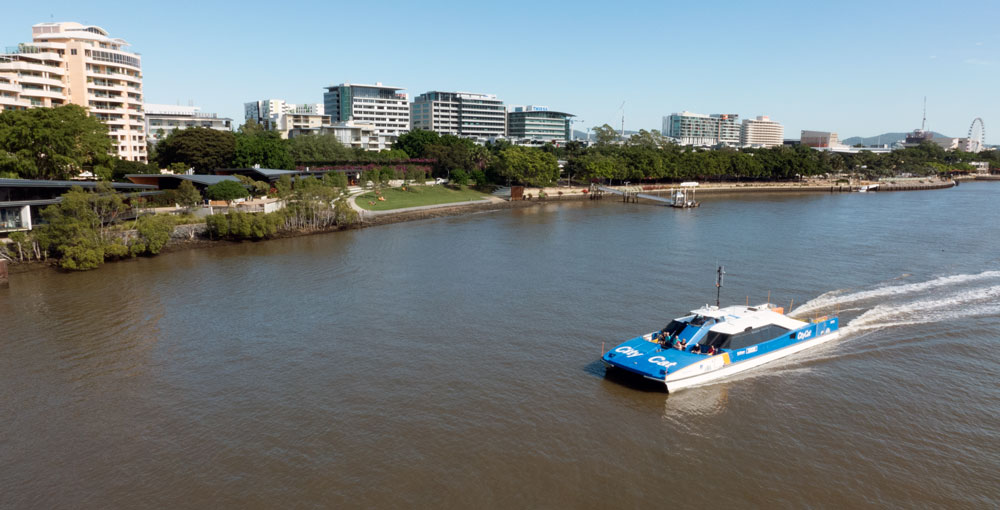 There is no doubt that there are aspects of Brisbane that a far more interesting than the city centre. South Bank and the West End are such places. South Bank Parklands have been managed well for years up till now – but I am not so sure about the current management.

South Bank is a place for leisure, for the family, for picnics, for food and cafes and the cultural centres, for events, and especially for culture such as visits to the state gallery.

West End is an older suburb with heaps of character. There are now many new developments underway and being proposed for West End and around South Bank. Most are not being built with any eye to fitting in. The character of these areas is changing for the worse.

To date the developments have been very much in the contemporary (boring) style with no relation to the area. The apartments and offices are the same models as anywhere else. There’s a lot of white, grey and beige with the token bit of greenery stuck here and there. So where are the architects and their stated aspirations to deliver on climate change and to deliver designed communities. They take the money and run! 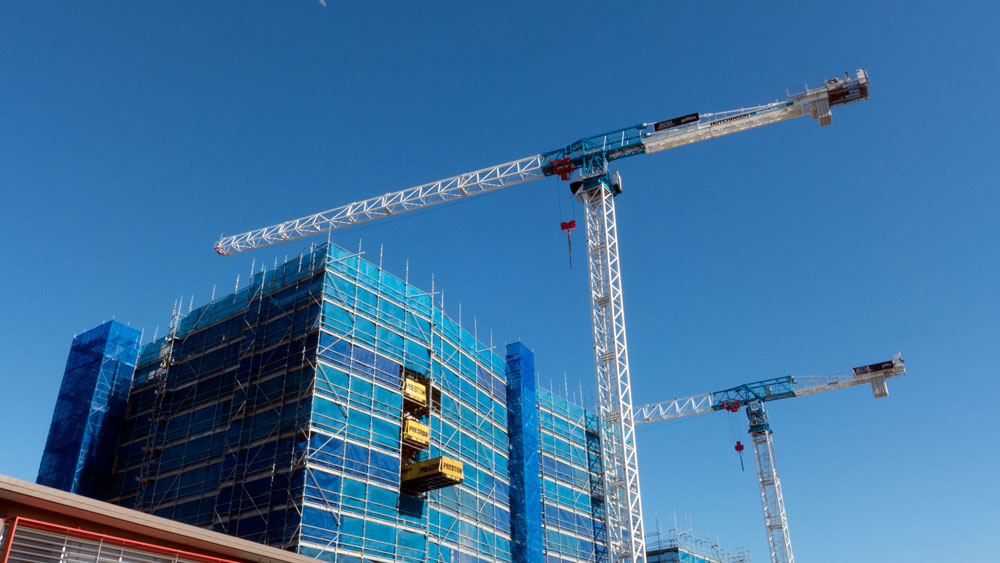 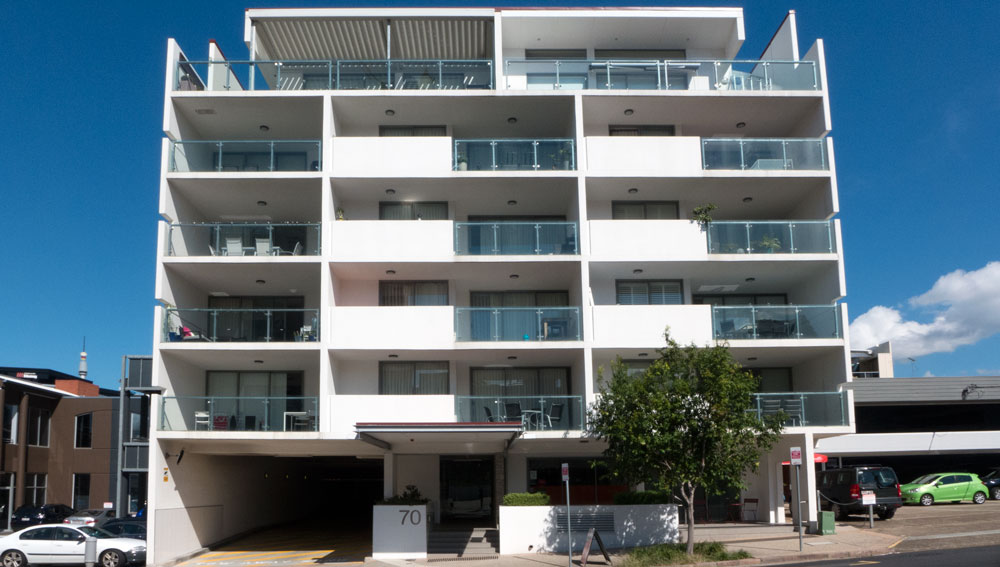 There are small pockets of exception to boring developments with one being a plot near South bank called SW1. The landscape works, or at least the plants, carry the architecture, which is very matter-of-fact.

Another positive is that there is good coffee and food served in this complex at a cafe called ERA. 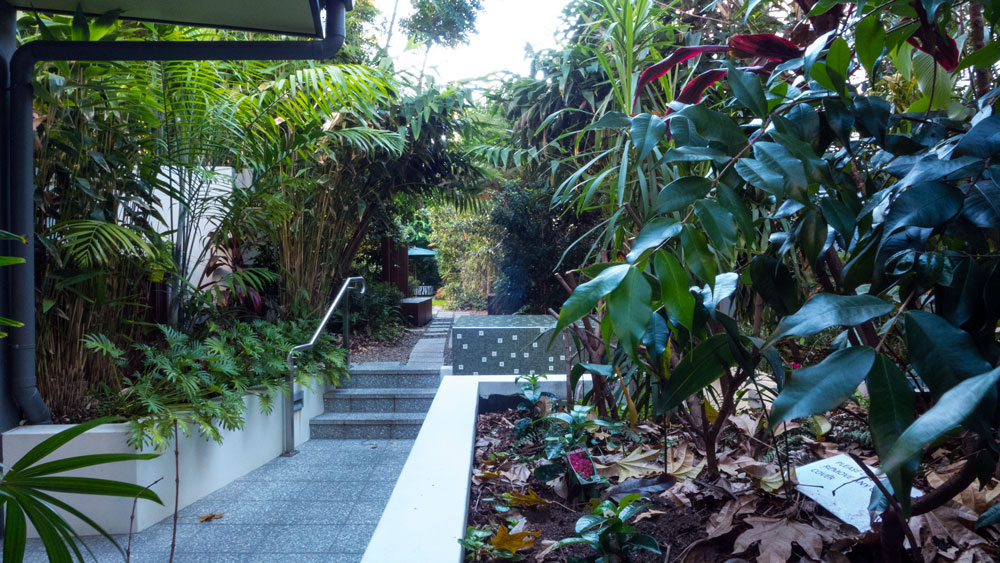 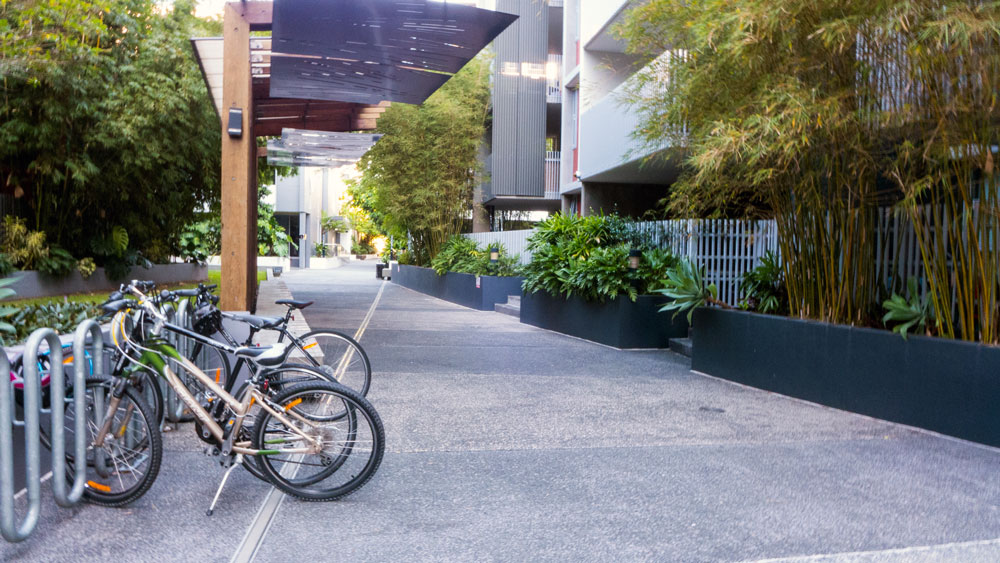 The South Bank Parklands continue to be one of the success stories for Brisbane. Developed by the State Government following the 1988 Expo it remains an attraction for locals, for travelers (such as myself) and for tourists for a host of reasons.

From here you can have views back across the river to the city centre and you appreciate the huge mistake made by placing the major roads on the city’s riverbank.

The parklands themselves run along the river bank but they are also largely separately from the water’s edge by a major pathway.

One new exception has been the introduction last year of a pocket park that actually allows you to be by the water.

I intend to review this latest small park as it is a curious little addition to the major facility. 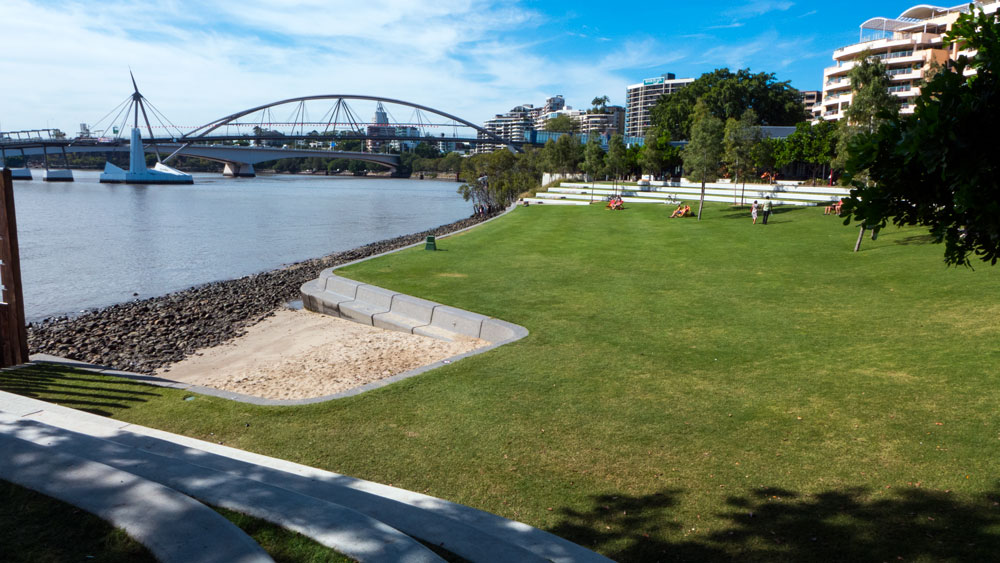 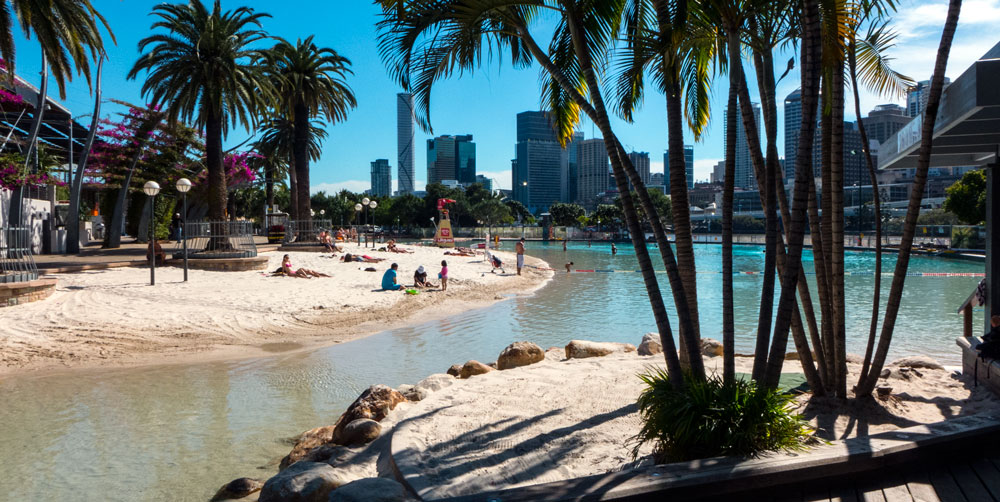 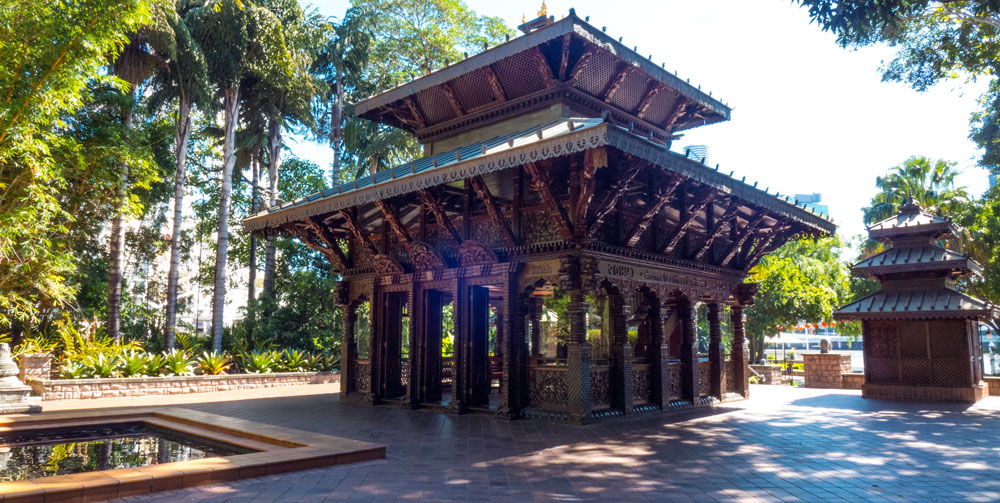 The Queensland State Gallery’s two exhibition buildings are sited along South Bank. These are great art galleries that are always worth the visit no matter what is on.

I hope soon to write more about these art galleries as they deserve to be praised. 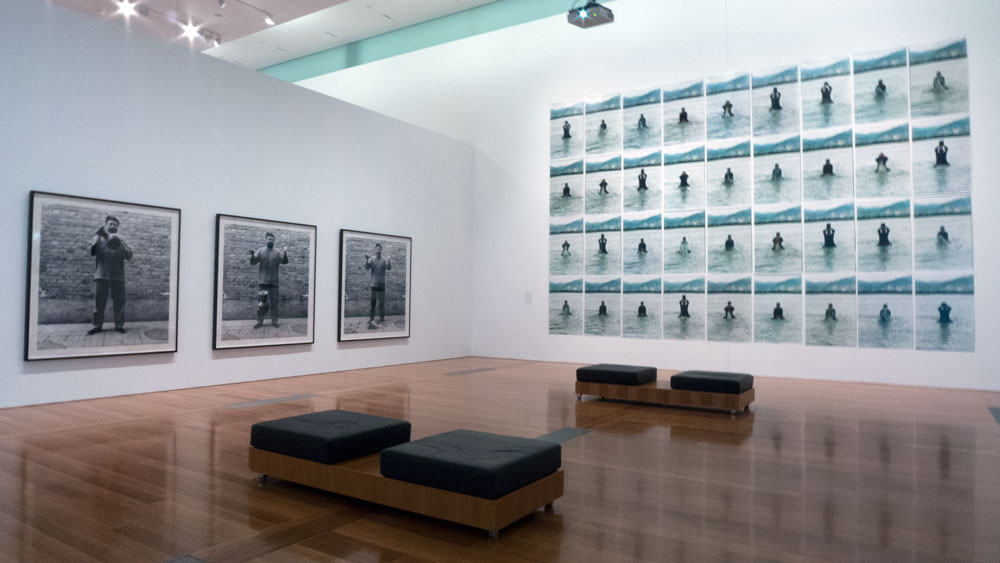 The main street along South Bank is Grey Street. Yep this street is called Grey Street. Most of the street is grey, either grey buildings or grey roadway and footpaths.

The plantings along the street are generous and carry the place. Again the architecture that fronts the street is not much to rave about. The architects have again delivered no design to talk about. Over the hill from South Bank is the far more interesting residential area known as West End. As alluded earlier, the developer-architectural forces are at work to introduce far more apartments in the current international boring styles. This is very much a case of a destructive work in progress. Below are a set of images to provide a taste of the area. The local police station is even in an old house – for now – as I suspect it about to be moved. 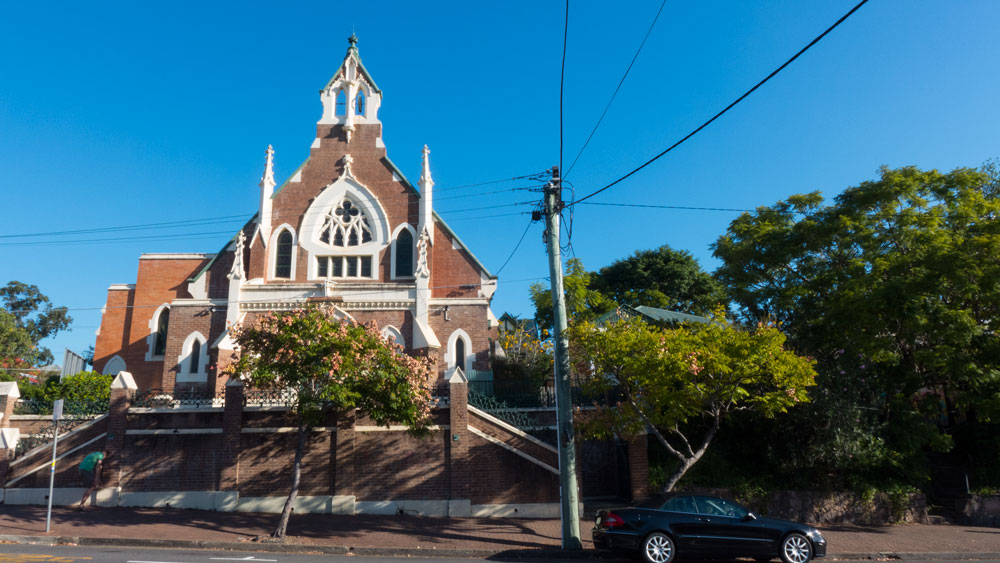 The Greek community facilities above, and I suspect much of the land around it, is about to be redeveloped to deliver a huge apartment block. I suspect it will be white and grey. To summaries the above, away from the city centre there are indeed some interesting aspects to Brisbane. The areas around South Bank and West End are complex places being a mixture of the parklands, lots of places to eat, shops, cultural facilities, the river, and the inner suburbs with new and old residential areas.

The next and last piece this series, will be a summary and some overall comments in response to Alain de Botton’s comments on Brisbane.

PS: Best place for breakfast and with good coffee – head for the corning of Browning and Russell, where just off the corner down the hill is a cafe called Wrapture. It is a local and is busy on the weekends. The service is friendly, food good and coffee just right. (I stole these two images from the web)