Braddon Development on the Cusp 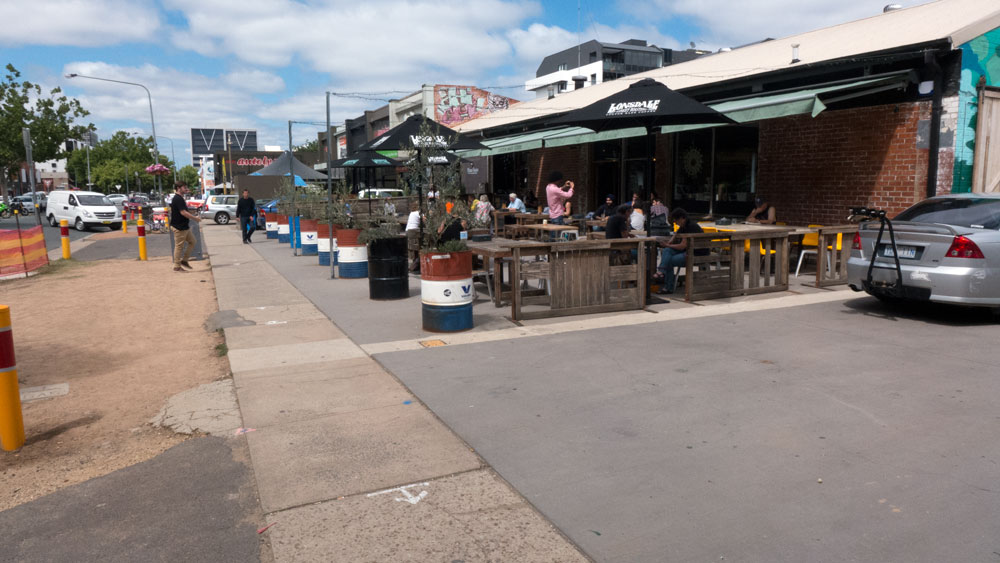 Here are some thoughts on the redevelopment underway within the Braddon Precinct, being mainly two streets, Mort and Lonsdale Streets.

There’s a 2008 ACT Planning Report for Braddon in which the key priorities are:

The report states that this commercial centre should encourage building forms to ensure a cohesive and distinctive character.

The focus for this article is on the former light commercial centre that is being transformed into a mixed used apartment, business and entertainment/café precinct. According to local mythology, this is one of the hippest places to be and the most exciting urban design developments in Canberra.

All of the above could be true one day, but it ain’t yet. 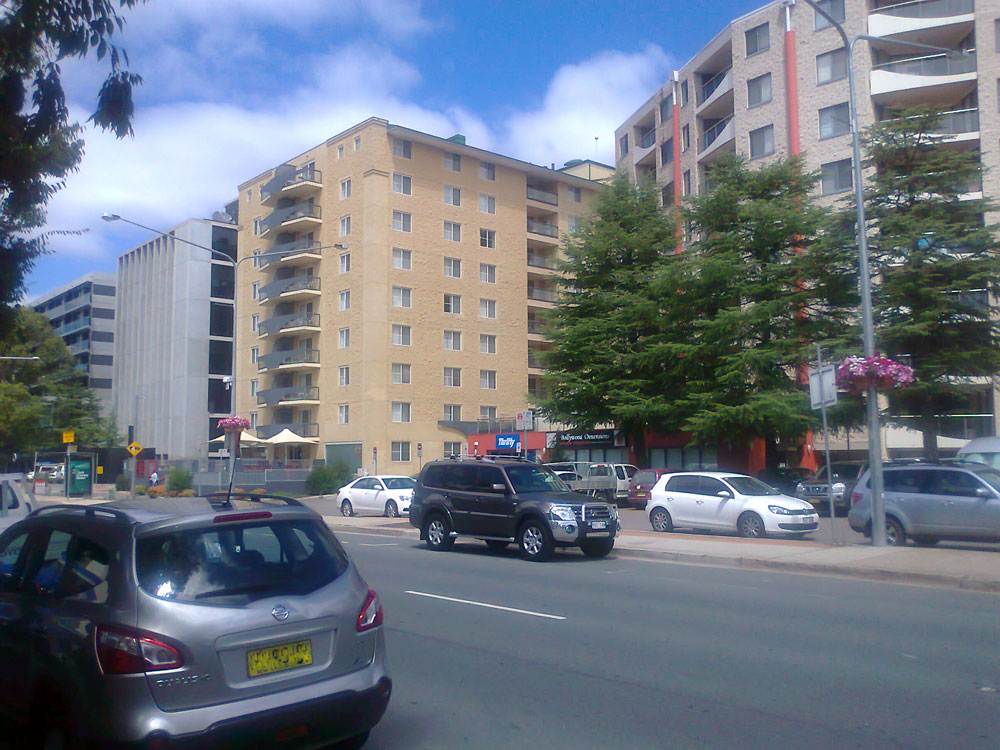 The rhetoric about the precinct is much greater than the reality. Braddon is in danger of being dominated by mixture of medium and high-rise bland-box buildings.

The streetscapes are a mess except for the previous large trees that beautifully dominate some sections. As the traffic and residential use has intensified, the previous parking difficulties have now become worse. It is common for vehicles to park anywhere, including on the footpaths.

The top of Lonsdale Street became a buzz with the setting up of the creative pop-up shops. Having attracted more people into the area and increased the value of the land sales, these outlets have now been moved to make way for more apartments.

The cafes in the area are booming and new ones arrive almost ever week. There are so many attractive elements coming together that this precinct could indeed be a sought-after place to live and to visit. The warning is that many precincts throughout Australia have developed similar café/ restaurant style atmospheres only to have them trashed with the arrival of late night bars and rowdy revellers. This has happened in nearby Dickson. 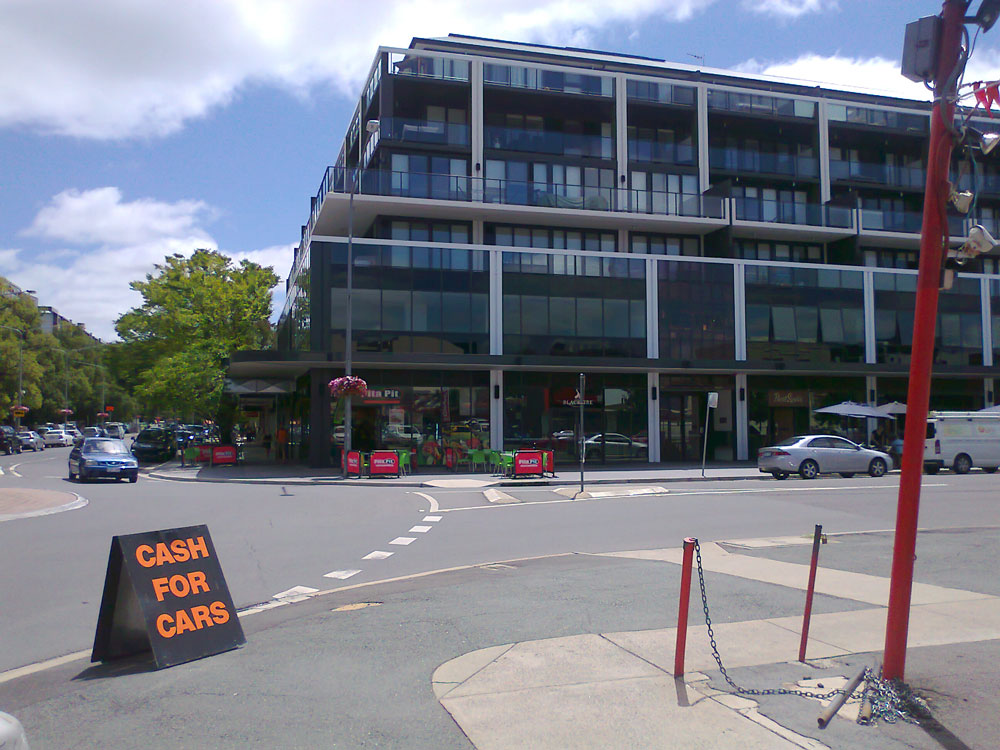 Two images – above: The new apartments in contemporary bland box steel and glass. And below the former car sales building (care of google) which looks far more interesting (click on for enlargement).

I suspect that Braddon is being managed well as a new precinct but I fear it is not being guided by an overall vision. Such guidance would ensure that the streets do not end up being corridors of the bland-box metal and glass walls. The new buildings should be exemplary in their use of sustainability measures.

The area’s open spaces and pavements need to be rethought. Many are very degraded and dangerous. The government needs to be prepare for insurance claims given how easily it is to trip up, to be obstructed by parked cars on the footpath or to be bumped into by cyclists dashing along the footpath to avoid the heavy traffic in the crammed streets.

Curbside parking should be largely removed and then most of the sidewalks widened for pedestrian use with minimal obstructions. More trees should be then planted. Clutter and excessive number of café tables need to be banned from the sidewalks. A colleague has suggested the introduction of several pedestrian laneways to join Lonsdale Street to Mort Street to encourage people to meander and shop on both streets. All this and redesigned streetscapes would make the precinct a place to promenade, to meet, to socialize and to spend time (and money). 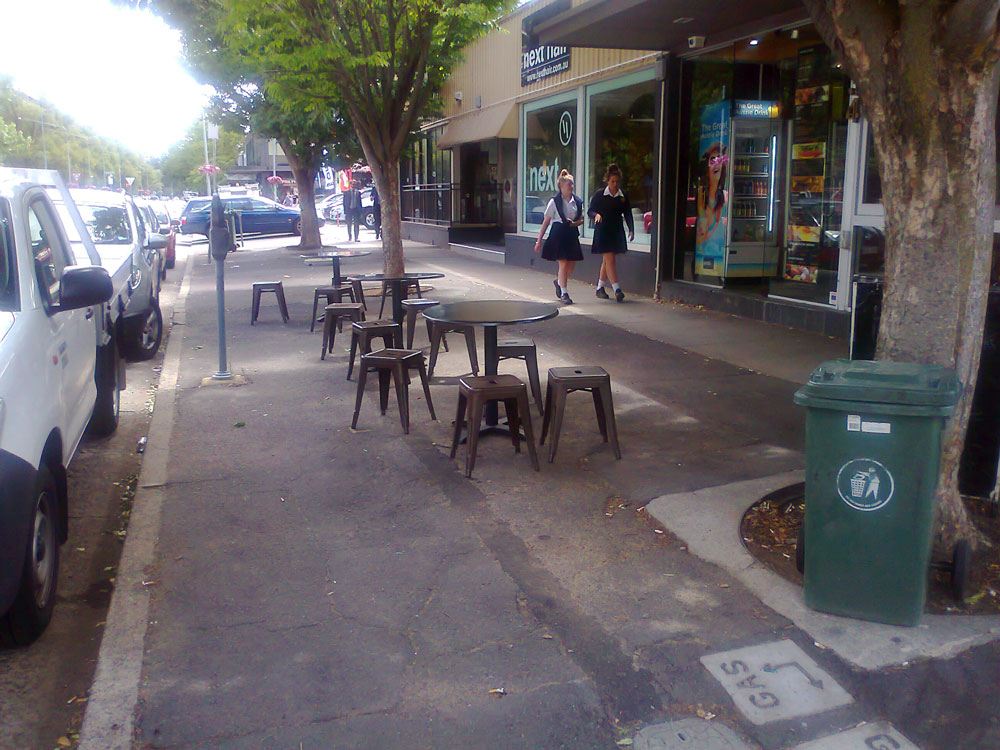 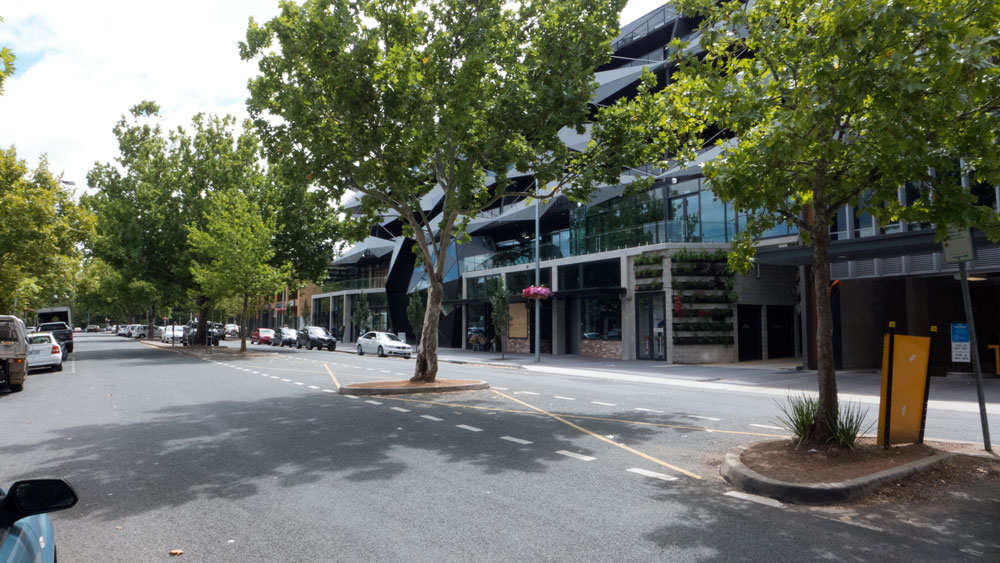 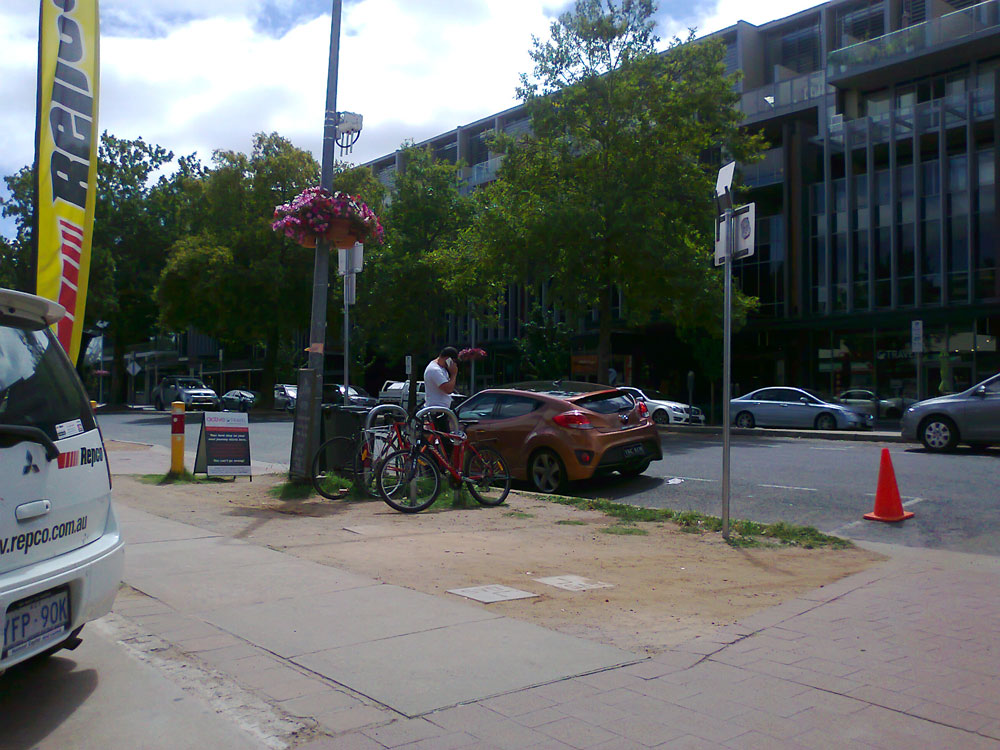 Canberra does not need to hear from any more expensive international fly-in fly-out specialists. Such costly consultancy monies could be spent by the ACT agencies in engaging with local residents, shop owners and designers to bring together the huge amount of creativity and intelligence available already in Canberra.

I remain optimistic that the Braddon precinct could be a wonderful place one day. There are some positive signs of this. But very bland buildings are appearing. We are on the cusp of success—or—on the cusp of delivering an unsustainable collection of open spaces and buildings that will increase, rather than mitigate, the effects of climate change. That will not be a fun place to live and visit.

So far the original 2008 aspirations by the ACT Government remain unfulfilled. Braddon, as with so much of Canberra, desperately needs political vision and leadership.

Do we have amongst our local and federally elected politicians, leaders who can be trusted to deliver a sustainable, creative and attractive Braddon precinct? 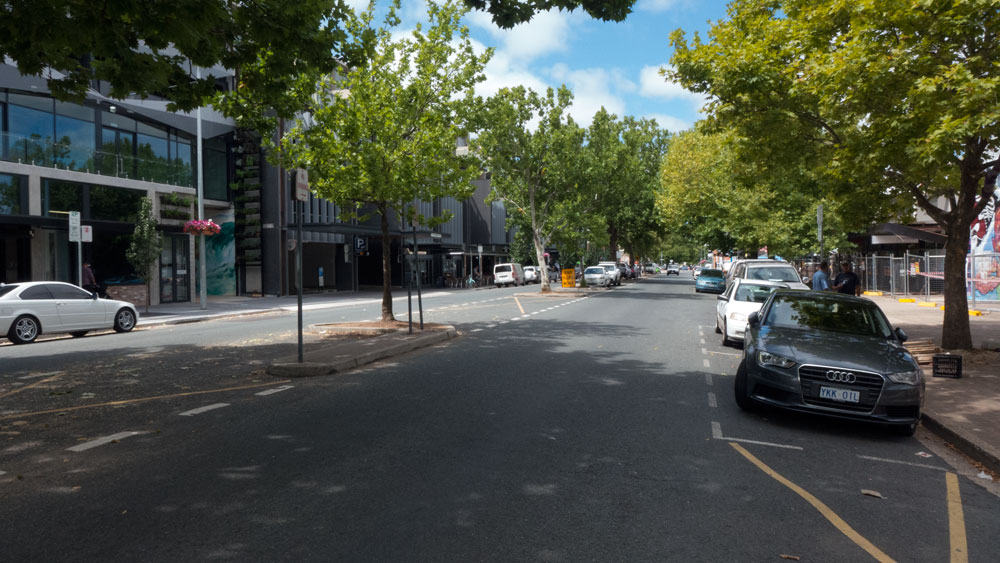 And there have been some unfortunate commercial casualties. The former most popular bakeries/cafes in Braddon could not compete and has had to close. It was on Mort Street but the new activities have been centred on Lonsdale. There has also been increases in parking costs (so you do not meet there for the occasional coffee any more) and there has been very strong competition on Lonsdale Street with the arrival of several new Bakery/Cafes.

Two images – before (thanks to google)and below – the scene in the cafe with all things just left behind as the owners vacated. 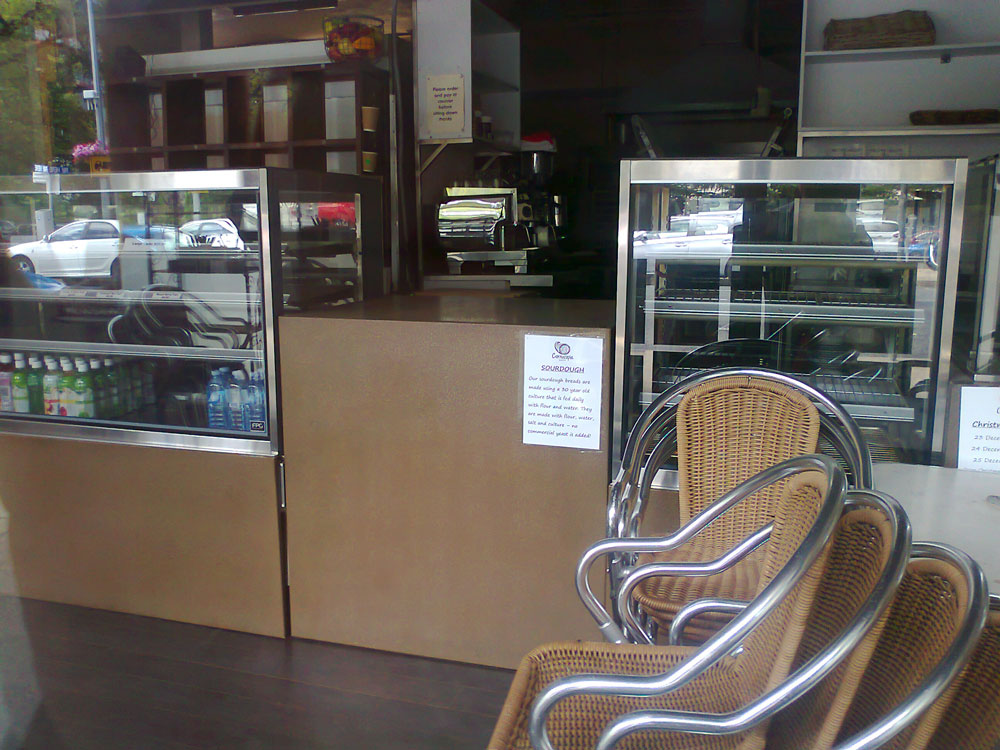 and a scene from further up Mort Street where objects from the night’s activities are left behind for someone else to clean up. (click to enlarge) 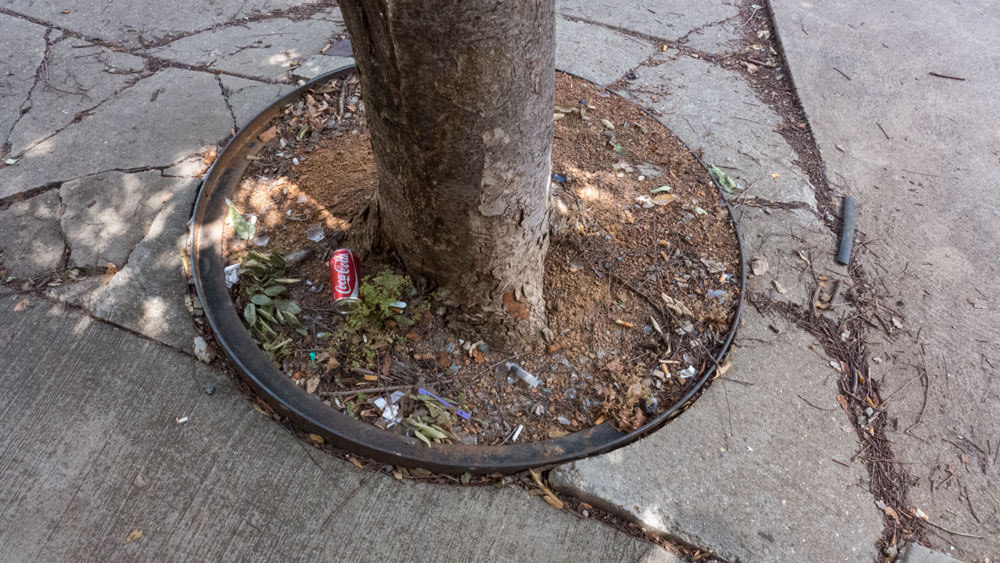 A slightly shorter version of this article was also posted to RiotACT – click here.