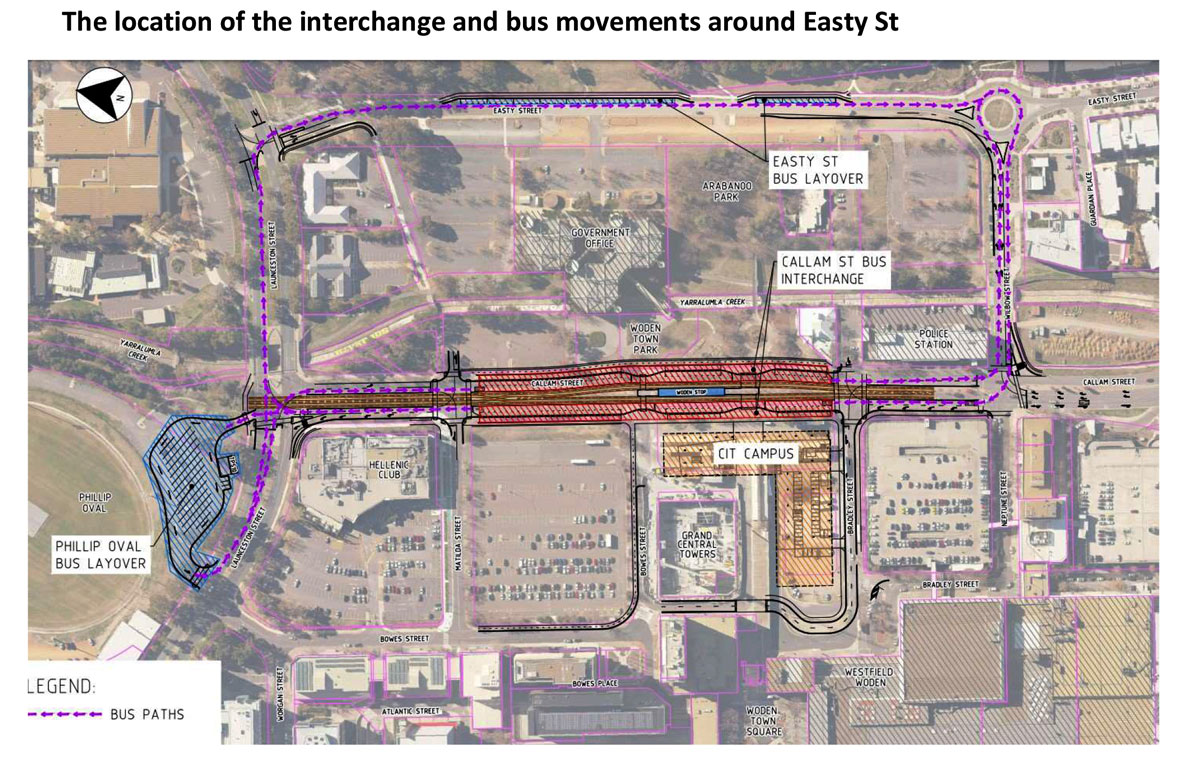 On May 12, I finished a column on the shocking state of Woden developments with this statement: “This government’s expertise in town cramming is worthy of an award.

“It has been a remarkable achievement to jam so many towers into the Woden Town Centre and now they are setting out to push the bus interchange on to the street – replacing a very good one that stands on land now required for something else. ACT government planning strikes again at Woden. Can it get any worse? Don’t answer that!”

The government has answered. On top of everything that is wrong with what they are doing to Woden, the latest planning disaster will make life bad for residents living in the quieter apartments alongside the Easty/Wilbow roundabout near the Woden Centre.

This residential area won’t be so quiet in the future thanks to the complete mess being made of the new Woden bus interchange by Transport and City Services Minister Chris Steel and his blinkered bureaucrats.

What has been happening to Woden must be classed as the worst example of how to completely stuff up a city town centre. To understand what is happening requires allocation of days of making your way through mountains of complicated and inaccessible documentation that pretends to be something about planning.

Many have written about the horror that is being played out with the ad hoc developments that have landed tower apartments crammed together within the Woden town centre. This looks bad today. Yet there are many more of the same to come. This is town cramming on steroids.

When the ACT Greens go on about climate change they simply ignore what is happening in Woden with the ever-shrinking green spaces, the lack of solar and very little opportunity for residents to retro-fit when the climate gets even worse.

On top of this has come a political decision to plonk a new CIT campus where the bus interchange sits. Locals loved the idea of the new campus but had suggestions of more appropriate locations. But when is the last time locally elected politicians listened to them? This meant a new bus interchange had to go somewhere and what could be cheaper than taking over some of the town centre’s main street for a linear exchange. Callum Street will be closed off to allow for the buses and later for the tram station (whenever that is).

As the Woden Valley Community Council has clearly pointed out, the new interchange is a design mess. In April, Minister Steel and senior project staff knocked back the invite to discuss this project at a community council meeting. There are so many things wrong with this interchange including the fact that the former fairly quiet residential streets are about to become noisy bus loops and lay-overs.

Local member Chris Steel and his bureaucratic advisers have failed to convince anyone that the large number of buses and the diverted traffic will not be a disturbance.

They have justified to themselves that losses to local amenity can be easily justified under their flexible planning regulations. The regular passing of buses is noisy on any street, but will be extra disruptive around the Easty/Wilbow roundabout given the nearby apartment blocks – let’s not pretend otherwise. Anyone for a good night’s sleep?

When the city gets electric buses things may quieten down. Great – but wait! Electric buses to Woden would be a lot cheaper and a popular transport solution for the Woden to Civic run. With electric buses, and no tram, a better designed bus interchange would be possible. Time to plan for the future! Who needs that super expensive tram and the towers alongside the tram going south?

Chris Steel and his lot are compounding the former laissez-faire planning atrocities by applying this inappropriate solution to a stupid problem of their own making. Politicians of all colours are staying away from getting involved.

This town cramming on steroids, along with the interchange that will destroy the residential streets, has to be stopped. It is definitely time for independents with an interest in planning and urban matters to be elected for this southern electorate.