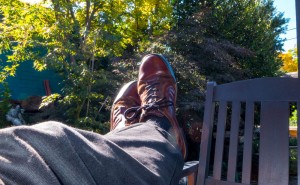 It was earlier today while sitting back on my verandah reading a book on the concept of architecture and enjoyment that this Dickson resident had the pleasant autumnal experience of drifting away into a city of complete amazements. The city’s government had just appointed a Chief Minister of extraordinary vision for urban development.

The first thing that this new Chief Minister (known as ‘The Chief’ inside the corridors of power) did was to announce just how unsettled he was by the recent developments being proposed by his planning bureaucrats for the city’s inner suburbs. The Chief had consequently made it a priority to spend as much time as possible talking to local residents to hear their aspirations on how to deal with so many complex changes to the city’s inner city neighbourhoods. The Chief stated that he was very impressed by the intelligent and creative ideas that residents had shared with him. He wondered why these concepts had not been incorporated into the planning documents put forward to his government by the city’s planning authorities.

As a result of these very open and friendly conversations, the Chief Minister had realised that so many of the development proposals being put forward by his bureaucrats were indeed very inappropriate. He had come to the conclusion that the bureaucratic culture within his own planning agency was completely out of touch with the realities of peoples’ lives and their visions. In fact it was while talking to residents that he had heard that they were clearly not opposed to changes and to urban developments. This contrasted enormously to the consistent message that he had received from planning officers as well as from the ever-present property lobbyists who haunt his corridors.

The Chief was proud that his government had an abundance of policies across areas such as climate change, sustainable settlements and urban health and well-being. However he had to temper this positive note with the reality that his government’s own planning and development agencies had taken very little, if any, notice of these urban and environmental policies.

He had also realised that most of the concepts for urban development in his city were generated for monitory reasons and that unfortunately they took very little account of the welfare of the residents. The residents that the Chief had spoken to were very aware that sustainability, maintaining the ambience of neighbourhoods and the implementation of climate change adaptation measures could be undertaken in such a manner to include financial and budgetary responsibility. It was not that hard!

The Chief announced that changes were to immediately take place in how planning and development was to be carried out across this city. A select committee of the legislative assembly was being established to conduct hearings to allow residents and developers to air their aspirations on how planning and development could be undertaken in a much more sane and people friendly manner. This review would examine the host of issues that have been ignored for too long relating to current planning processes, the building standards, environmental issues, climate adaptation, the use of zones and rules and other implementation matters such as the use of private certifiers.

The Chief proudly stated that his aim was to urgently develop a new style of planning and development regime, and not necessarily another ‘authority’ like the former, that must be people and environmentally focused as a first priority while still addressing the need to be financially responsive to budgetary requirements.

The Chief is insisting that this new planning body will be structured to be linked directly to the policies of the elected government, to have attached to it new processes for real community engagement and to have an executive answerable directly to an urban development select committee of the government.

Alas! Suddenly this Dickson resident was brought back to earth by the yapping of a neighbour’s small canine. This shock back into reality demolished any dream of what the city’s future could be when visionaries are elected and employed to run the place.

Surely our elected politicians are visionaries who are mindful of the aspirations of residents? Surely they would see to it that planning and development was relevant to the 21st Century? Surely climate change adaptation was a priority for all urban developments in this city?

Obviously the 1st of April is the wrong day to have aspirations for having a Chief Minister with people focused visions for sustainable urban development across Canberra?

But all might not be lost—maybe the present Chief could do something about that yapping dog next door. Now there’s a real challenge for April Fools Day!

1 thought on “A real Chief Minister”