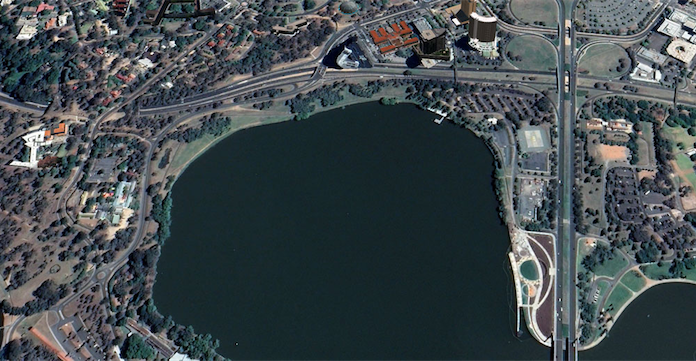 Here’s a tale of the use of alternative facts by both the government and a couple of its supporters.

First there’s couple of letters from local media written in response to opinion pieces about the future of West Basin – the foreshore of Lake Burley Griffin the west of Commonwealth Avenue on the north side of the lake..

COLUMNIST Paul Costigan has a go at author Tom Greenwell for daring to suggest that Walter Burley Griffin’s plans supported the idea of some development at West Basin. Had he troubled to look at Griffin’s plan accompanying his article, he would have seen development sites both sides of Commonwealth Avenue down towards the lakeshore, a road system including a circular curved lakeshore “boulevard” and buildings extending around to Acton Peninsula.

His suggestion that the West Basin foreshore is “natural” with “soft edges” is also wide of the truth. In fact, most of the northern foreshore to East, Central and West Basins is hard edged, with masonry retaining walls.  Griffin’s plans show curvilinear formed lake edges with adjacent boulevards around the three basins.

I respect the efforts of voluntary community organisations, particularly where they are fighting to keep the high-quality amenity that characterises much of the environment of the central area of Canberra.  I don’t think the Lake Burley Griffin Guardians have necessarily got it right, however, in their strident opposition to the west basin (City to the Lake) development. The guardians seem to have the view that all aspects of the lake should be retained “as is”, regardless of the intentions of Walter Burley Griffin or anyone else. Griffin’s plans did show the civic centre extending down towards the lake with a hard-edged, curved shoreline to the northern side of the west basin.

The guardians apparently preferred the area as it was prior to the development of the new Henry Rolland Park, then dominated by open carparks, senescent trees and poor-quality pathways, as it still is north-west of the new park.  The guardians also prefer soft edges to the lake shores.  There are kilometres of natural shorelines to the east and west ends of the lake, but the central basin and adjacent parts of the east and west basins are predominantly hard-edged, with retaining walls.

This is appropriate for areas of more intensive usage. It allows for greater public access to the lake edge and facilitates high standard maintenance.  As I enjoy cycling around the east and central basins (and Henry Rolland Park) I reflect on what a beautiful, high quality, well maintained and popular environment it is.  This did not happen by accident. It was the result of continuous improvement.

I think you get the point, for whatever reason this former employee of the ACT Government needs to provide justification for the changes to the lakeside areas of the lake planned by the ACT Government – with the blessing of the National Capital Authority.

First to correct something. In my opinion piece for City News the banner image I supplied was not used and an image of one of  part of the plans by Burley Griffin was used. The photo I supplied is at the top of this post.

I actually avoid using these plans as Burley Griffin changed them several times and in most cases (as in this one), that’s not the point. I am not one to say that we have to deliver development in line with what Burley Griffin outlined (whatever version). So much of his concepts were compromised by later bureaucracies including in the 1950s by the NCDC (National Capital Development Commission).

My point was that the writer Tom Greenwell had disingenuously used Griffin’s concept for the central city to be placed between the bridges to justify the placement of a new apartment suburb on West Basin in the 21st century.

As for the hard edges that Richard Johnston is promoting as normal – the lake was designed to have predominately soft edges as part of the need to filter so much storm water that enters the lake. The amount of soft edges should be not diminished. Instead they should be enhanced to increase biodiversity – remember climate change.

A decade or so ago a plan to reintroduce more soft edges to the central areas won a national competition. It included reintroducing more wetlands.  The central areas do not need all those hard edges. Paths can be safely designed back from the edges.

As you would expect, that plan to change those hard edges – disappeared. That’s the way of the NCA in the 21st century.

Another great myth put out there by the City Renewal Authority, the ACT Government, The ACT Greens, ACT Labor, the NCA and all their supporters, is that West Basin is mostly car park. Have a look at the photo at the top again – and you can see that there are carparks in the top left corner – with hoards of trees – but that as the foreshore heads west it is predominantly open spaces – with soft edges. 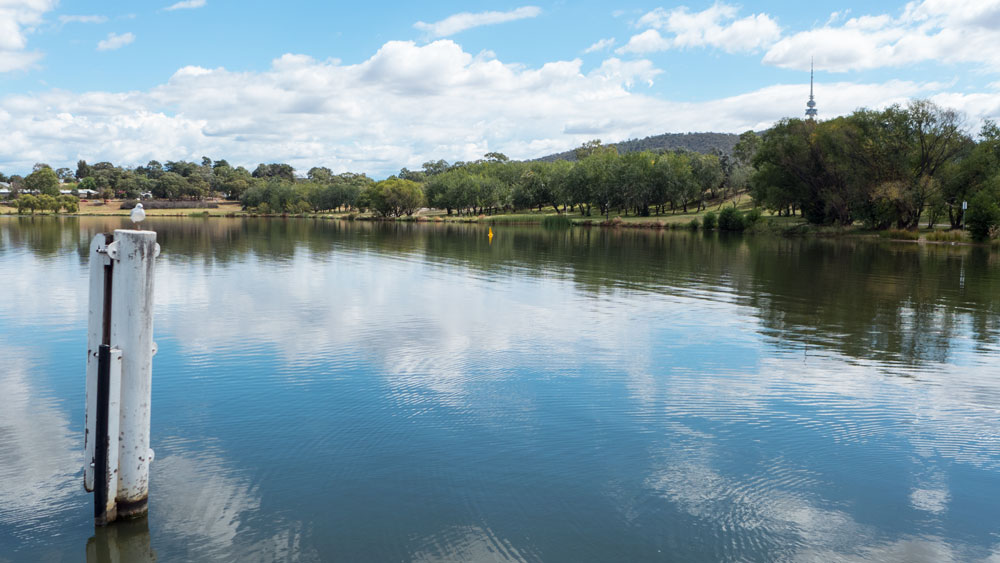 And above is a photograph taken from the former boat jetty. That’s all parklands stretching away to the west that all those bureaucrats deny exists in the quest for alternative facts that justify the destruction of this foreshore.

Richard Johnstone has misrepresented the Guardians in their quest to keep this open space. They do not want to keep it as it is. They have stated time and time again that it needs to be upgraded with community friendly facilities and needs to be maintained much more than at present. It should not be sold to developers. It should not become an apartment suburb with a token amount of open space.

As for the argument that the ACT Government should be allowed, courtesy of the NCA, to buy some of the lake and fill it in to create more space for hard surfaced open spaces – is truely ridiculous. Leave the West Basin as an open space and improve it for future use by visitors and residents.

As for the ACT Greens constantly saying that doing away with those car parks is a good thing; well let’s see them first give up their government car spaces in Civic that are allocated to them as politicians.

Surface car spaces are not a good thing. But to use that argument (do away with car spaces) so that the land can be sold and apartment towers built is more of the stupid alternative facts that have come to be the norm for people supporting the over-development of West Basin.

West Basin is a great space waiting to be improved. It should not become an apartment suburb.

And for more on the arguments against what Tom Greenwell has written – click here for a very well informed  piece by Penny Moyes, one of the Lake Burley Griffin Guardians.