Across Australia there are stand out examples of campus design amongst many of our universities. In more recent years I have had reason to visit campuses in all the states and back here in Canberra and have been constantly impressed with some of the architectural and landscape work.  In most cases I have been positively impressed with the work and in others I have been taken aback.

On a recent journey into the ANU (Australian National University) I noticed some new buildings and so went back the following weekend to investigate. It so happened that there was almost nobody around, which was a bit of a mystery given it was mid May. It was a cold day with a hint of some rain.

This group of buildings were amazing. I think the group is called the science campus. Such a set of architecture opportunities would be a nice break for the architects from having to satisfy the normal commercial corporate clients who it seems simply want yet another glass tower with some form of superficial decoration.

The question for me is not so much about whether the architecture is wonderful and exciting, it is more than that. I would consider that given the enormous climate change adaptation requirements for this century, that university faculties would be switched on enough to insist that all new buildings and landscape work addresses these issues. These building will be here at least for several decades so you would hope that the university would be forward-looking. Having walked around these buildings I have to say that there was little evidence of this thinking.

The space around these buildings was definitely not a landscape example of how to be mindful of increasing the biodiversity and adding to the green infrastructure. It was about concrete. But alas, there was one small attempt at a superficial green wall (see blow)

The courtyard below looks like a fairly pleasant place to sit, except that it was dominated by the roar of air conditioners from both buildings. However, once those plantings mature, it may be a more welcoming place.

The landscape works were too new to be assessed but it was already obvious that the landscape works were more about softening up the new architectural forms. This is always a difficult task given that the architects usually consume most of the resources on the buildings and leave too little for seriously dealing with enhancing the green infrastructure. 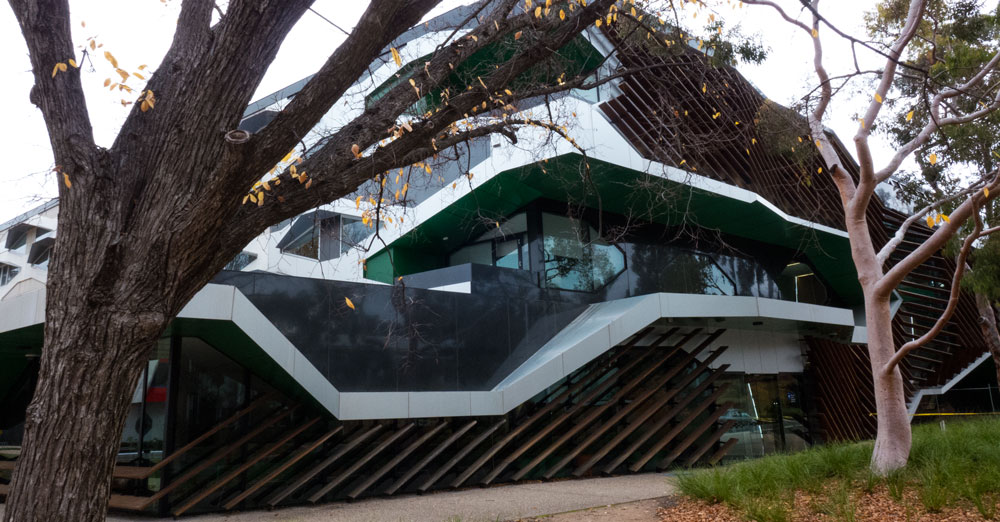 What was not obvious was whether any of this first group of new buildings had any form of environmentally friendly elements built into them. There was no sign of any water catchments, no solar and no real embrace of using green infrastructure. This part of the campus contains contemporary architecture designed to dominate with little acknowledgement of the need to put in climate change adaptation measures. Even on this quiet Sunday, they are all had air conditioner systems working at full throttle.

However down one end of this section of the campus there is a building that actually may have been designed to address the 21st century environmental concerns. The new Fenner Building did have some water catchment in place and according to my subsequent research revealed that it had been built to be both energy and water efficient. It received a six star green rating. I take this rating not very seriously.  I must declare that the Green Building Council’s green star rating system is very superficial when it comes to the total environmental issues. The genral consensus is that the rating system is designed by the development lobby for the development lobby.

I suggest that the Fenner building is an example of someone actually doing something about climate change adaptation with their new building. This makes them the stand-out exception to the many new architectural wonders nearby that seemed to have largely ignored climate change and the environment in their building design.

The architects would argue that they deliver what the client wanted. I will say more on the role of architects in not doing the right thing by climate change in a later posting. 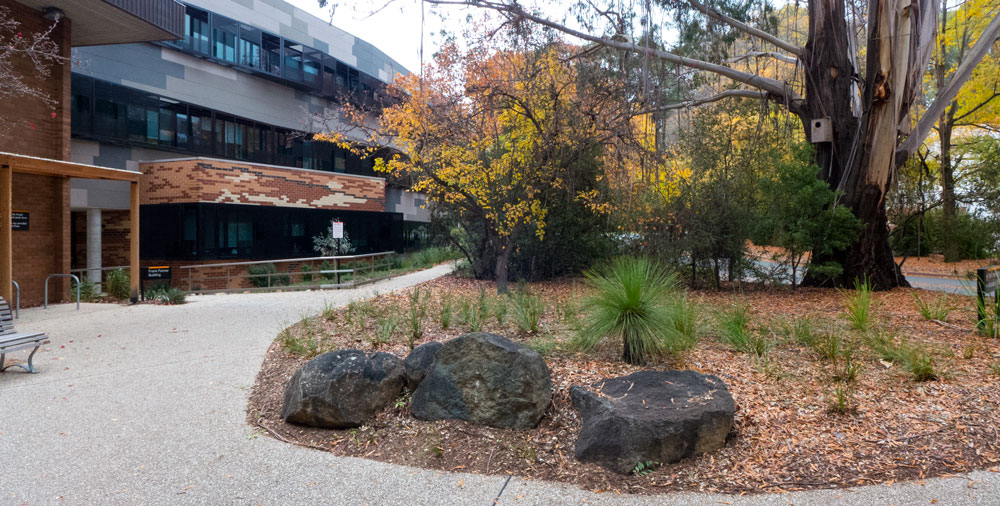 Above is the front of the new Fenner Building. The new landscape works were too new and are yet to mature. But it evident that there may have been a landscape plan in place to link this building through to the others in the science campus. This is a good thing if it is true.

Above is a view of inside a courtyard with some large carts to link to the history on logging.

Someone at the ANU has an obsession with concrete  balls. They are everywhere. In this case I could not work out why there were placed here. Were they expecting a tank to make its way across the garden?

Around the south side of the Fenner Building is some new landscape work. This looks to be a water swales and special gardens. Given that it has not rained much of late, it was very dry. This site will need to be revisited after some significant rainfalls to see how it functions.

As I looked at this very new landscape work I considered that someone has done a good job.  I doubted whether the architects would have done this. And yes, I was right. When I returned home, I made a quick Google and there they were – Harris Hobbs Landscapes – one of Canberra’s outstanding landscape architecture consultants. click here for more.

While I was walking away from the Fenner Buildings (it looked like rain was about to happen), I noticed several other landscape works. These I may revisit to see what is going on. On this Sunday it was cold and given that it beginning to drizzle, we had to leave and head for a nearby cafe for coffee.

However we did cross over what looked like a new Lindsay Prior Walk whereby trees were labelled and artwork introduced as if the walk was a mini arboretum experience to honour Lindsay Prior. I intend to revisit this site when there are students and people around to see how it functions. 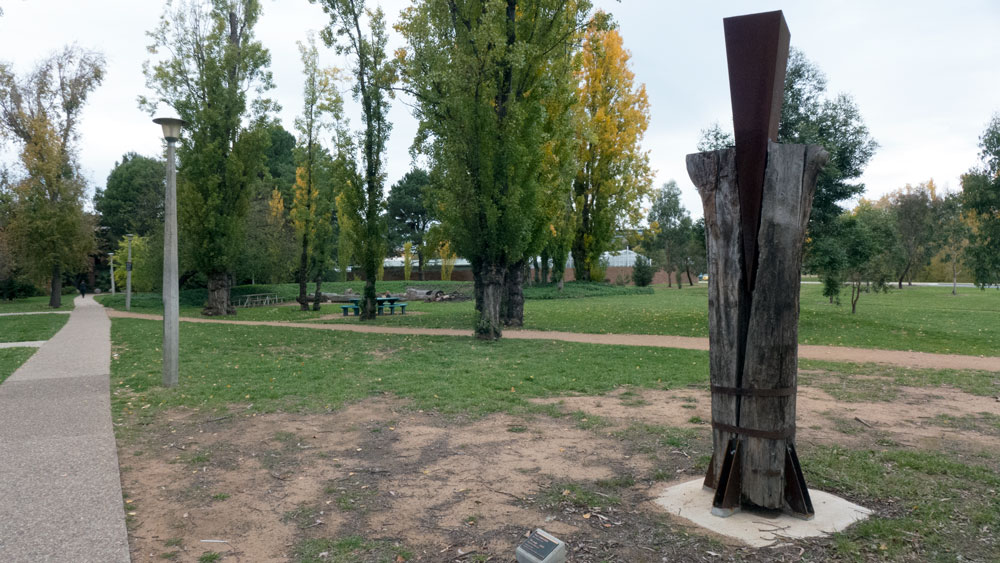 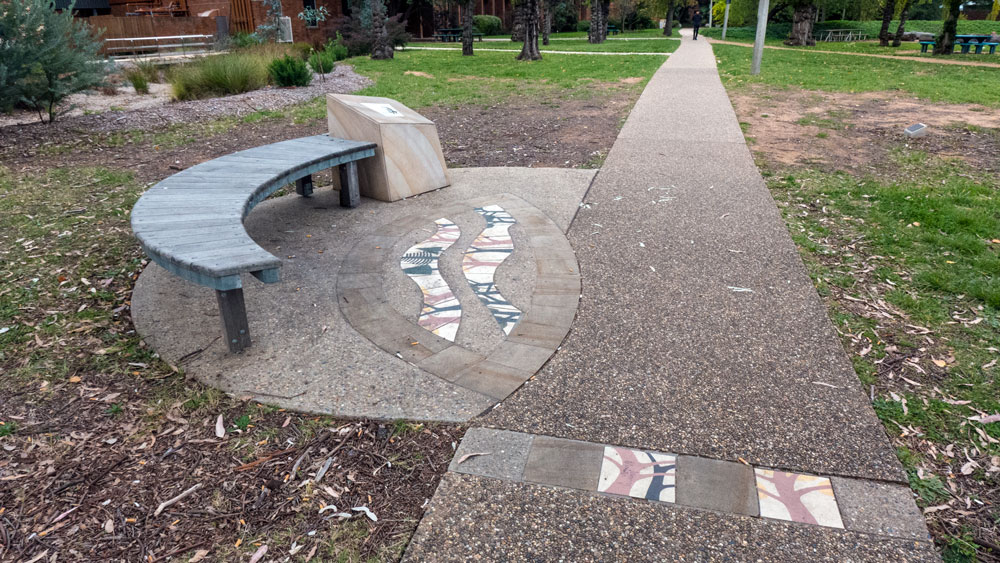 The artwork (below) in the main science courtyard is by Wolfgang Buttriss. As I said above, I intend to revisit this campus during the a working week to see how it all functions.

As stated above, except for the Fenner Building, it seems that most of these new buildings have done little to address climate change adaptation issues. The Fenner Building and its landscape works are the exception. A look at Google maps reveals that most have a huge amount of air conditioning on their roof-tops. Again, the Fenner Building is the only one with any solar. So the conclusion here is that the ANU mindset is yet to be re-focused on addressing climate change, especially in its provision of new buildings.

On a positive note, the grounds of this university are a real pleasure to walk around any day and in any season. The grounds are mostly well looked after and there has been a good lot of landscape design work delivered in many sections. It is very highly recommended as a place to go for a stroll with a friend or two – and during the week there are several good locations within the campus for a coffee and something to eat.

The intention is to write more reviews of other sections of the ANU sometime soon.