Question? Can a professional in a large bureaucracy bring about change? 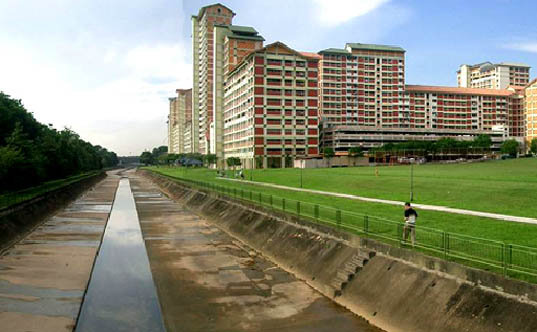 The above image is of Bishan Park in Singapore until a senior landscape architect within the Parks Board had a great idea. Why not change this unattractive engineered solution back to being part of the river? Apparently he pushed hard for the idea to be taken up and eventually won the day. We visited this park in 2012 and were impressed by the difference a great idea and determination can deliver to the local population.

This park with its restored waterway has won awards – click here

Here’s the National Park Board pages on the park. It shows people enjoying  the park whereas when visited, there was almost no-one there.  That would be because we visited the park mid-week around mid day when sensible people stay out of the heat. This park would be very popular in the evenings when it is cooler; although cooler in Singapore does means in the high twenties (degrees centigrade).

First a warning. If you plan on visiting this park, it is quite a walk from the nearest MTR near the Newton food centre – which is also worth a visit.

It is not the walk, it is heat along the roads to the park that may get to you before you make it to the Park. When you get there is a small oasis of shelter at the end of the park awaiting you. So plan to take a rest first on arrival.

Below is a map from the Parks Board site. 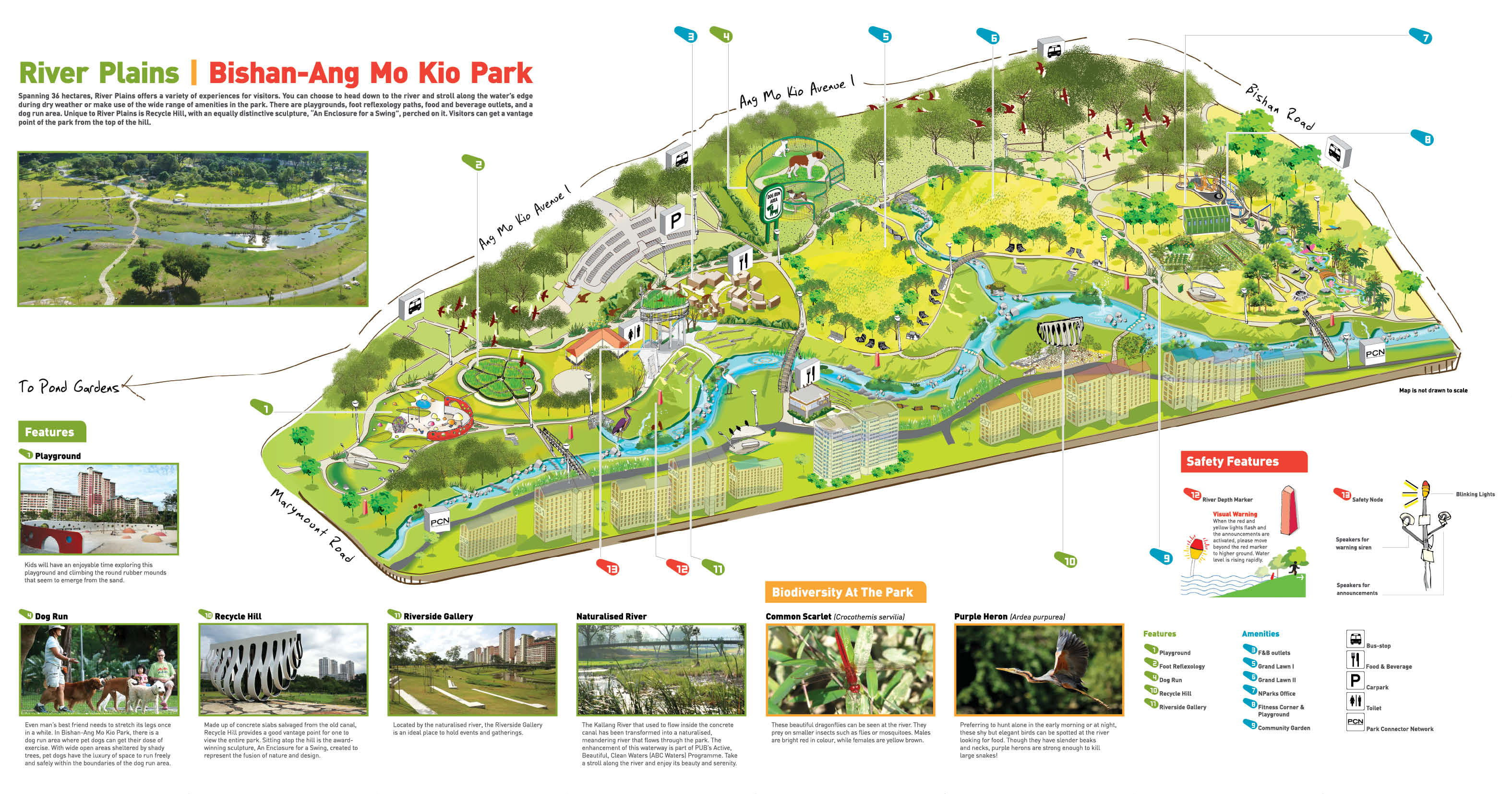 This photo shows the old drain connecting to the regenerated section. 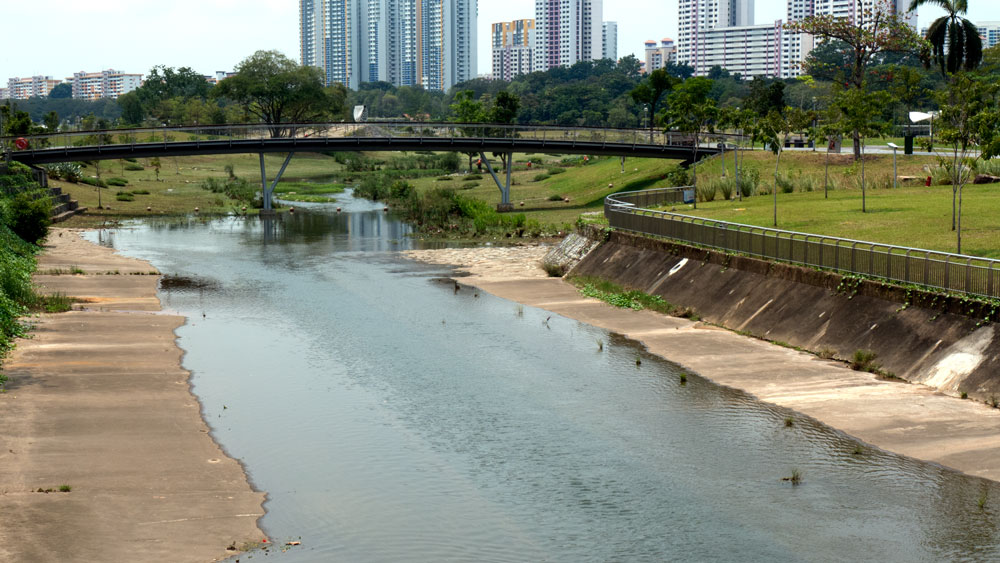 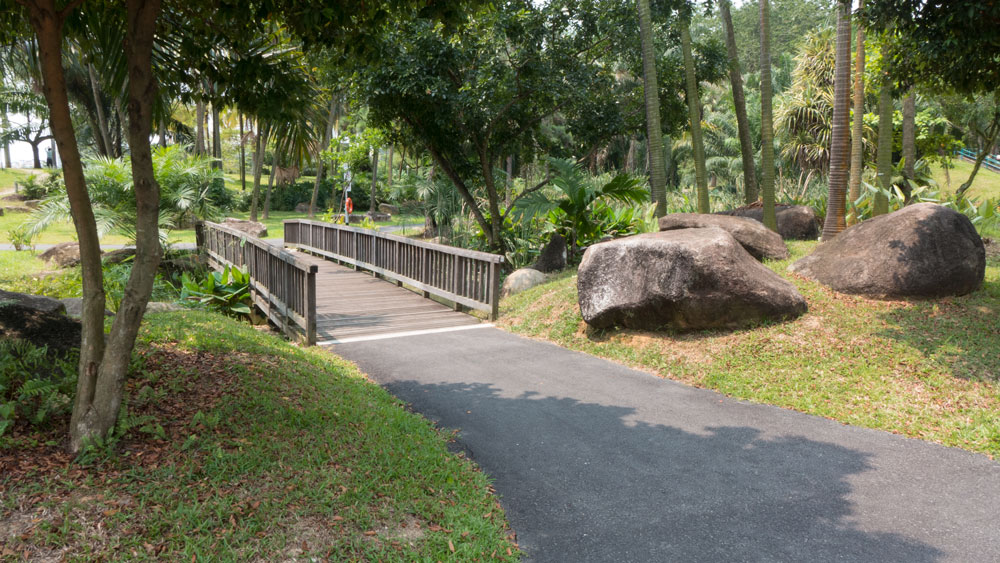 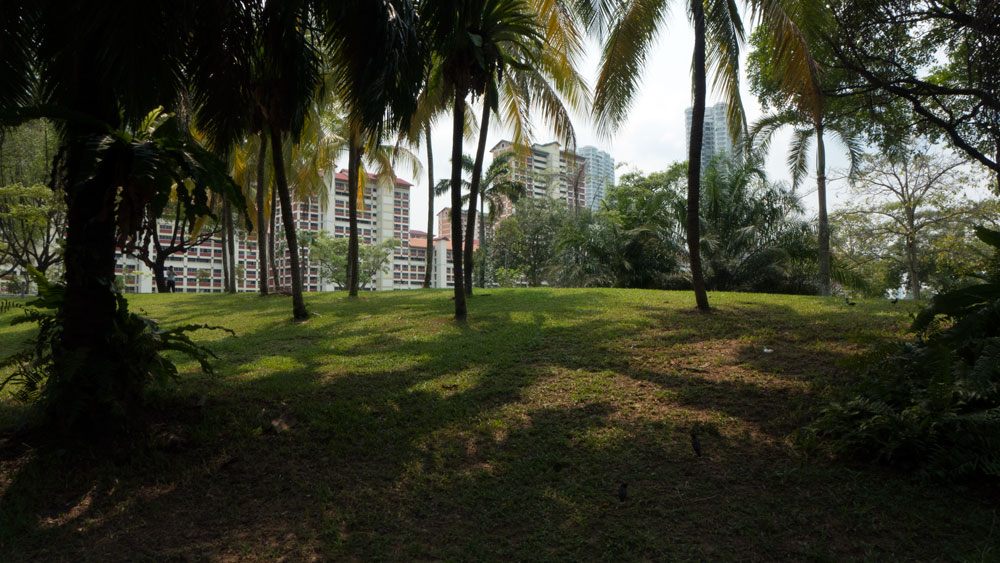 Nearby there is a community garden 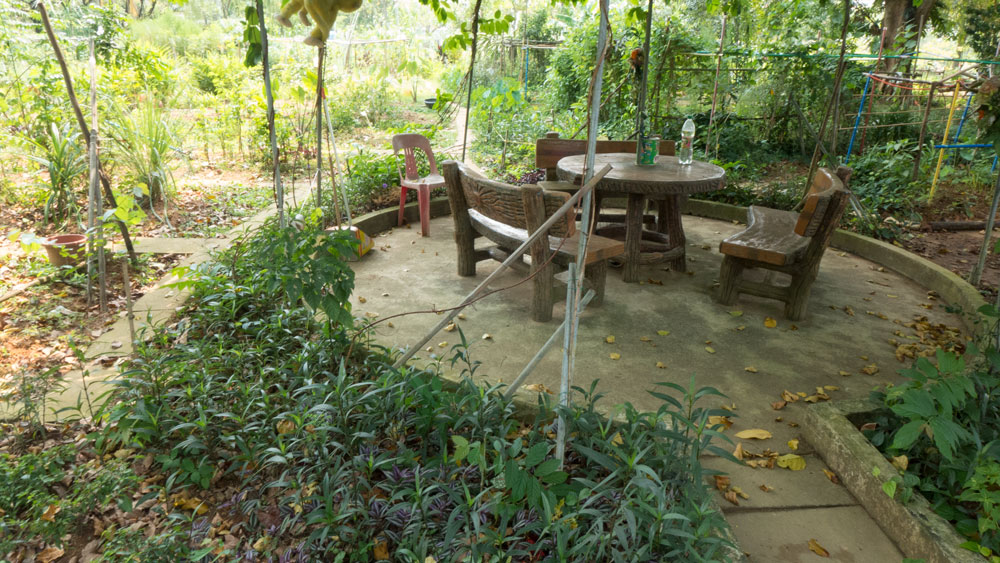 This is the edge of the community garden looking towards the many apartments that surround this park on all sides. 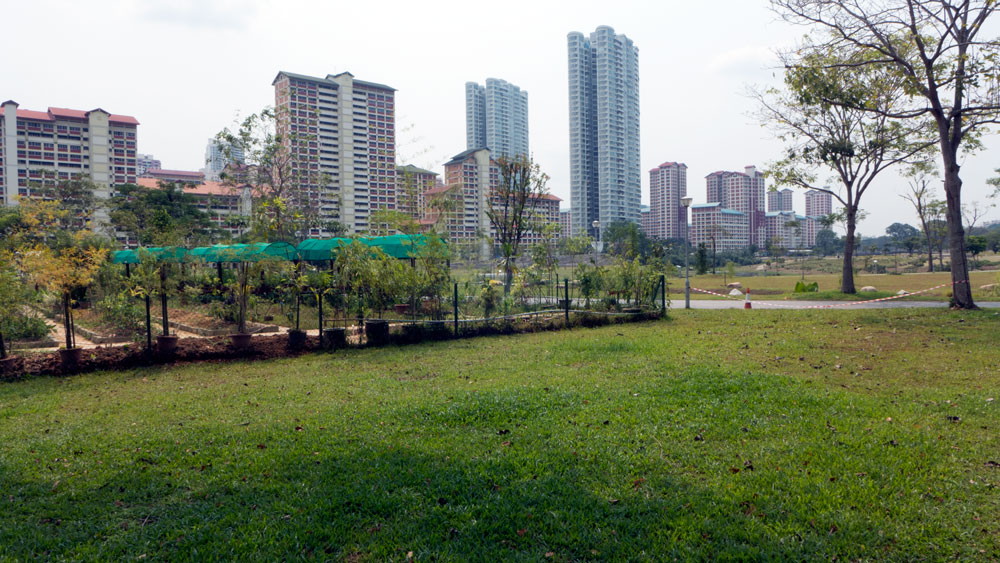 Here’s the restored waterway – with workers doing some cutting of the reeds. 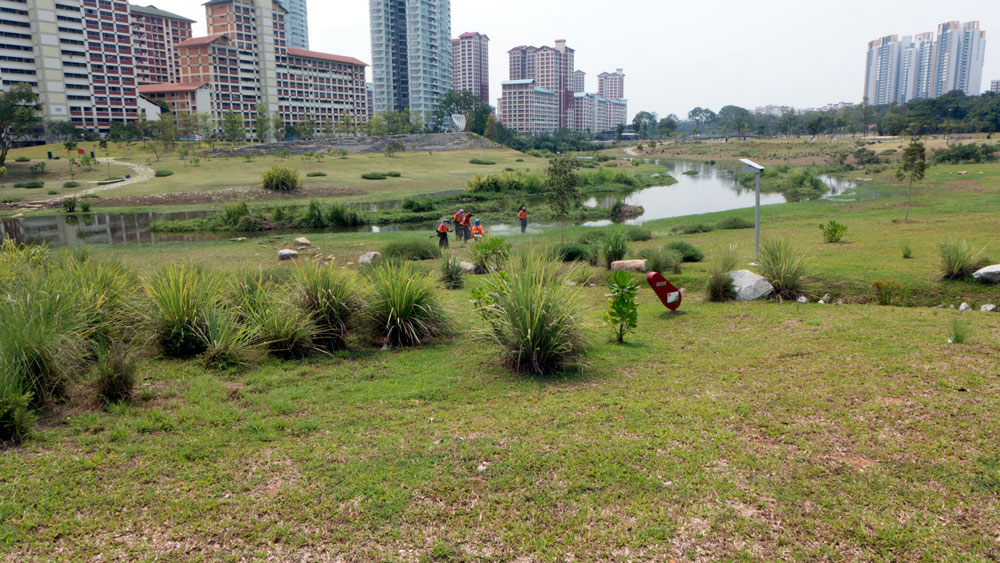 There are children playing just off the centre right in this photo. 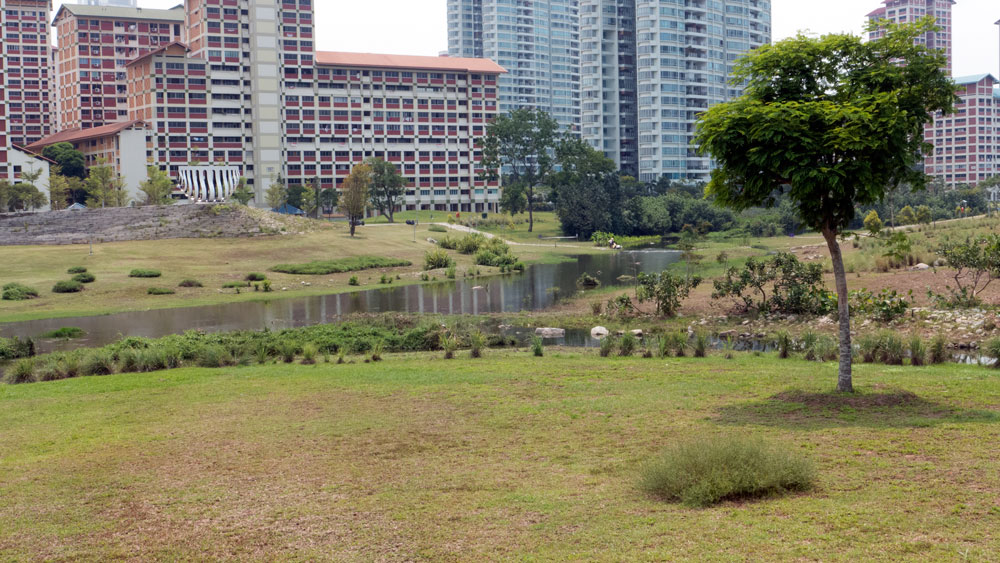 Some simple design features add to the whole site being engaging It was hot. So wear a hat. I worked out that the river when it is in full flood, due to heavy rains, would be just below this deck.

There are many nice design touches. and have an umbrella to keep the sun off, as there is little shelter in most of the park. 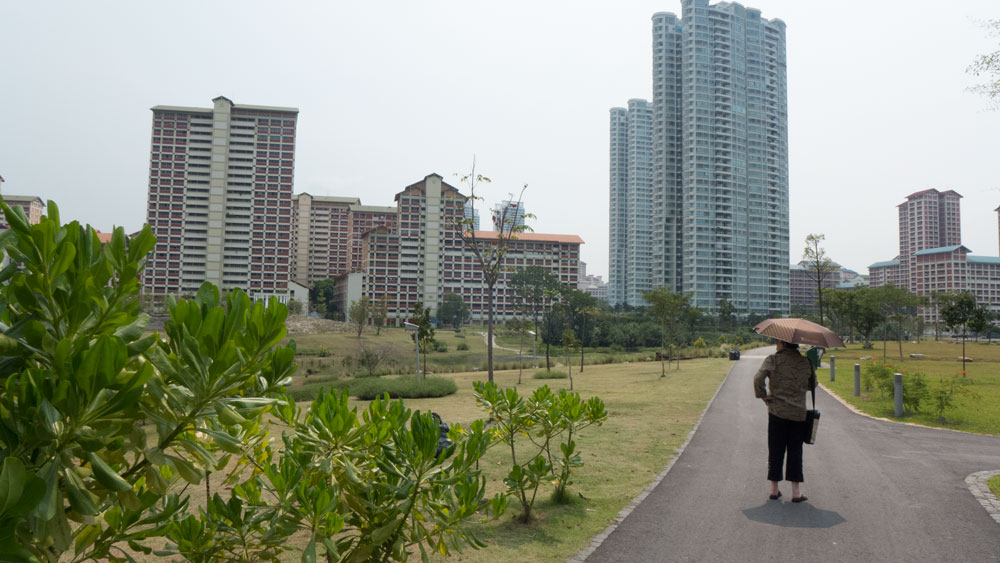 Some very nice seating. I suspect these would be very popular in the evening. 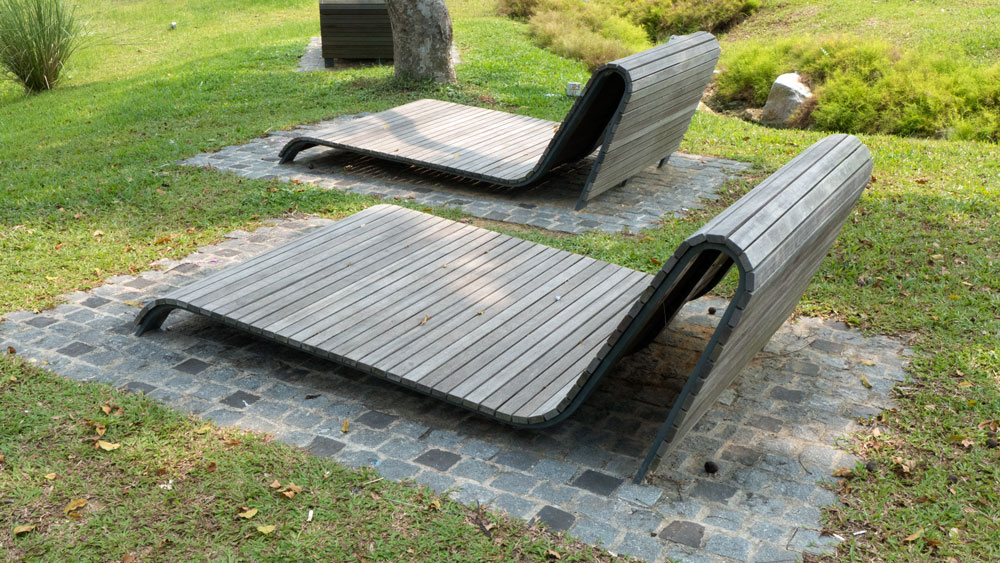 A wall of apartments alongside one edge of the park

and when it is all over, you can return to Newton Food Centre.

The centre is also worth an evening visit as its eating venues are all outdoor. It gets very busy and this adds to the enjoyment with so many people out to eat, to chat, and to have fun. Singapore is a city-state that has faced unusual challenges and because of its political location has worked towards being independent in relation to resources. It has very little natural resources and given its growing population, the available land is very restricted. This island state has not had the luxury that Australia has had whereby the attitude has been, erroneously, that there is plenty of land and natural resources. Singapore has always had to be clever just to survive. This ‘survival’ underpins the government’s actions today. Hence its green infrastructure has had to operate not just to beautify the city but also to assist in improving the environment of the island. (more here)

Bishan Park is a significant part of Singapore’s green infrastructure as well as an important aesthetically pleasing amenity for local residents. From all reports is very well used in the evenings and on the weekends. Given Singapore’s reliance on apartments for its main housing, the establishment and maintenance of such park facilities has become even more important.

The work by the Parks Board and others to have the over engineered concrete drain converted back to a waterway has been a totally successful idea. The park as well as the attached green infrastructure have benefited. The park is a much more pleasant a destination given that the locals can now wander and roam along the water’s edge. This was obviously not the same when it is a concrete drain.

Damian Tang, landscape architect and Assistant Director of Singapore’s National Parks Design Branch, is the person with the Parks Board who led the argument for this restoration. He is to be congratulated. He does not stop there as he also enters the Singapore Garden Festival competitions.

My experience is that many of the initiatives around parks have come from the leadership if an individual rather than a committee. I often ask the question, who was the champion who had the idea and then the dedication to see the idea become a reality?

Damian’s work demonstrates that it is possible for a government employee to work away at an idea to bring about significant change. I would suggest along the way there would have been all sorts of oppositions. That’s the way bureaucracies tend to work whereby any originality is brought down by reluctance or worse still by any idea being handed over to committees where the forces of resistance take their toll.

Bishan Park is a success. I would suggest it needs more treed groves for people to rest amongst. Maybe this will happen with time and more enthusiasms now that this waterway has been embraced by locals and by the international design communities.

While I am sure there have been many congratulations go to the design team that delivered the project, I hope that there were even more messages of congratulations to Damian Tang, Assistant Director of Singapore’s National Parks Design Branch, and anyone else in the government bureaucracy who initiated the concept and then saw it through.