Silly signs indicate the failure of this agency 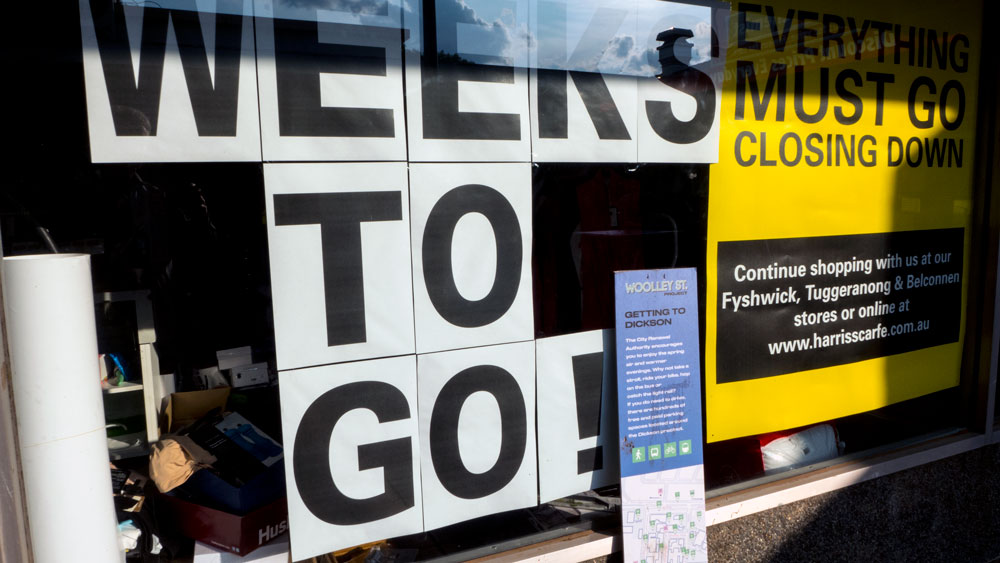 Full marks to someone in Dickson last week who spotted the opportunity to place a discarded City Renewal Authority silly sign up against the wall of a major Dickson shop.

There was a message in this action.

While we have heard from the City Renewal Authority about how wonderful their Woolley Street and Dickson promotions have been, there has been little evidence of a formal evaluation.

Most in the local community were not engaged with this stuff and simply watched it happen – being of little relevance to their lives. That’s what this government does – silly things that must make sense to them. As for local residents?

Many people have asked – did the flow of ratepayer’s monies into these questionable pops-ups, events and colourful thingys actually deliver a long-term benefit to the Dickson shopping centre?

In this case, that government’s sign (now against the window) was all about telling people to come to Dickson and that there was plenty of parking.

Of course, these signs were irrelevant (and silly) as you had to be in Dickson to read them.

With this in mind, it looks as though someone took one of the signs that had been left on the ground as litter and has propped it up against the window of Harris Scarfe.

This store was the major anchor store for the east end of the Dickson shops. Note the past tense there.

Unfortunately for Dickson, the store is closing. They are now pulling up that anchor and departing the scene.

Only days to go and it will be gone. There is very little left within the store.

Does this major closure provide the missing evaluation?

It is pretty obvious that the City Renewal Authority’s splash of money has delivered a negative result.

Do we now wait for the City Renewal Authority’s spin doctors to tell us how this closure is a positive thing for Dickson?