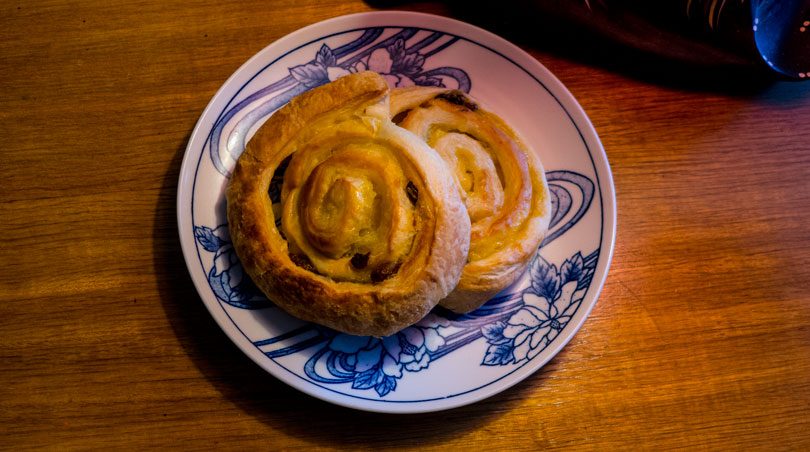 Among the many tempting pastries that are wonderful to eat (but probably bad for the waist-line), there’s one that remains a stand out for me.

That being what some people call a ‘Snail’ or to use the correct term it is a ‘Pain aux Raisins’.

To clarify: Pain aux Raisins are a spiral pastry (see picture above) that is often eaten for breakfast in France. The real ones are made with that melt in the mouth leavened butter pastry shaped in a spiral into which you should find a sprinkling of raisins and a crème pâtissière filling. There are some variations across Europe.

Sadly in Australia it is rare to find Pain aux Raisins made in the authentic manner. Too many times it looks (and tastes) as though someone has read about what this pasty is supposed to be and has used their readily available ingredients to come up with a sad look-a-like.

There are loads of crimes committed by many bakeries in the name of this delicious pasty. It is not uncommon to find them made out of ordinary puffy style pasty – or even baked so that the outside is very crusty and super flaky.

And then there are the many instances when bakeries cannot resist adding all manner of toppings to their attempts at Pain aux Raisins. These monstrosities come with all many of sugary substances and icings dribble all over the top – or the same gooey sugary mixture may be squeezed into the spiral instead of the crème pâtissière.

Bakeries who commit such sugary crimes need to have their pasty cooks taken away and re-educated.

I admit my bias towards seeking out a Pain aux Raisins baked properly is based on the experiences many years ago of happening on these wonders in the streets of Paris. I can still remember my shock to the melt in the mouth flavour and the realization of that this was the way they were meant to taste. Those early morning Parisian Pain aux Raisins were warm, were fresh and yes – they were the next thing to being a melt in the mouth experience.

On occasions I still set out to see if good Pain aux Raisins are being made in Canberra. I know of one shop in Melbourne, but as yet I have failed to discover if there is any bakery in Canberra that knows what it is doing when baking Pain aux raisins.

I have looked at many bakeries and at the markets. In fact one shock I had was at the markets recently when what looked like a reasonable attempt at one, but for some reason that had super-sized their offerings. As it turned out the pastry was far too flaky and they were simply far too enormous to be a bit size breakfast snack.

On a visit to 39 Steps, that gem of a café in O’Connor, I spotted Pain aux raisins on offer. They were not too bad – and made for a great snack with their coffee – which on that day – was also quiet good. Recommended. The café is bigger on the inside that you first expect – having a very small frontage.

And so my quest continues. Is there anyone out there with a similar taste for Pain aux Raisins and is prepared to let on where in Canberra (or nearby) there is a bakery that produce such pastries in anything close to the authentic style?

Please share if you know of such a bakery – one  that knows how to treat their customers well and how to bake truly yummy Pain aux Raisins.

PS: The Pain aux Raisins above were bought in a local supermarket so that I had my own photograph of what I was talking about; I would rate them in taste about 7/10.