Mittagong is situated in the Southern Highlands of NSW just off the highway between Canberra and Sydney. Depending on traffic, it can be one hour out of Sydney and two hours from Canberra. 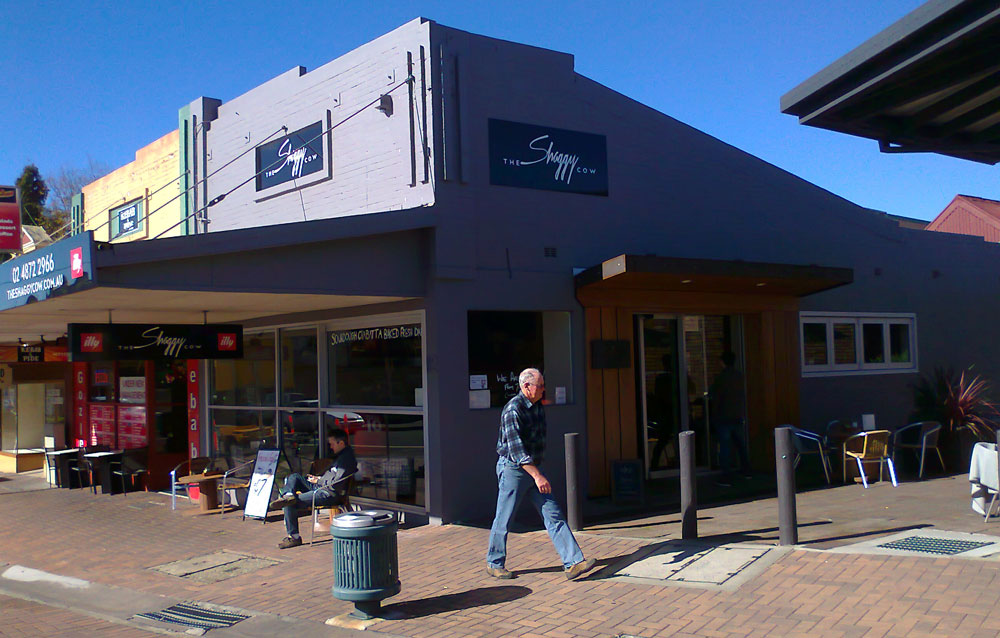 This cafe, now called The Shaggy Cow, changed hands somewhere around late 2013. The former was pretty good. This one is even better. They have imported a little of the typical metro cafe to this quiet country town. We often call in on the way to and from Sydney for a break – at least a coffee and often for a late breakfast.

The service is generally very good (one caveat at the end of this review); the coffee arrives fast and is good. The menu has a good range of foods, and so is recommended.

So far the two dishes I would recommend if you are in for breakfast would be: Tunnel Mushrooms with spinach, goat’s cheese & thyme on wholemeal sourdough toast ($15.90); and the House-made Baked Beans in a spicy Merguez sausage & tomato ragout, with toast ($16.80).

Their breakfast menu is on for most of the day, from 7am. I think they are closed on Tuesday. There is a good atmosphere and at times it gets very busy and it may be hard to get a table. There is also some outside seating.

The caveat, the last time we were there, when we went to pay, the young woman on the till was not being customer friendly – to both the person before me and as well as to myself. Short in her responses, rude and not interested! shame. Hopefully she will have been moved on when we visit next time (I have not allowed this to influence the rating this time).

We have stopped at Brewsters a couple of time for breakfast and at other times just for a coffee and snack. They are not open on the weekend. They have a very strict attitude on the breakfast timing which is closed off on the dot of 11.30!

One day we were there just under and she quickly looked at the clock to check and seemed very reluctant to acknowledge that it was not yet 11.30. (it was 11.26).

We then heard someone just a couple of minutes later being refused the breakfast menu.

Their breakfast, being eggs and toast and things is straight forward and quite good. My observation of other things on the menu being served would be the same; all looking like good standard snacks, healthy soups, sandwiches etc. The coffee is good.

They seem to be very friendly with locals and at times a little short with visitors. This is strange.

updated: November 2014: We called into Mittagong and the Shaggy Cow was too busy and very noisy, so we headed up to Brewster’s to give them another try. It was Saturday and just past 11.30. We took the lunch menu and ordered but while the order was being taken the person taking the orders mentioned that breakfast was available. Apparently it is available all day on Saturday – but we could see no sign to announce this.

The breakfast was a standard eggs, toast and mushrooms with coffee. I have to say that it was good breakfast and recommended.

November 2014 update: Mittagagong must be thriving as as we walked from the Shaggy Cow to Brewster’s, we noted that the former milk bar had been converted to a more upmarket cafe. It was too busy, so we passed by to Brewster’s. But it looked interesting, so maybe another time when on the road to Sydney.