Part One: It is about creative Garden Design 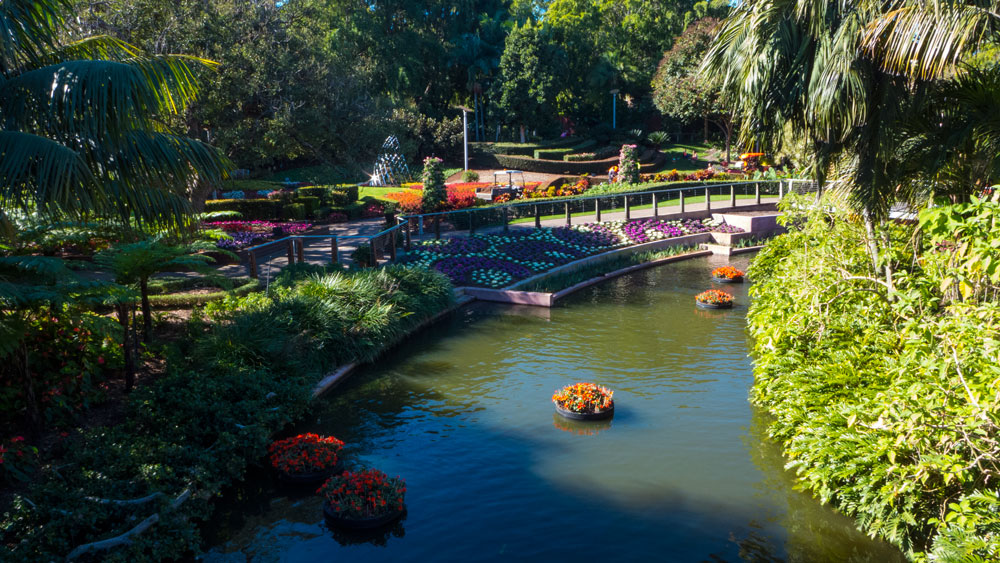 I first visited these gardens and parklands back in 2004 and was very impressed then. This parkland project was a major commitment by the then state government to re-develop a former industrial site and to join it to the existing Albert Park to form one larger parkland, the Roma Street Parklands. I highly recommend anyone and everyone visiting Brisbane to allocate at least an hour to wander about these parklands ten minutes or more away from the Brisbane CBD. (click on any image to enlarge it)

When the parklands were first built loads of people scoffed about them as few people went there and there was no housing anywhere near them. The parklands have now matured, they are in constant use and are now surrounded by apartments. The parklands are a major asset for the city.

The walk around reveals all sorts of plantings and a variety of atmospheres. The walkways are accessible and wind back and forth all over the place. There are lots of water ways and even a waterfall or two. There’s a children playground as well as lots of places for children and active grown-ups to have fun running around and playing all sorts of games. The picnic areas are often occupied, which is a good sign. The cafe serves a nice range of food, not bad coffee and some nice cookies.

You can get to the Roma Street Parkland by walking from the city (if you work out how) or you can get off the train at Roma Street and walk over and pop up near the cafe.

Here’s a host of photographs taken on my most recent visit in early July 2014. 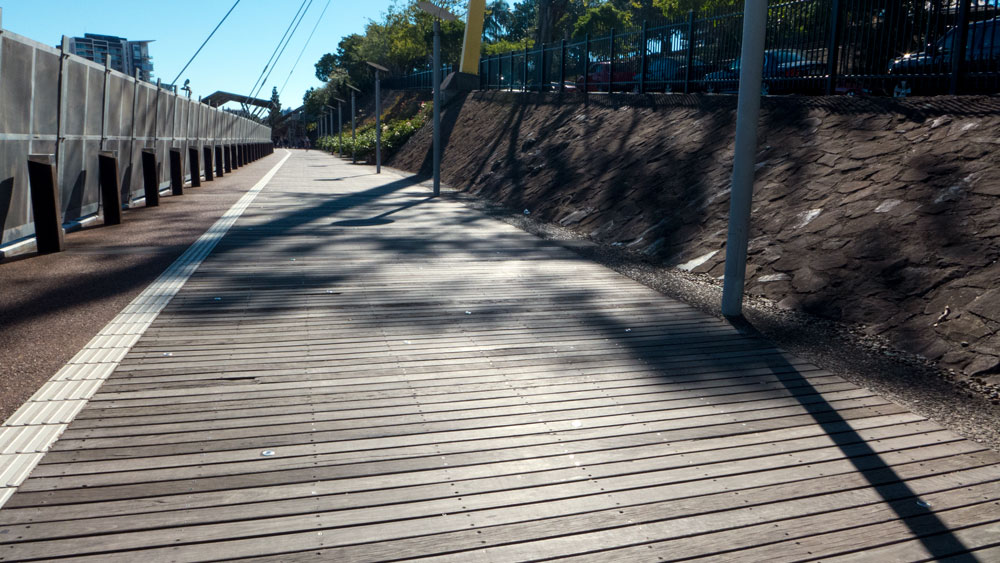 arriving from the city The nearby railway yard and train station 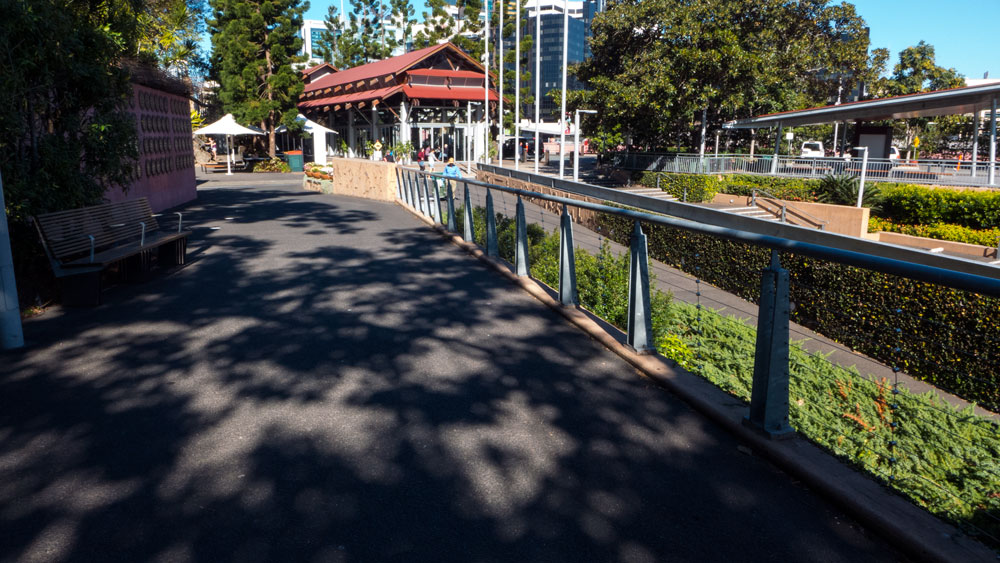 the coffee shop and restaurant 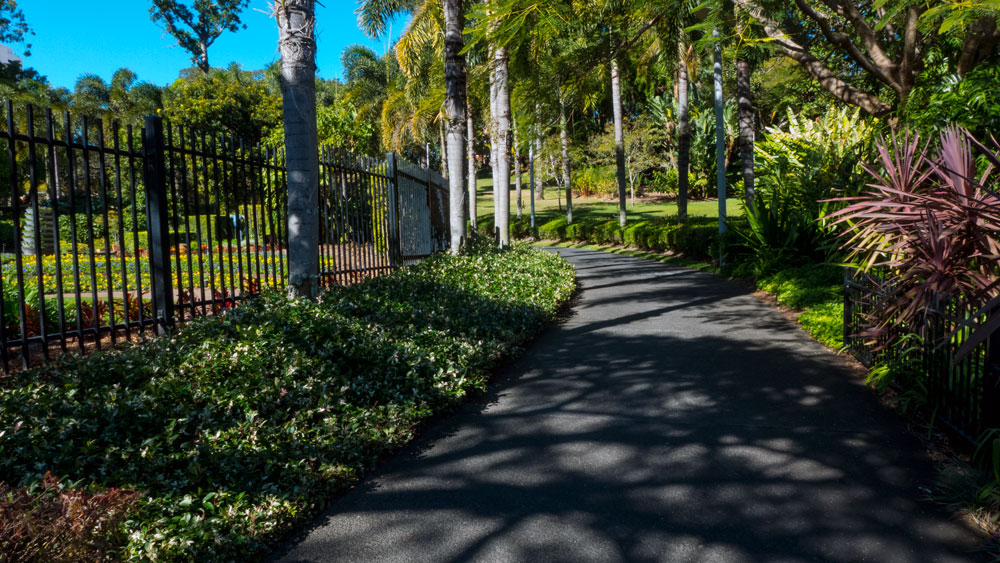 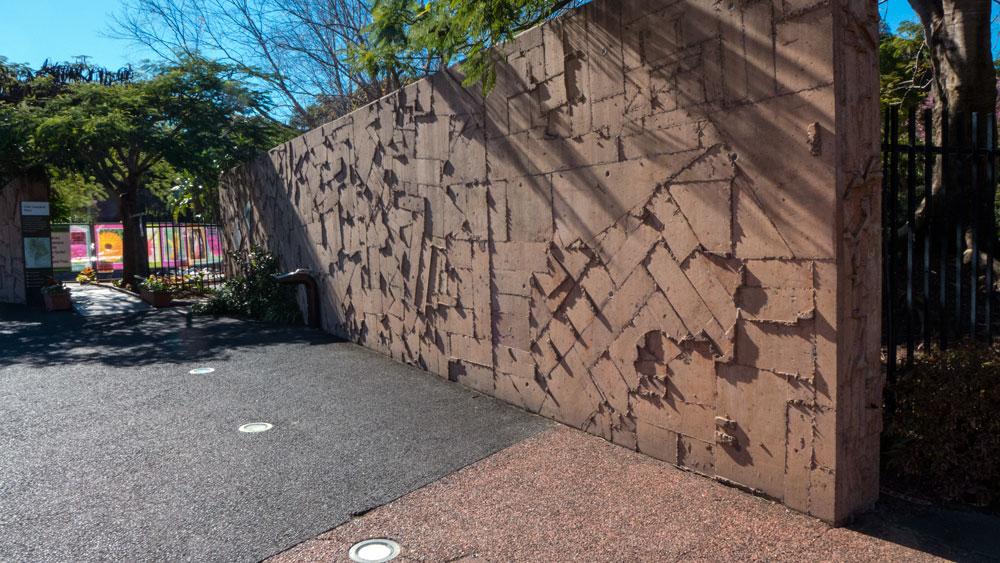 there are loads of beautiful details – the construction contractors had fun. no that’s not a table and bench – it is artwork 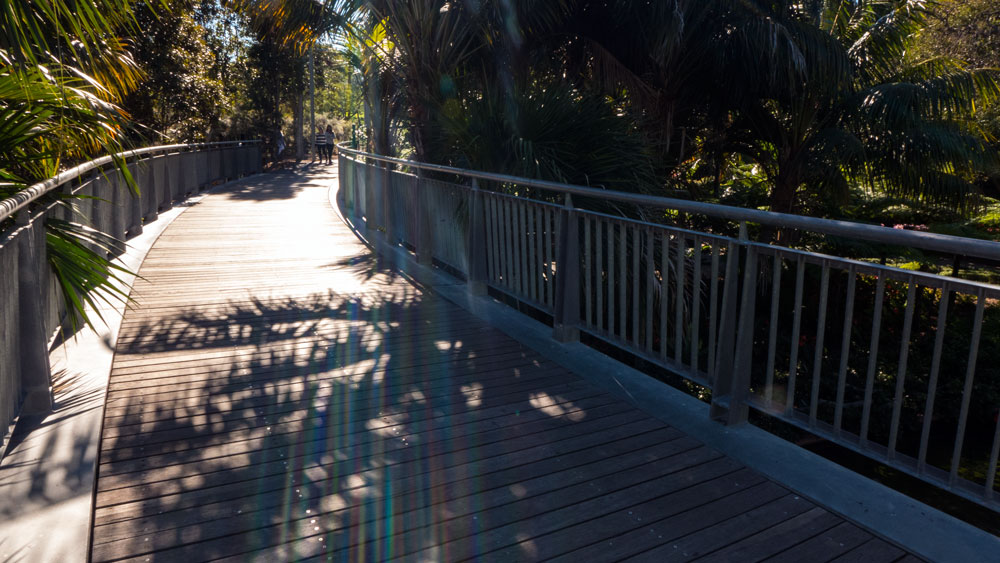 there are pathways, overpasses, bridges and lookouts all over the place. 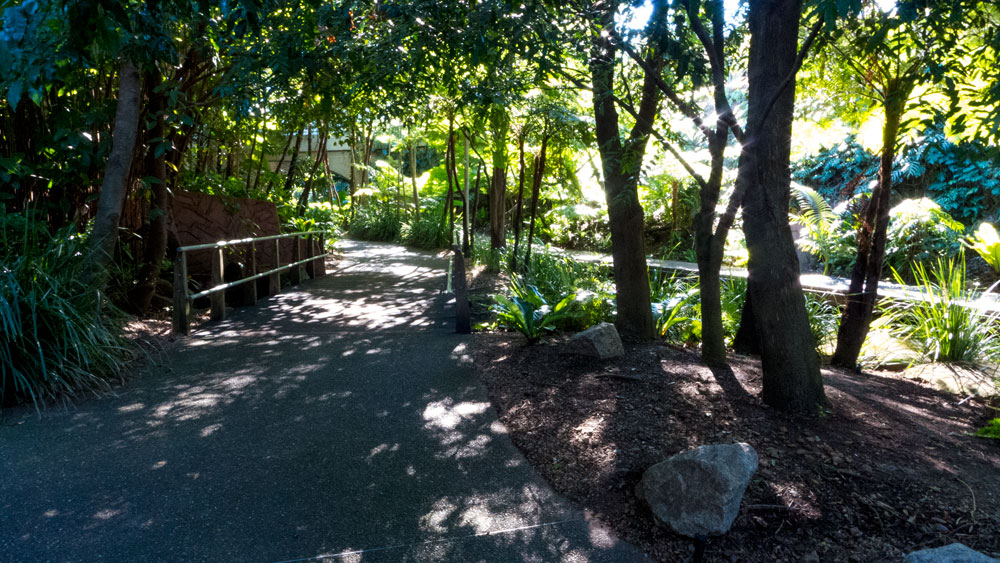 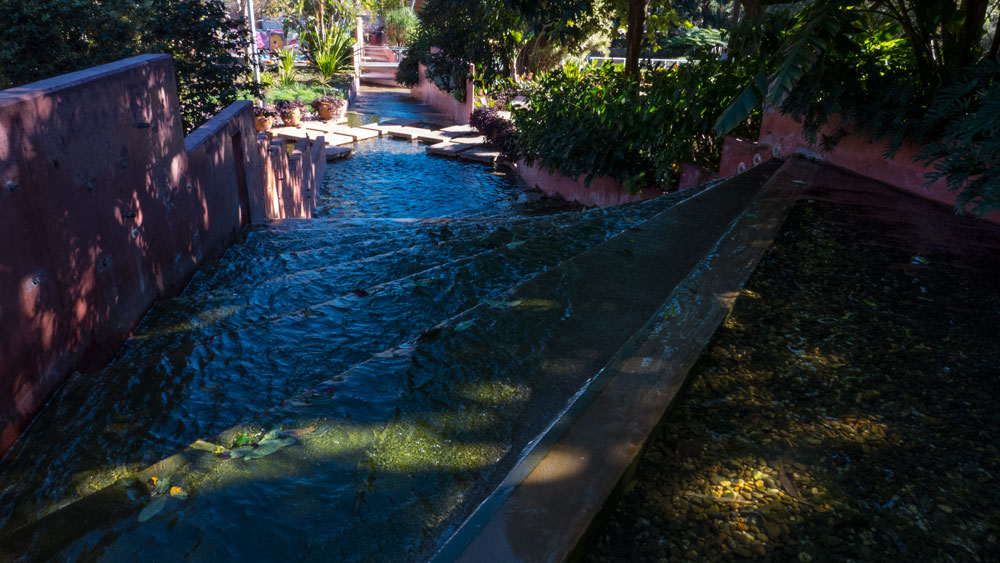 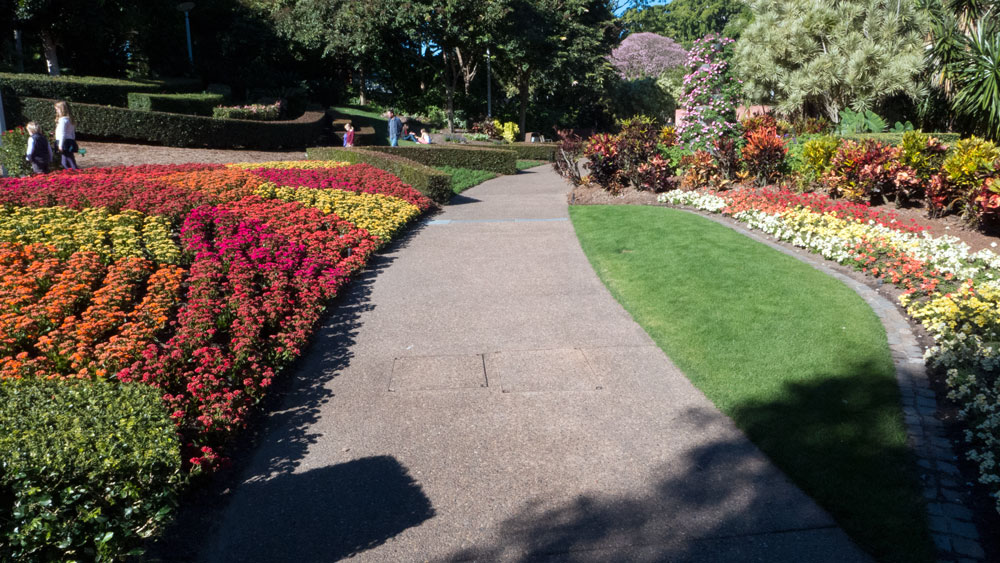 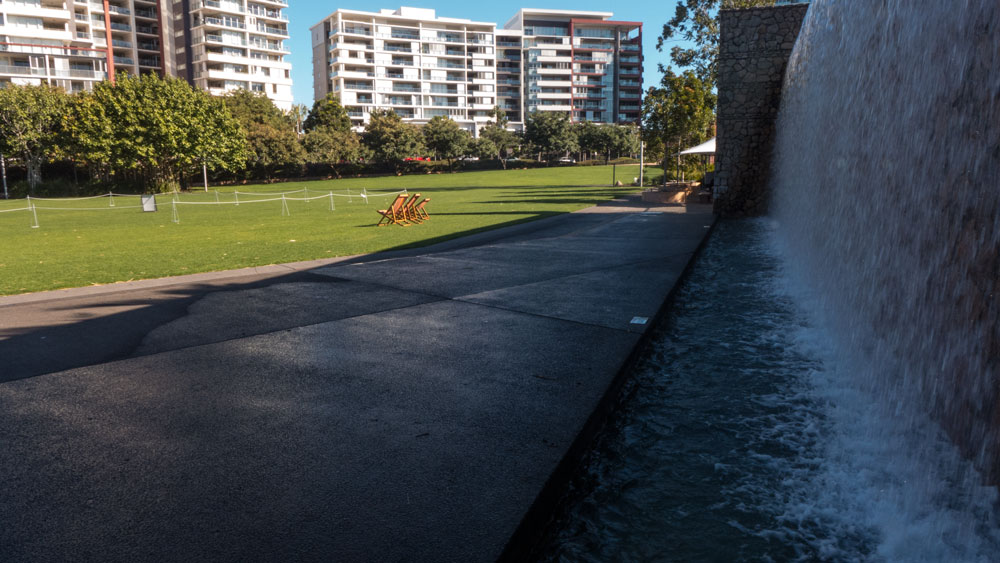 Full marks must go to the then State Government and the Premier, Peter Beattie. Apparently the funds were originally allocated for a garden festival somewhere around the early 1990s but as this did not to happen, the resources were about to be taken away. Peter Beattie was convinced to develop the parklands and so the State Government re-allocated the funds for this great initiative. We were very lucky that they did so then. Given the clowns who now run the state and local government, it definitely would not happen now.

Here’s a 2002 article – click here – the information is as supplied by the designers.

To repeat – A visit to Roma Street Parklands is totally recommended. It is place to wander on your own or in the company of others. Allow plenty of time. It is always an enjoyable experience to see what is happening in the gardens at different times of the year or to sit watch others meandering about. Have lunch and a coffee.

There’s a recent and very long architectural review online that over complicates the fact that the parklands is a fun place to visit. Reviews of such wonderful parklands need to be in user-friendly English and not be cluttered with clichés, architectural-speak and attempts at poetic prose. Seems the reviewer is too uptight, has no real sense of enjoyment and is simply writing to impress architectural colleagues. I will leave it to you to read, if you have the time – click here.

Points were taken off because I witnessed that the maintenance seems to have changed hands and the whole site is not being managed as well as it used to be – and that the apartments surrounding the parklands are terrible – see tomorrow’s posting.