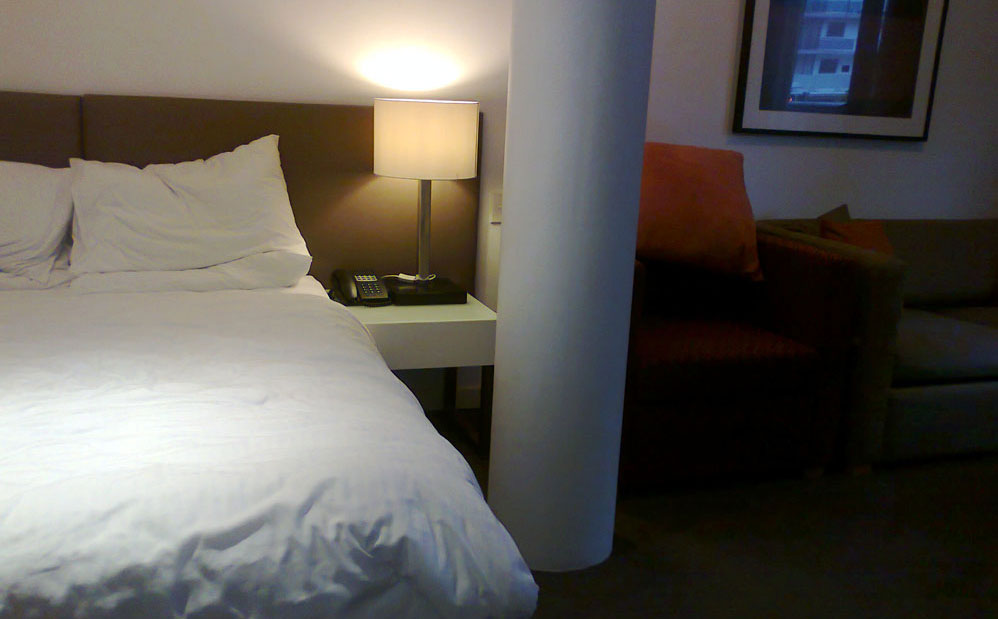 The photo above has a weird architectural feature that reminded me of an event that was even stranger.

Some years ago there was an annual general meeting held within a hotel. The meeting was arranged to take place in a room that was actually two bedroom joined together to form a room large enough for a board room table, its chairs and other furniture such as for people to attend the meeting and sit around the room.

As a result of this change to the architecture, a supporting square pillar remained where a wall once stood.

This meant that during the meeting, this pillar was off to the left of the board table. It also meant that anyone attending the meeting and not sitting at the table  and who was sitting to the left had to deal with the fact that their view could be partially blocked if they sat close to the pillar.

The meeting was well underway with about 40 people in the room and some having to sit around the pillar.

Nearing the end of the annual general meeting, a motioned was moved from a person sitting out of view of those running the meeting, who were seated around the top of the table, with the pillar to their left. The person moving the new motion was trying to undermine some key actions of the association through a motion to have an important initiative overturned.

As the person spoke, the people running the meeting kept asking for the person moving the motion to move out from behind the pillar. He didn’t but kept on speaking.

It was a very weird event. He refused to budge to be seen by those people against whom he was effectively moving the motion – which was really a motion of no confidence.

It did not take long for a couple of people to realise what he was trying to do, that is to move a new motion at an annual general meeting, that this was not legally possible. A brand new motion of this kind needed to be put on the notice papers sent out well before the meeting. Therefore the motion was not allowed.

It was a strange event. An adult male was speaking to a meeting while very consciously remaining out of sight behind a pillar.

This event was embedded in several people’s memory and was often joked about.

People can be very strange, but this event only added to the common perception of this particular individual. For most people who knew him, his efforts at being not transparent were usually very transparent. But I suspect he never worked that out.

Just recently I stayed in a hotel in Wollongong and we were given a room that had its own pillar in the middle of the room. In this case it was a bit puzzling that architecturally the builders had not been able to avoid having such a thing located right beside the bed — as in the photograph above.

If the presence of this pillar was not enough, given the story above, I kept on thinking that maybe someone in particular may be hiding behind it, and that any moment we would hear a voice putting forward some stupid vengeful motion.

People can be very strange.