The 2014 Biennale of Sydney is important and is definitely worth a visit if you are in Sydney.  We visited the two main sections of the exhibition and have uploaded comments.

We did not venture out to the island venue in the middle of the harbour. The marketing for that forecasted nothing too special to devote half a day to the exercise. 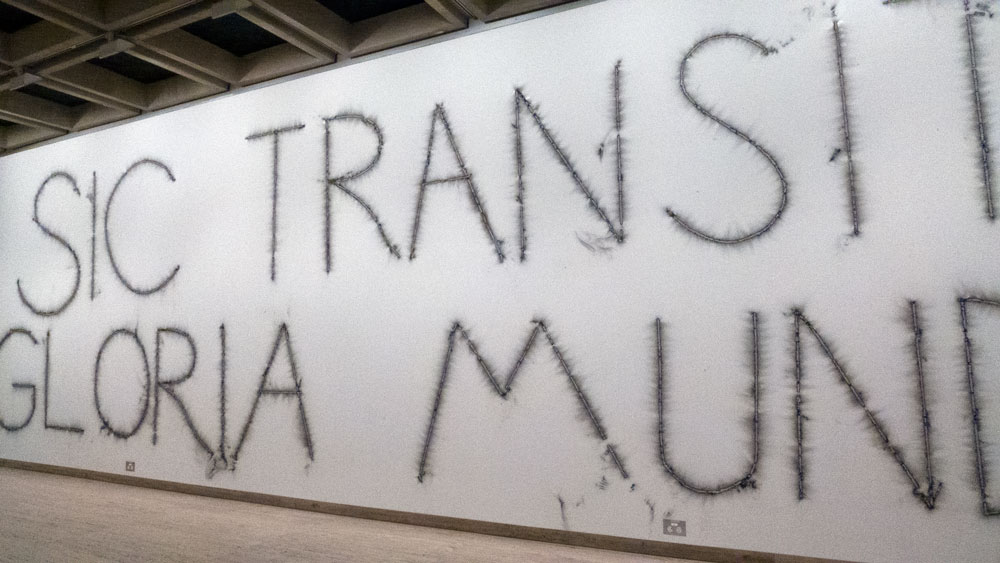 In years previous, the Biennale was in one or two main venues in Sydney. This made it far more accessible than scattering it around especially for the visitor to Sydney. So as in previous years, I had to limit my visit to the Biennale to the two public gallery venues.

I like to go to major public galleries rather than wander off to out-of-the-way places to find the odd artwork or two. The main galleries offer other pleasures besides the Biennale and so the visit is always enjoyable and has more variety.

As I have said in the earlier reports, the Biennale is a mixed lot. There are lots of video works. I wondered how long it would take to watch all the videos on display. I suspect several hours at a at each venue at a minimum. Because of this demand on time, I notice that I am not alone in not staying long with most videos. So I remain skeptical about how much of the videos actually gets viewed.

I must also declare a background with videos. Back in the eighties and nineties there was an abundance of video works on exhibition and I saw heaps of it. I was not that impressed then and remain so with most current video work. There were the occasional good video artworks, but they were not numerous.

When visual artists venture into doing video production they put themselves in the same league of professional film makers and to put it politely, many video artists are amateurs pretending to be something grander with their unresolved issues and techniques.

On an overseas tour to MIT and Germany in the nineties I visited art schools where new digital visual technologies were being explored. So much of the work was super impressive but it was about more about the technologies and new ways of using the digital world. The content in many was light-on and hence once you got over the wonder of what the digital technology could do, and it was truly amazing, then you were left with not much more to contemplate.

In the case of contemporary video art, too much remains largely stuck in exploring the technology, and often badly, with no much engagement or exploration of engaging subjects.

In many cases the messages and concepts with video and many installations are simple and would benefit more from a far more subtle approach.

Case in point was the work by Christian Boltanski recently at Carriageworks. This was an impressive installation. It actually suited the aura of the internal spaces. It was a complicated piece about measuring the number of people being born against the rate of death. To illustrate this Christian Boltanski had installed a huge contraption made of scaffolding and mechanical mills running belts of images and linked to alarms that occasionally went off and two large digital clocks. All very attractive to passers-by going to the markets next door. But really once you worked it all out, the message was very simple. 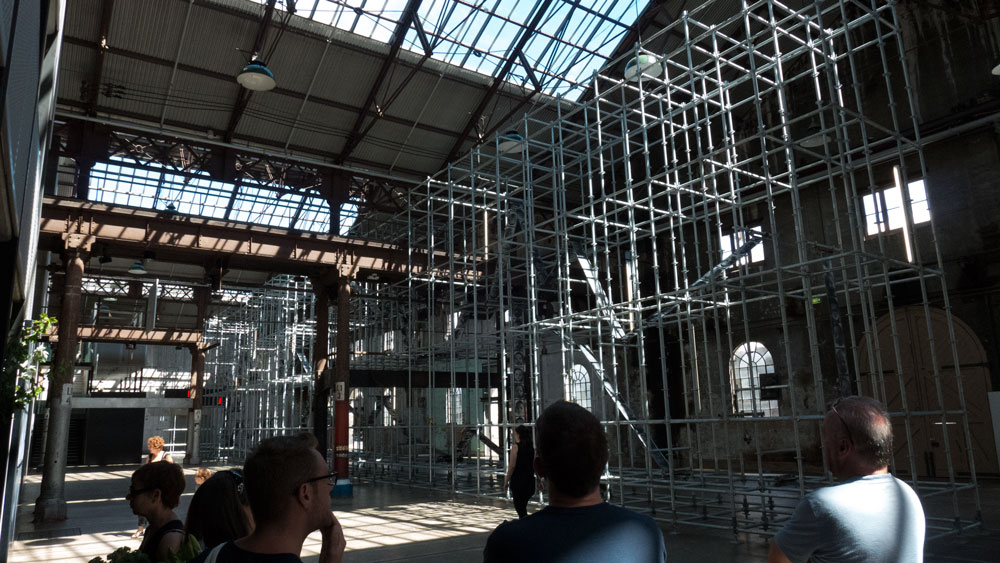 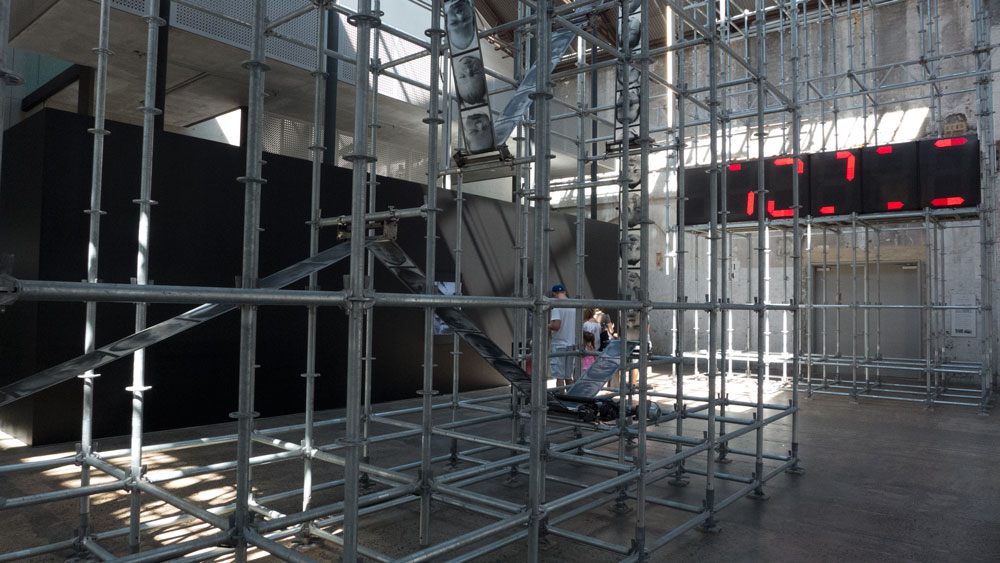 In previous years the aura of a Biennale has been that it presenting a particular look into new works being created internationally. The 2014 Biennale of Sydney presented nothing revolutionary. It was more a quirky look across some of the more evolutionary works by a particular style of contemporary visual artists, much of it being installation or video as has been the case now for a decade or two.

It is indeed important to have such exhibition, preferably in just two locations, and to allow local audiences to have insights into current visual thinking and practice.

Watching the crowds at the MCA, I suspect most were there to occupy time and many visited to allow children some distractions. Even running through rooms and standing in front of projections was common.

On the positive side, especially for the MCA, it has overcome that blockage it used to have whereby the general public felt very reluctant to come through those front doors. The visitation numbers used be super low even though thousands passed by on Circular Quay just outside the front door.

Whatever it is, on certain days they now flock in and wander about. Most do not stay for long in front of any work, but at least now they come in. The problem now is that  there is a combined the noise levels that is way beyond any enhancement of contemplation. This noise is a combination or people chatting, kids yelling, constant overhead announcements and the ever presence of video works with sounds that penetrate well outside their allocated rooms. 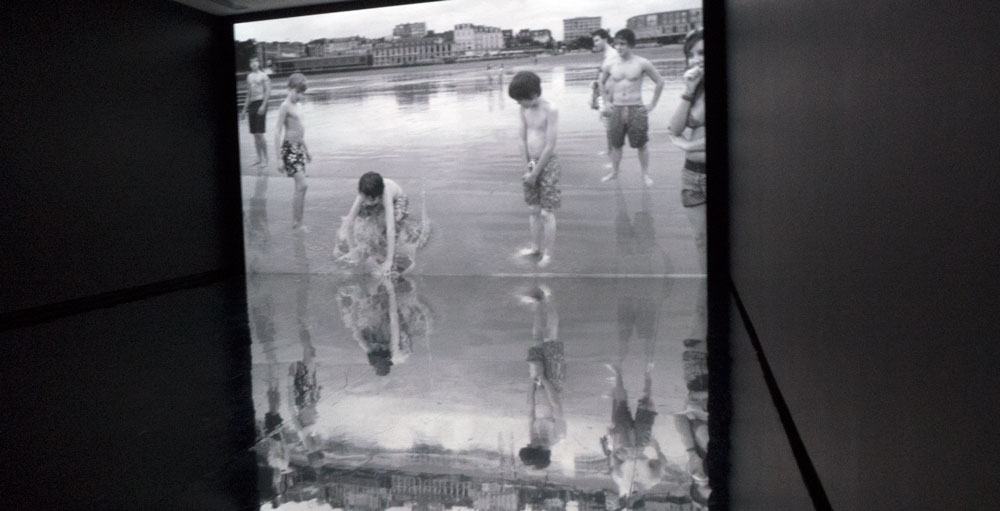 Or in one case, there was a video work that was about the silence of a moment, but the amount of noise coming in from people, children, announcements and lots more was just overwhelming.

So to finish, yes, this opportunity to wander about the gallery and to contemplate contemporary visual arts is to be treasured. I suggest that if you in in Sydney at least visit the Art Gallery of NSW and the Museum of Contemporary Art (MCA). Both good venues especially the former.

After all, Sydney has many beautiful sights.

Footnote: The 2014 Biennale of Sydney gained some extra publicity because of a withdrawal of some artists over the Biennale Chair being associated with the company that was now engaged in provided security services to the Australian Government’s concentration camps on Manus Island for refugees arriving by boat. The chair had a long family relationship with the Biennale and this link was new as the other company had just recently won the contract. The chair was not a sponsor but a philanthropic member, whose father had commenced the Biennale.

The artists, as with most sensible people, were disgusted by their government’s treatment of these refugees. They decided that having any connection with the philanthropic chair who had links to the concentration camp’s service provider was not acceptable.

The response from the Biennale was not helpful They said that they should use their art to make statements and not withdraw. This was naive at best and stupid in terms that artists should not have to be told what their art is to be about.

In the end the chair resigned and withdrew his support for the future. The government attorney general, also being the so called minister for the arts, weighed in and challenged the federal funding body not to fund people and organisations that knocked back any sponsorship, especially on moral or political grounds. The minister for the arts as he has done previously, has portrayed himself to be the minister against the arts that represents freedom and liberty of thought.

The exercise provided the federal government to portray the arts as yet again something elitist and that maybe should be not supported by the government.

There was a better solution here and the artists and the Biennale needed to come to terms with the changing political environment and to have worked through a much better solution. I do not blame the chair as he was a philanthropic supporter and contributor well before the connect to the concentration camps came about. His withdrawal made sense as he became the target of attack as artists and others vented their disgust with the government, but he was bearing the brunt of it.

This was not an arts episode that anyone could be proud of. Creativity should have delivered something better.