The section of the 2014 Biennale of Sydney at the Art Gallery of NSW is also a mixed lot. (click here for previous post on the MCA). On the day we visited most the rest of the gallery was busy, which is normal for the AGNSW on any day of the week. As we entered the Biennale section we noted that only a few people were in this exhibition.

The first works were photographic. There were of limited interest to me.

The next work was a video work. Passed by quickly. The next was a good laugh. It was an exhibition of books from an institute lending library. These books had never been borrowed by anyone! An interesting and quirky statement. But that was it.

Off in the distance somewhere was a crying voice.

There followed a room of several works with a video work at the end. Again there were all of interest but none were able to hold the interest once they had been taken in or in the case of the video, watched through.

We were now closer to the singing or crying voice.

The next room has a three panel of a woman in a cave and she was wailing or singing a song of prayer. This voice was loud enough to penetrate the whole exhibition. So no matter which work you were looking at you were conscious of this voice. Other than that, I passed on quickly to the next.

The next rooms had three works across three spaces. A larger video work in one. Another had an installation, which once you read the wall information, you quickly worked out what it was about. Then we looked at the layout of objects. Curious, but not so engaging. There may have been a simply and more subtle way of relaying the message. 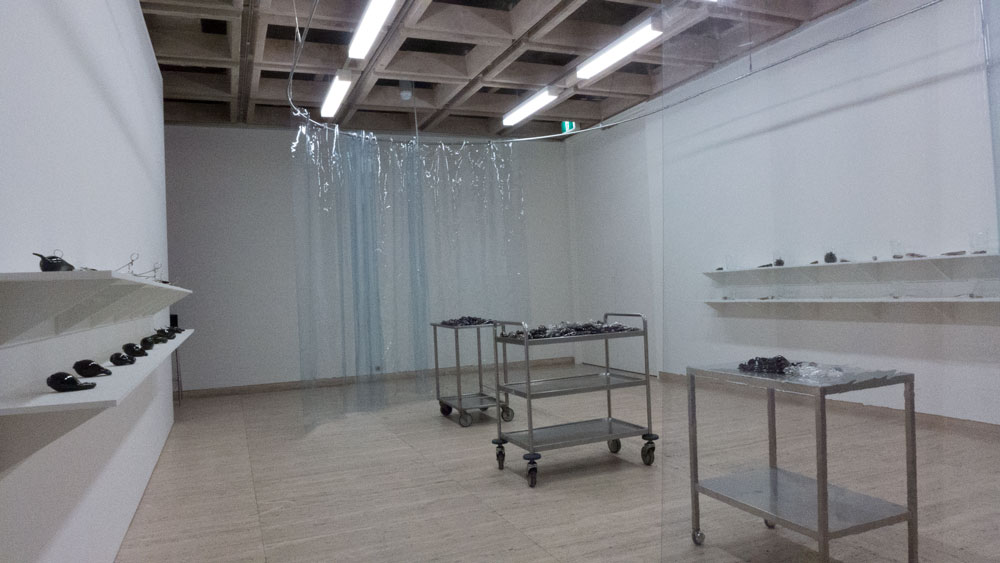 The whole thing has a political message that was easy to understand.

The work in the middle room, by Michael Cook, was titled Majority Rule.  There were eight large photographs that had people populating the various spaces, often places of power, such as Parliament. The catch being it was all the same person and the person was indigenous. Here’s the official blurb on these works – click here.

I have seen works by this artist previously. He’s fun. The underpinning messages are important and serious. His work is always intelligently intriguing.  Check out his own artist website – click here. (unfortunately he has used flash for the various projects so there are no direct links to them).

The works in Majority Rules, as with his other works, can be enjoyed as beautiful prints, as political statements and as engaging arrangement of the elements involved. You smile even though the message has a large punch.

In the following rooms there was a projections and other associated works and then one final video. All these we of interest, but nothing beyond a superficial wonder about what was the work about. After that there was no particular aesthetic to hold the interest.

On the way out there was another work which was a wall of screen works. These were faces that were all taking turns to say ‘I forgive you’. 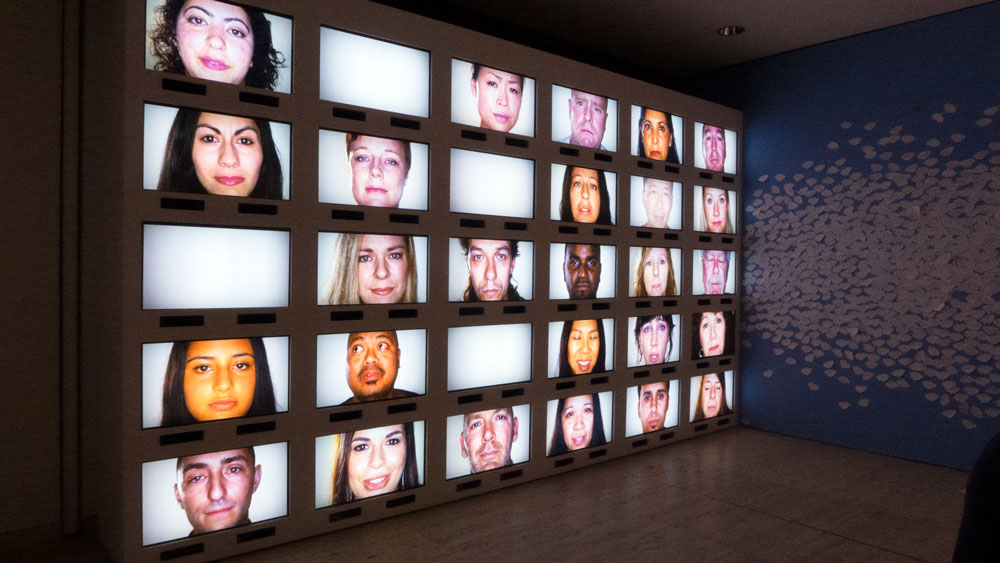 At various times the faces appeared and then disappeared and collectively and individually made the statement. This piece worked as the message was emotional. word of warning. It was not until we left Sydney that we realised we had missed one work at the Biennale at AGNSW.

The work by Deborah Kelly is in the corridor that runs along the back of the exhibition and joins the entrance of the exhibition to the other entrance near the restaurant. Here’s an image –  and click here for an online article on these works.

I suspect we have missed one of the better works to be seen.  So I guess it will be back to Sydney sometime soon – before June 9th.

Overall I have some comments to say about the Biennale and the use of video – see part three of this three-part piece – and click here for Part One: the Biennale at the MCA.

I would recommend a visit to see the Biennale at AGNSW if you are in Sydney. I would not fly across the country for it. But, having said that, I totally recommend a visit to the AGNSW, including the Biennale, as it is a great gallery to wander around any time of the year. The Biennale is of definite curiousity value. It provides one curator’s view of contemporary visual arts and therefore adds to the visitor experience to this wonderful gallery.