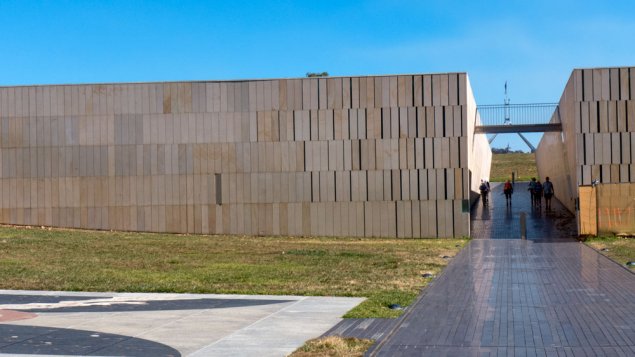 One of the local manifestations for Centenary of Federation in the year 2001 was the building of Commonwealth Place down on the side of the lake in the axis between Parliament and Mount Ainslie.

This key site was initially listed as a possible place for the new Parliament House and hence it remained as an open space for many decades. Then came the decision by the National Capital Authority (NCA) to mark the Centenary of Federation with an architectural statement and subsequently an architectural firm was awarded the contract to deliver what is now known as Commonwealth Place.

Following the opening in 2002 the NCA hosted all forms of entertainments upon the open lawn areas. Sadly it followed that the NCA had much of its funds withdrawn and so these subsidised events were to be no longer. The space has since fallen off the radar with most people unaware of its purpose. The most popular use I have observed is by energetic boot camp groups. Most of the time people simply meander down the centre passageway without paying much attention to the built forms.

I took photographs back in 2002 just after it was opened and have made comparisons to identify the changes to its condition. The contrast is quite marked. The place is in a state of neglect. There used to be maps on the inner walls, but these have faded. There were objects in the special glass cases but these have been removed leaving displays of mossy dirt. The curved grass areas were well kept but they are now a mess. Numerous stone panels have serious water stains on them. On a recent visit I noted work has begun on some repairs to the main wall.

The main features of the site are the curve-grassed areas. These allowed for two restaurant sites under each wing. There has always been a restaurant to the west, but no one took up the lease for the eastern one. Instead various institutions have used this space for exhibitions. At present the NGA has contemporary art in there, and if you haven’t already, I would recommend a visit. 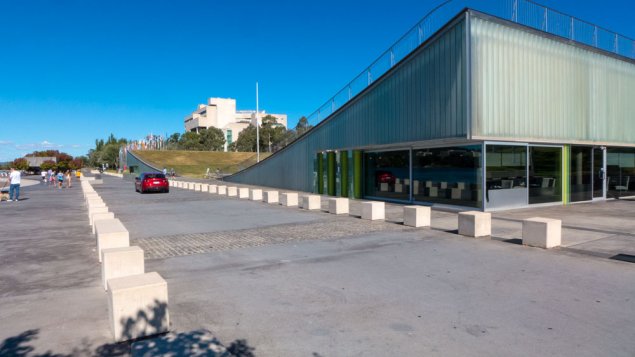 Originally the area in front of Commonwealth Place was a through road and the lakeside walkway. This was altered to include lines of very ugly tank tap like concrete blocks. Maybe the NCA was expecting an invasion? The foreshore was later very successfully extended to include a wharf and more space for people to gather, with two architecturally designed kiosk boxes at each end. The coffee shop is usually very busy on the weekends and is a nice place on a sunny afternoon to meet friends.

The original designs that I have seen for Commonwealth Place included a clear view of the Parliament House buildings through that central corridor. Unfortunately for the designers, another NCA project happened about the same time and this plonked the Reconciliation Place mound at the top of the corridor. As a result of this lack of coordination, it is now possible to see the Parliament’s flagpole only rather than the building itself. Project coordination was a mystery for the NCA back then. 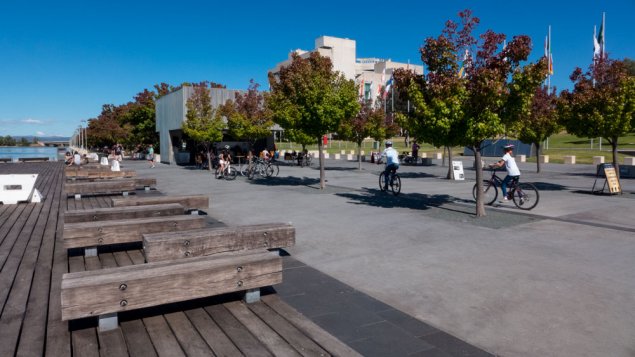 The NCA’s architectural led solution for Commonwealth Place has not been a success. The changes closer to the lake, being the new wharf and coffee kiosk, are very successful. Those very ugly and inappropriate huge concrete blocks lining each side of the road need to be taken away and the road closed off to through traffic except for delivery vehicles. This would open up the whole area to be more people friendly.

Commonwealth Place has an aura of something of little interest and therefore requires a rethink. The curved open grassed areas should be better maintained. The architectural walls and the landings above them are a design failure. The wall and the higher landings should be removed and replaced with terraced gardens with native plants from all the states and territories. Such terraced gardens would open up the area for more visitors.

I hope that one day soon the means will be found to make some significant changes by reworking this important landscape to deliver something that would be a more appropriate such as terraced landscape gardens to celebrate the Federation of Australia.