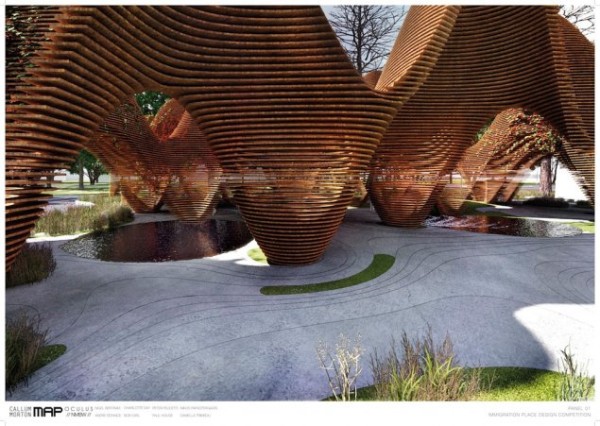 Over the years I have wondered about the placement of public art and memorials in and around the parliamentary zone. Here are three stories.

A couple of months ago the winner of the Immigration Place design competition was announced. The information available online (including the above image) suggests it will be an intriguing installation. The jury did well and I did not think much of the runners-up.

The puzzle for me is the site chosen for this memorial. Given immigration remains such an important part of Australia’s history, I would have expected such a memorial to be allocated a very prominent site so as to be easily noticed and accessed by visitors to the capital.

Instead, the memorial is to be located on a small patch of land near a side car park outside the National Archives building off the top of King’s Avenue. To put it politely, it has been shuffled off to a far corner – almost out of site and out of mind. Thanks to the boldness of the artwork, people driving past may notice, but I doubt many will make the effort to stop to appreciate the artwork and messages. 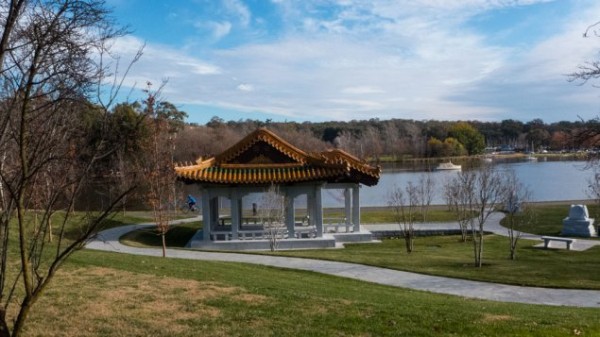 Meanwhile, on the other side of the parliamentary zone, the ACT Government recently installed the new Beijing Chinese Gardens. As I said in a former review, this is a successful addition to the parklands down by that corner of the lake.

The point I did not raise in that review is that the positioning of these gardens in an out-of-the-way area means locals and tourists simply do not realise it is there. However, I have observed cyclists coming to an abrupt halt when they become aware of what they have stumbled onto (not literally).

Given that people have been arriving from China, sometimes as indentured labour (polite words for slavery) since the early days of the NSW colony, and now form the largest continuous migratory group outside those from England, surely these gardens could have been front and centre on a far more prominent lakeside location.

I appreciate the gardens are located to close to the Chinese embassy, but I cannot imagine that the Chinese government would have objected if a larger and more significant plot had been allocated in a more visible area elsewhere along the lake foreshore. Is this a not too subtle message about the official attitude to the Chinese contributions to Australia?

Now, a story to make you laugh and cry. Back in 2003, a special National Capital Authority (NCA) selection committee announced to the world that a design had been chosen to mark Australia’s centenary of the vote being given to women – a suffragette memorial. 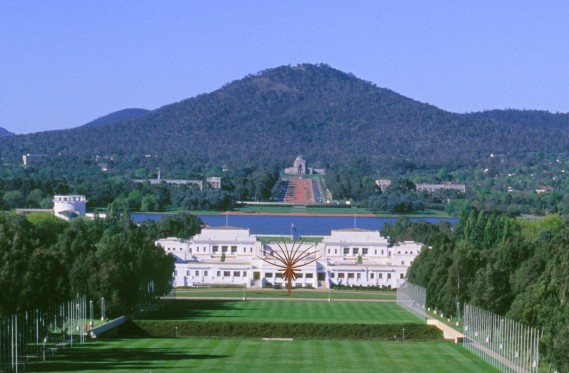 The memorial was titled Fan (artists’ illustration above). It was 18 metres tall, would move with the wind and would be located just behind Old Parliament House – so it was to be a significant feature on the axis from Parliament House to the lake to Mount Ainslie. All hell broke loose. The defendants went on the attack, some ranted more than others.

Those against were just as vehement. The stories are endless—and would make for a great mini-series. It was cancelled.

Instead, a polite small fountain thingy was designed to sit delicately and quietly in one of the rose gardens to the side of Old Parliament House where, yet again, it was to be more or less out of sight and largely out of mind.

This should have been a nationally significant memorial. It was a complete stuff up by those within the NCA bureaucracy. The best anyone can say is that at least something token-like was done despite all the carry-on by people on both sides of the argument.

Sadly, this illustrates how decisions about such important memorials can be derailed, even when those involved probably agreed that the anniversary deserved to be marked with something significant.

You would expect that those in decision-making positions for our national memorials and landscape features would ensure that the creative design solutions were appropriate and were sited in easy to find and significant locations.

Maybe these bureaucracies are simply there to guard against these foreign intrusions onto their vast sacred parliamentary lawns.