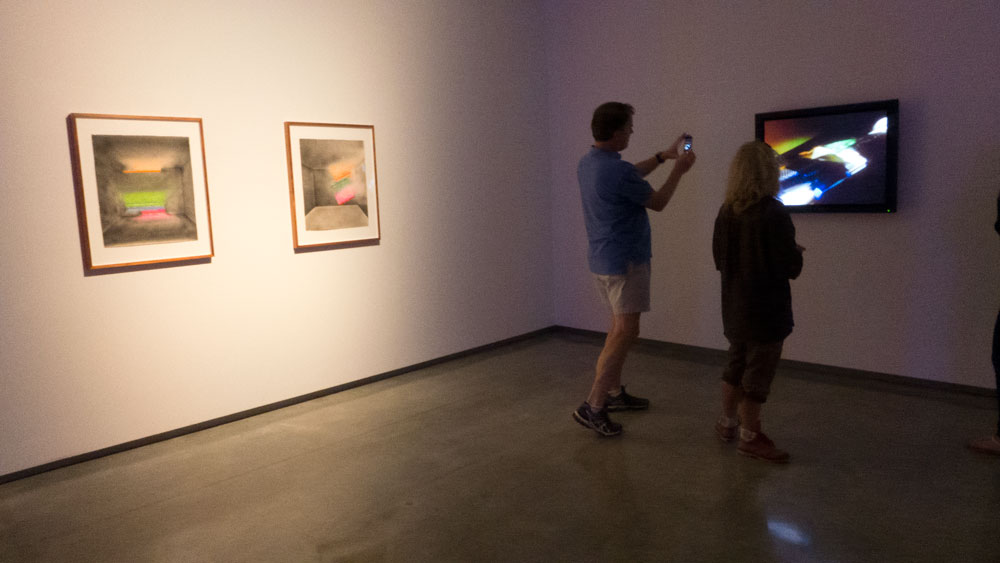 I enjoy the exhibitions at Sydney’s Museum of Contemporary Art (MCA). However ever since they completed their renovations and now attract more people, something has happened in how some visitors behave.

I am not sure what has caused this, but in recent years there seems to be more people who wander into Sydney’s MCA and then annoy others through their bad behaviour. I have also observed that the security do nothing to deter such inappropriate behaviour.

During one exhibition about a year ago, there seemed to be a lot of family groups visiting. This should be good as it is a sign of people accepting contemporary art. But I noticed that the place was more like a playground. Children were running around and playing games and this behaviour was being encouraged by their parents. It was a very noisy place to be. The security was doing nothing about it – in fact several were busy on their phones instead of observing.

There was a room with a slow video about an incident on a beach. A child kept running up to the screen and pointing things out. This behaviour was accepted and was being encouraged by her parents.  I left and returned later to take in the video.

On another visit, the main exhibition room was being invaded by groups of people who were quickly moving from artwork to artwork and then suddenly stopping in front of one and writing something down. This they did this while completely ignoring anyone who happened there standing there taking in the work. It turns out that it was a treasure hunt game being run from in front of the building whereby small groups would then run inside to spot clues within nominated works of art. The place was operating as a play ground at the expense of those who were there to see art. The security was ignoring the situation.

Then there was my last visit. In the main exhibition room a couple were doing their photographic assignment. She posed and he photographed. I am not talking about a quick selfie here. This was going on for all the time we were there. It must have been ten minutes or more and they completely ignored anyone else who may have wanted to see the artwork. The woman posing was at time leaning on the wall and getting very close to elements of the artwork – but still no reaction from security. Very strange. 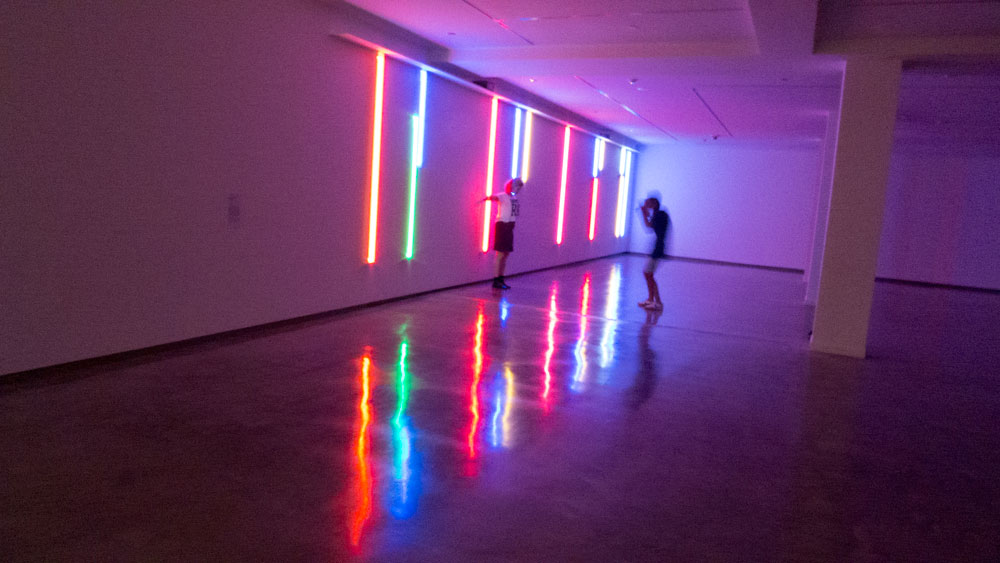 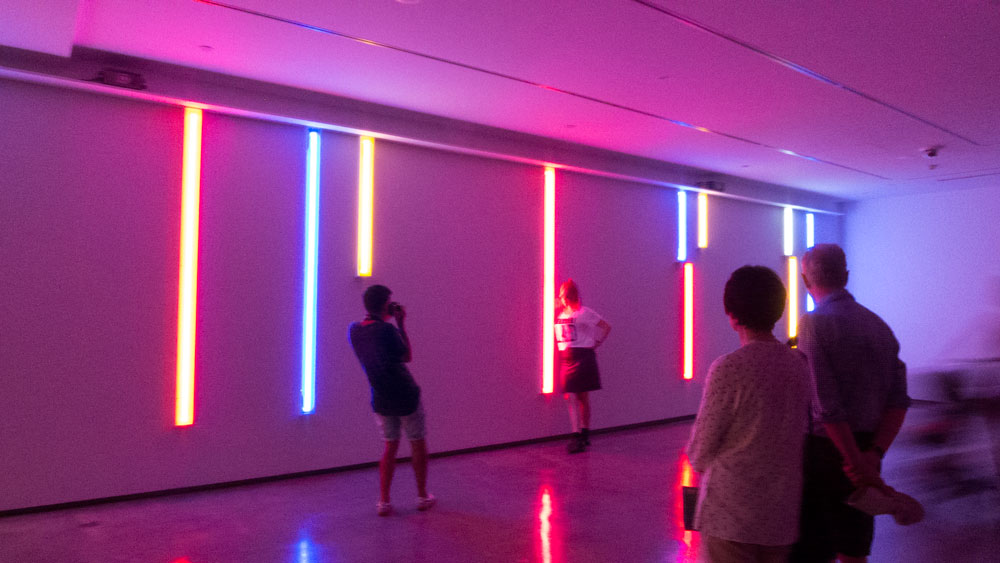 Eventually someone said something to the security staff in the room who till this point was simply observing this inappropriate behaviour. I listened in while someone complained and could hear that the security staff was saying that people were allowed to take photographs etc. But this was not the problem.

Taking a photograph was one thing but using one artwork as a prop for ten minutes is another. 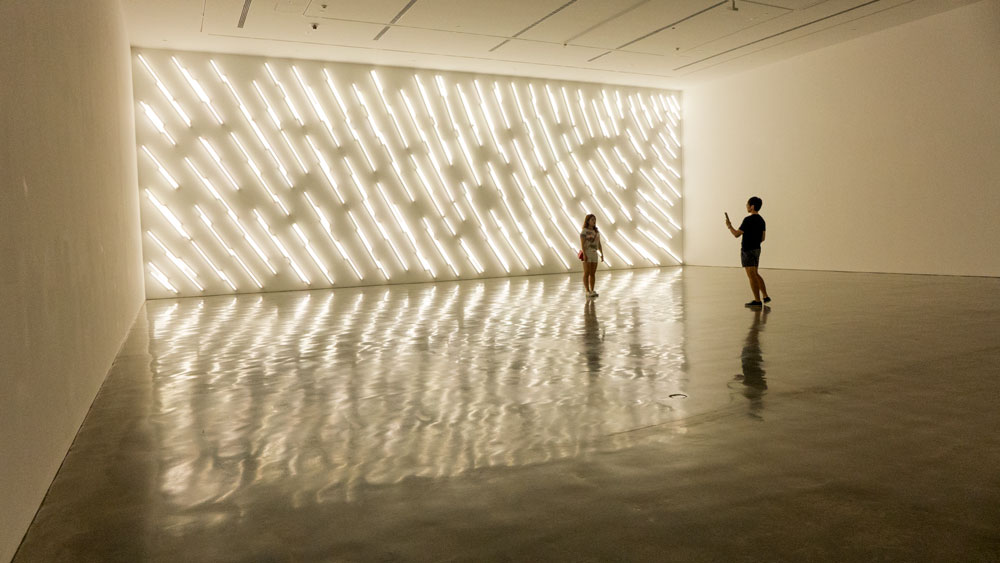 In another instance, see  above, the couple walked in and walked straight over to set up their photograph of each other. This took a minute or two as they swapped places and posed. Then left without taking any time to actually look at the work. The work was a prop for their photographs. As for the people standing along the back wall who had entered the room and were standing there taking their time to look at the work, they were ignored and the security also ignored the situation.

With the photograph at the top of this page, one woman was quietly taking in a video work. She was joined by this guy taking photographs. He moved in close on her left to get one shot then moved around to do the same from her right. He had no sense of keeping a distance and casually moved close to the woman invading her space. He took at least two photographs and moved on. It was a video so by simply jumping in and taking his photographs there was no way he could have watched the video.

It seems that all manner of inappropriate behavior is now acceptable at the MCA. In ever public art gallery there are occasional incidents of people doing strange things. But it seems that there is something about the MCA that encourages far more than you observe in other galleries— and I am a regular visitor to galleries. It is a frequent occurrence at the MCA and the security usually observes these without any reactions – meaning the visitor experience for others is suffering. Whereas in other places bad behaviour is the exception and the security will often step in.

While the MCA has been successful in encouraging people to come in – there is something about the place that is encouraging all forms of bad behavior from visitors to their exhibitions. 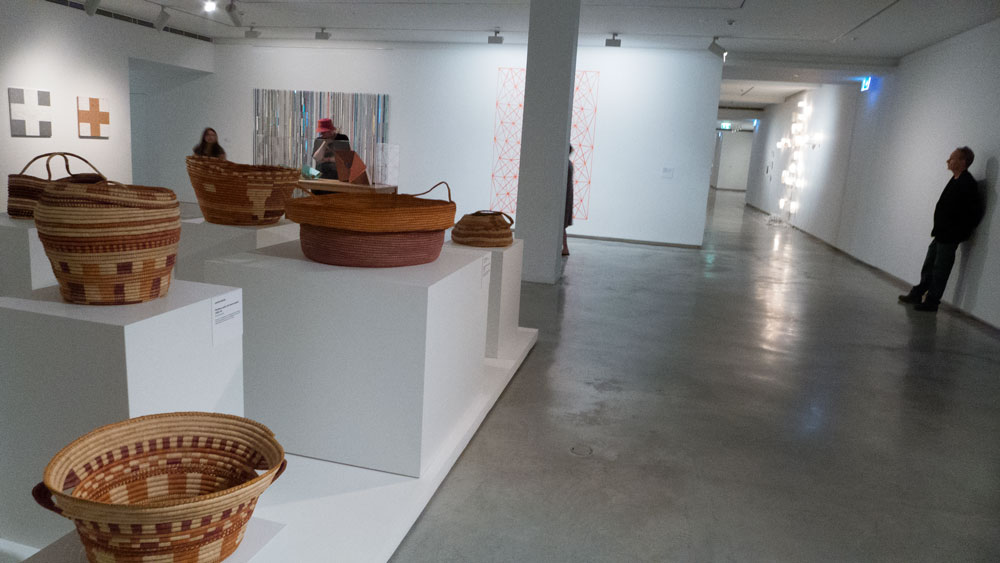 a word or two to finish:

Sydney’s MCA is well worth the visit despite the above bad behaviour. Their special exhibitions are varied and sometimes they are very good and at other times, not so great. But combine all that with their collection exhibitions, and there is always a good reason to visit a couple of times a year.

and here’s that Peter Kennedy work (below) with no photography shot in progress. 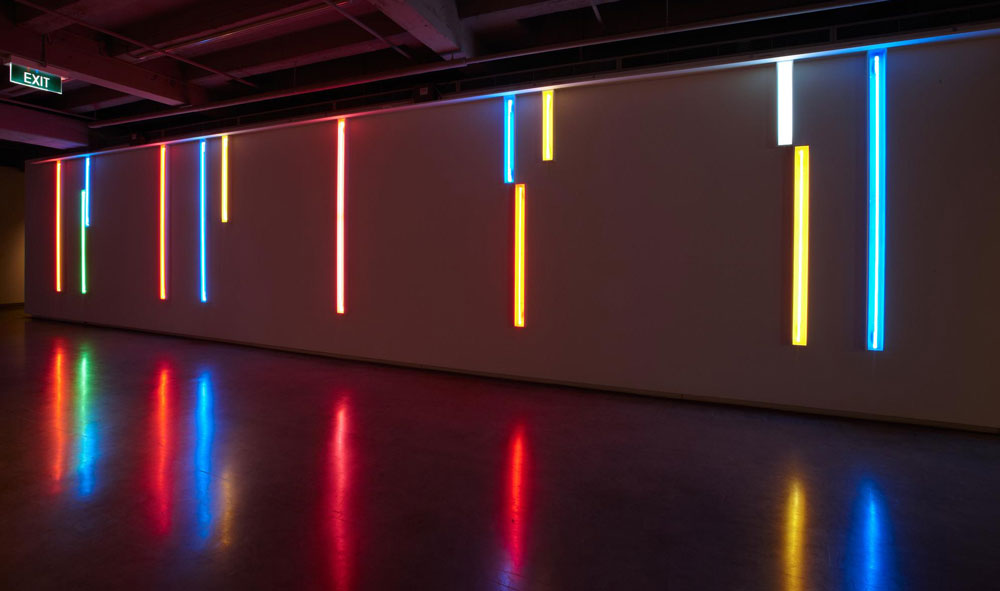