Opinion: Climate Change and the church

There have been many times I have driven by a particular church along Limestone Ave and have thought about another church and pub on Broadway just south of the Sydney CBD.

Dear old St Barnabas Church burnt down in May 2006. It has since been replaced with a brand new building.

Before the fire, the church was an icon for anyone driving down Broadway into Sydney because of its signage in front of the church that could be read by passing motorists. The church used to frequently change the wording and this was matched by the pub across the road. The banter between the two sets of signs became known as the “Priest and the Publican”.

I remember fondly how you had to be quick or ask a passenger to read at least one of the signs. It was a dangerous activity to read both as each was on opposite sides of the very wide street and at that point the traffic usually became squeezed across multiple lanes.

Here’s an example of the signs (taken from Wikipedia) – and sorry I have searched the web for some images of the old signs, but no luck so far.

“This church is for sinners,” one poster announced. “This pub is for drinkers,” the publican replied. Other gems include:

Church: Money does not make you happy.
Pub: I’d rather be rich and happy than poor and happy.

Church: God made sex for marriage not for money.
Pub: Wish he had made money for marriage.

Church:The best things in life aren’t things.
Pub: Things are not all what they seem to be.

The Church here in Canberra, Ainslie Church of Christ, has wording on their sign that sometimes begs a response. I have even thought of hiring space in one of the neighbour’s yard to get things going.

In the days leading into Christmas I started to worry as the sign went blank. Was there no Christian message for us sinners for the Christmas break? However at the last-minute a very oblique message did appear.

Then as I drove by just a week ago, there was a brand new message. This one really caught me out. The church has decided to send a message about climate change.

In these days when most people seemed to have been either fooled by the media or have become complicit by saying nothing, it is a welcomed sight to see this sign broadcasting a succinct message to the passing traffic.

The timing was important. Canberra had just had a week with day time temperatures around and above 40 Degree Celsius. It was hot!!! Plants shriveled. Note the ‘grass’ in the photograph below, it was completely dry.

There were debates about whether this length of extreme weather was linked to climate change. There were all the usual stupid responses from the reactionary press, climate deniers and their followers. As the weather cooled the topic disappeared from the media.

And here we have it – a church keeping the topic of climate change issue alive. Now that’s what I call being responsible. Well done Minister. 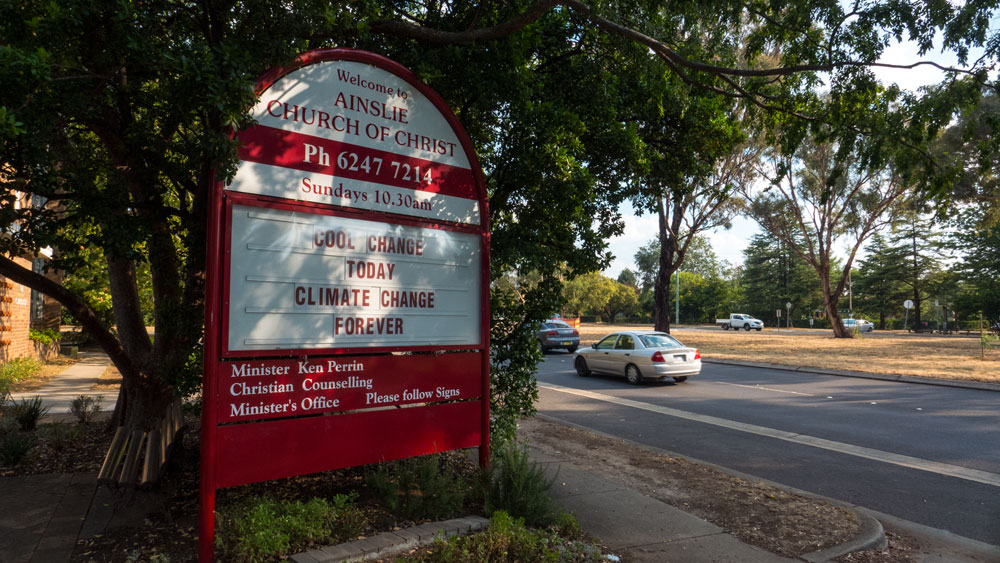 What would be my response? Maybe something as simple:

Oh to be so cool!