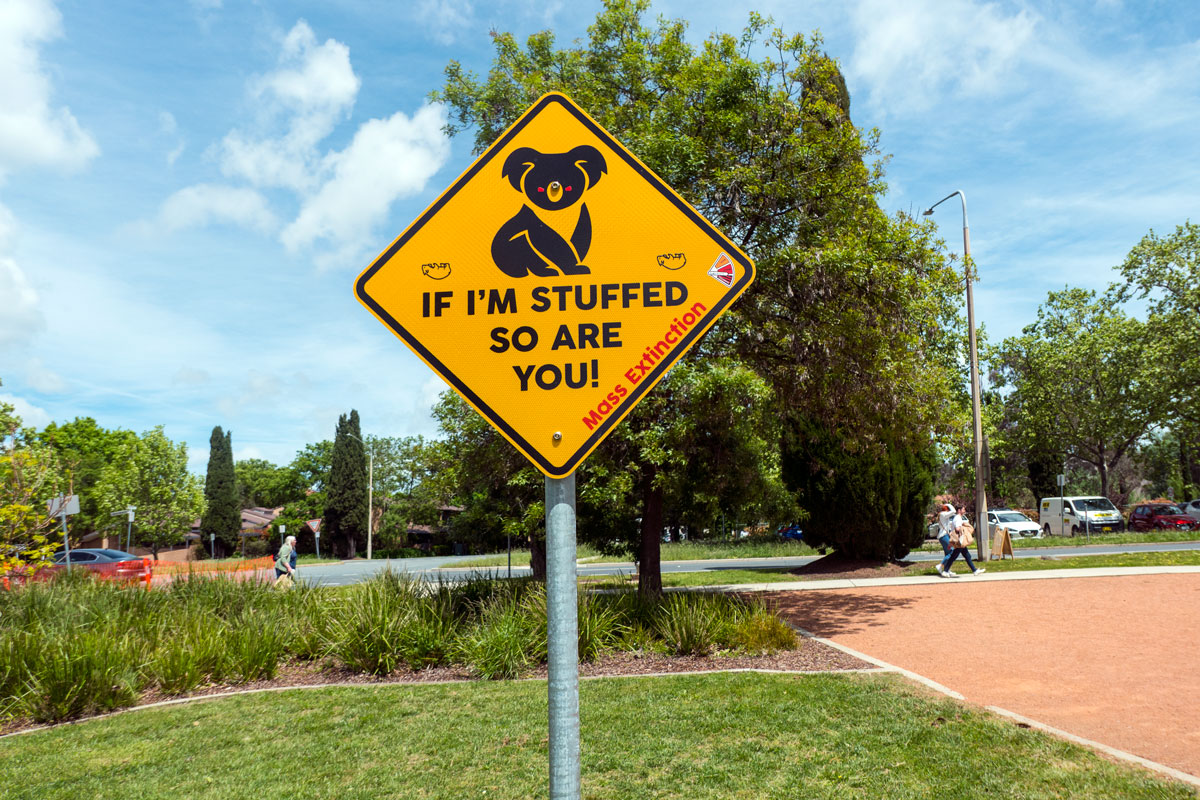 Looking at the creative political sign in front of the Kingston Glass Workshop in October (now removed), the message was clear.

We need to get our act together otherwise, just as with the Koalas, we are stuffed. This message is not new. The progressive advocate writer, Clive Hamilton, has been on this case since the mid 1990s.

I bought his new book, Provocateur. Five days later it was read.

This is an accessible book about his life as an advocate and writer and it is stacked with intriguing tales. There are comments on people Clive encountered as he pursued his interests for over the three decades through the publishing of 34 books. Many of these encounters were not pleasant experiences. 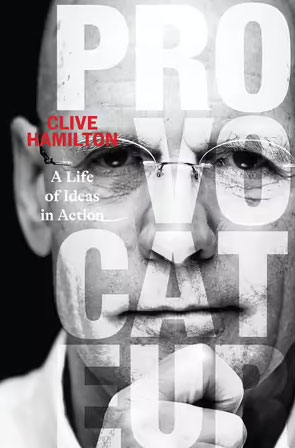 He tells how people and organisations reacted to what he wrote in his books and as a public advocate speaking about what he was wanting people to pay more attention to. Conflicts and frustrations dominated his two decades of seeking more climate action. Hence my connection to the koala and the message.

Understandably Clive wound down his climate advocacy in 2017. He moved his focus to a political matter that he considered was not getting the serious attention in Australia. This was the influence of the Chinese Communist Party/ Government on sectors of Australian governments, business and society.

This one really came back to bite him. He was forced to watch his back, be conscious of who was nearby in a restaurant, discovered stuff hidden on his computer, his National Library book shelf was searched, and people nearby would use their phones to hack into his. It makes for a good read.

Some very well-known names made it their business to attack him.

One astonishing story was about the publishing of the 2018 book, Silent Invasion: China’s Influence in Australia. The original publisher pulled out in 2017. The speculation was that they feared being targeted. Other well-known publishers ran for cover, again as if they saw the topic too hot to handle. It was not because it would not sell well.

Eventually the publisher, Hardie Grant, happily took on the challenge of what may come their way. Freedom of the press Australian style won out – sort of. The details around Clive’s efforts to have this book published will make you think about how could this happen in this democratic country.

Having read Provocateur, Clive Hamilton is definitely to be seen as a national treasure, as a voice, researcher and writer to be celebrated, recognised and honoured.

However, there are a few points to be made. What’s the point of writing an opinion piece without questioning something about the man and his views.

In 2009 he was unsuccessful as the Greens candidate for the federal seat of Higgins in Victoria. This was out of character for this advocate who generally avoids committees and political structures.

This incident plus a few comments indicate a national alliance with The Greens. There’s also a hint of support for the ACT Greens. The Australia Institute (which he set up but is no longer directly involved with) has spoken publicly about the progressive politics of the ACT Greens.

These are the same ACT Greens who are party to evicting ACT Housing tenants, signed off on the sale of multiple social housing complexes to pay for the tram, have overseen the building of heat island suburbs for the last decade and who look the other way while established suburbs are being de-greened and their biodiversity diminished.

This is an unfortunate soft spot in Clive Hamilton’s ability to be objective.

Clive Hamilton lives in Canberra and would be aware of the corrupted urban development and planning that is happening in his own backyard – his city. Homelessness and social housing programs are a disgrace given the wealth of this country.

Yet he chooses to not speak up about such things. Again, this is a reference also to the sign as artwork by Ian Hubbard above. We are stuffed!

Despite these criticisms, Clive Hamilton has achieved a remarkable output of books and has initiated and participated in important national debates.

I strongly recommend Provocateur by Clive Hamilton as a gift for others or for yourself this Christmas.