The Biennale at the MCA is a very mixed lot. On the day we visited, a Sunday, there were showers outside and maybe that was why there were so many people in the gallery. It was very busy with all sorts of people. I asked about this and was told that Sundays can be busy but this one was definitely the busiest.

The first work was a large room with video images across three walls and loads of people watching by stretching out as if on the beach. With of course, the consistent lights from mobile phones. This piece was a very simple concept blown up super large using technology to have the images across the three walls. It was impressive in size but devoid of any depth. My thought was that technology is still the things that many artists have yet to come to grips with.

The next room was completely taken over with the floor being painted multicolored stripes. With so many people wandering in it became like a fun parlour. I do not think there was much contemplation going on in this large space. There was lots of noise from people enjoying the novelty. Many taking the opportunity to pose for photographs.

I think by now you can see where this review is going. While there was some interesting works in the exhibition, most of place was taken over by noise from all the crowds mixed with the sounds of many video works. It was a noisy place.

There are two photographic based artists towards the end of the top floor of the Biennale.

One is John Stezaber who has produced some simple surrealist style photographic collages.

His combination of images in most cases does bring on a new interpretation of the original photographs.

These are fun. And strange. People seemed to have been enjoying these.

Here’s some background to  John Stezaker as written up in the Guardian. click here

In  aside room at the end of the long corridor upstairs is a video that was very much enjoyed by the few who managed to see what it was about and then stayed for the full production. 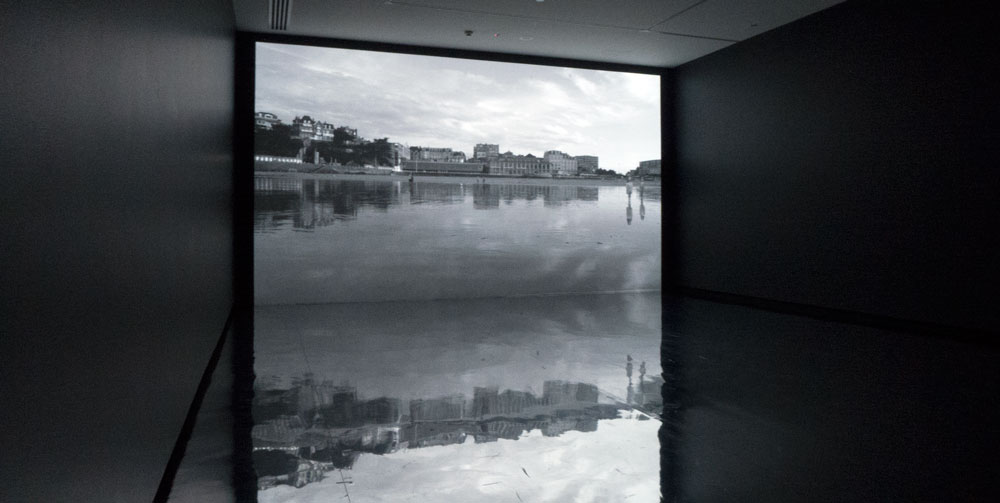 Curiously the blurb for Biennale is not quite right in how they describe this work. They say that people are seen from many perspectives and they look as though they are waiting for something. In fact the whole thing is about capturing a moment when people near and far from the middle of the scene realise that something has happened. The question is what has caught their attention on what looks like a quiet day at the beach?

The video is made up of an amazing number of still images that capture heaps of the details of the moment when something happened. People are caught turning, staring, wondering and looking off to the distant to catch a glimpse of the event. 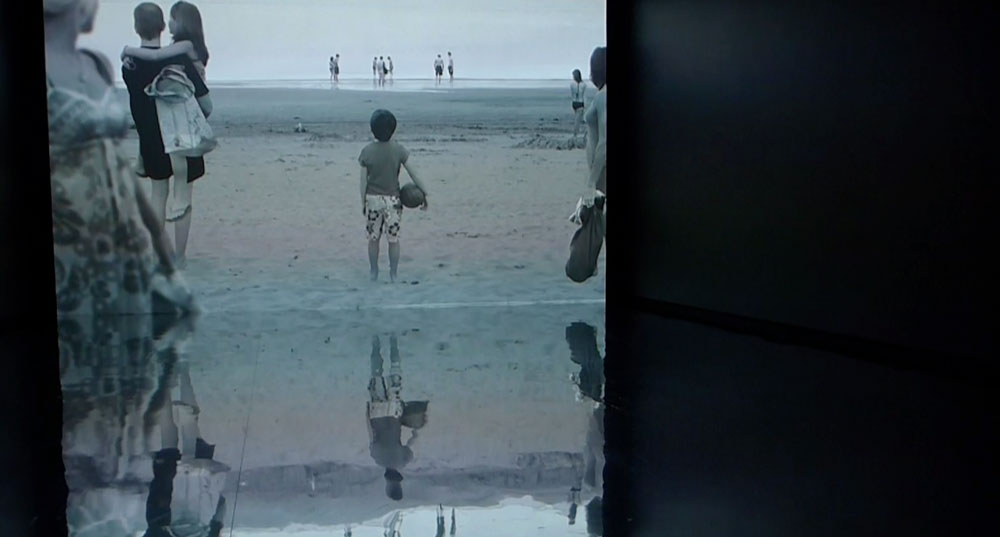 So many videos in these exhibitions have sound tracks that then interfere with the viewing of other works outside the video-viewing room. In this case, the video has a quiet sound track but the room is situation nearby to other activities. As you sit and watch, the room is bombarded with the noise of people passing and children outside. Occasionally parents brought in children who then ran around.

Some people walked in and were taken by the reflecting floor, took a photo, and then left. It was not the quiet experience it was meant to be. But it is a stunning work.

And what happened? A child had splashed his hands in the water’s edge. In other words, in this video, the whole seaside and surrounds came to a halt because of this remarkably small event. Very french!

It was definitely worth the visit. I have doubts about so much of today’s video work in exhibitions. There will be more comments to follow on the 2014 Biennale of Sydney at the Art Gallery of NSW as well as some overall thoughts.

and Part 3: Overall comments (yet to be published)

Recommended: Rating 7/10 (but go on a quieter day)