Whitechapel as shown on TV 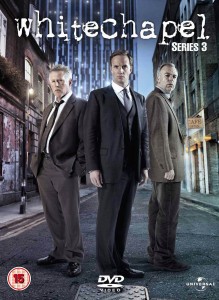 I actually watch very little live television these days. Most of the programs I watch are bought on DVD. I am yet to do much downloading as I was waiting for the NBN* to arrive (foolish me).

Whitechapel is one of the few exceptions. I have watched this program from the start. We are now in Season Four. The main actors are in interesting bunch and I happen to like good crime and detective stories. Maybe I have been watching too many crime programs of late. In this case I suggest the writers have screwed the plot and this one has descended into farce.

What started out in the earlier seasons with some of the usual stuff. Namely there is the lead detective inspector with a problem in his life and has to impress his superiors. He has a far more experienced detective sergeant and they have to progress through some difficulties until they establish a working relationship based on how their own strengths and weaknesses compliment each other to result in an effective team effort.

All good so far. Then thrown  in some difficult cases and play with the ghosts of the Whitechapel area in London, and there is the makings of some complex crimes to be investigated.

But along the way through Series Three and now into Series Four the writers have let themselves completely go. We now have high level macabre and the supernatural in full flight. As for the characters, anything seems possible as their own lives become more complicated and start to unravel.

Then there is the strange police station itself. It is in London yet the lights do not work properly, strange phone calls are put through, the plumbing functions sometimes and there are all sorts of people showing up in the office upstairs who seemed to have slipped past any form of front door security.

In the end Season Four has descended into some for of send up of itself and of the various art forms it has taken on board.

The story line has become far too complex or in truth it is now just plain silly. It has become very gruesome. The original reasons for liking the program, the strong cast, have faded. This is now relegated to being program I do not watch.

And I have to say that having been to Whitechapel several times, including the local markets and the great Whitechapel Gallery, I suspects the locals would not be overjoyed about how their historically interesting and now vibrant neighbourhoods are being portrayed to the rest of the world.

Originally I may have given this program a rating of about 7/10. but right now:

footnote: the NBN is the national broadband network that was one of the key programs of the previous federal government. This was due to deliver broadband fibre connections to homes and businesses across Australia. In my area this was to be next year. The new conservative federal government has ceased the program and wishes to introduce it as fibre to the node. This means it will be broadband to a box in the neighbourhood and then old copper wire system to the household (and you will need to pay for the last connection). This will result in a much slower connection than we were about to receive through the original NBN. I regard the new system more as ‘fibre to the nerd‘.